Thursday night at a mega sold out Wrongbar, California four-piece synth poppers Abe Vigoda and one man dream wave band Wild Nothing showed Toronto what all the fuzzed out hype was about.

We’ve been really digging Virginia’s Wild Nothing and their lo-fi sound over the past half year, and perhaps we put too much faith in how amazing we thought they’d be live. Now, we’re not saying we didn’t enjoy Jack Tatum’s live performance along with his band, but his song writing abilities definitely played a huge part in his somewhat introverted stage presence. After a feedback heavy start to the set, following openers Abe Vigoda’s natural energy, Wild Nothing live seemed a bit amateur in conparision.

But for those who decided to stick it out through the technical difficulties, the band played all the heavy favourites off Gemini (even tough they started and stopped to some degree) including “Chinatown” and “Confirmation”. We were almost heading out the door, nearing the end of the set, when they played “Golden Haze”, which was the track that had us smitten with them a few months back.

They definitely have a long way to come when it comes to touring, especially in comparison to Abe Vigoda, but they still managed to play a pretty good set, after a rather rocky start. 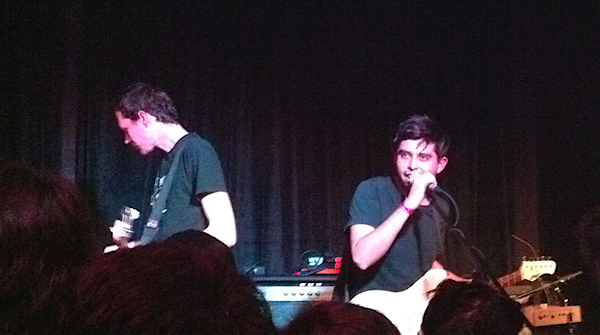