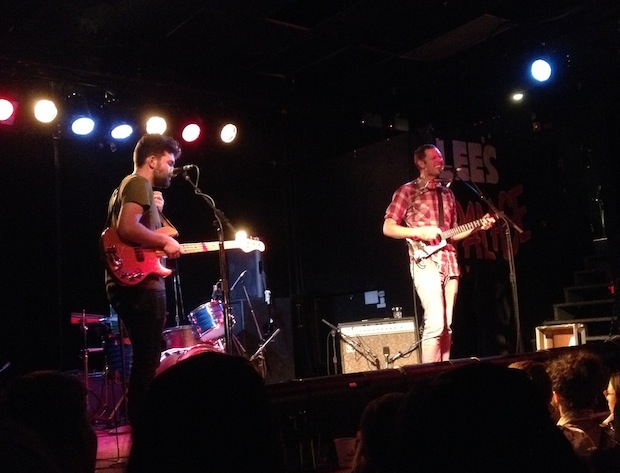 There’s a certain species of Canadian musicians who seem to thrive in insular spaces. Notoriously housebound renaissance man Chad VanGaalen, despite his unaffected charm and easy stage presence, gives me the impression he’s probably happiest tinkering away like a mad scientist in a basement full of arcane musical toys. But then there’s another element to his music that gives me the impression he is the progeny of green space creatures who conceived him while listening to the Flaming Lips and Syd Barrett. This wild and wonderful dichotomy was on full display during Chad’s performance at Lee’s Palace this weekend.

The show of Saturday kicked off with these words: “Cut off both my hands / And threw them in the sand / Watched them swim away from me / Like a pair of bloody crabs” – the opening lines from the song “Cut off My Hands”. This track from Chad’s latest album Shrink Dust was just the opening salvo for what turned out to be a rather surreal experience. Part of VanGaalen’s charm is this ability to juxtapose slightly off-kilter but folksy arrangements with distinctly bizarre, Lynchian imagery.

The night’s setlist was heavy on the songs from the new album, including the haunting “Where Are You”. While the studio version of the song is trademark VanGaalen – drenched in cavernous reverb, layered with distinctly lo-fi sound effects but always counterbalanced with VanGaalen’s plaintive delivery, the live version was a different beast altogether. While the reverb was still very much present, and his vocals were as emotive as ever, the instrumentation for the song dispensed with the bells and whistles and dug into punk-rock DNA of the song buried in the mix.

The same was true for “Peace on the Rise,” an understated, folksy number off of Shrink Dust that acquired a fair bit more grit and fuzz during the live set. Again, the quirks of VanGaalen’s left-of-centre imagination was on full display – the quiet, pastoral beauty of “Trees were singing love songs/Drowning in the maze of a summer” undercut by references to interstellar space being broken into. Makes you wonder what kind of fever dreams VanGaalen has been suffering through while holed up in his Alberta home.

What was clear by the end of the show, however, is that what we have in Chad VanGaalen is a truly singular Canadian artist. While he might be classified peripherally as a folk musician, he is miles away from the campfire hymns of Gordon Lightfoot and the like. Rather, by incorporating new elements into his sonic palate – grotesque, sci-fi imagery, otherworldly sound effects, etc., he is blazing a new trail and redefining what is means to be a modern, independent folk artist in Canada.