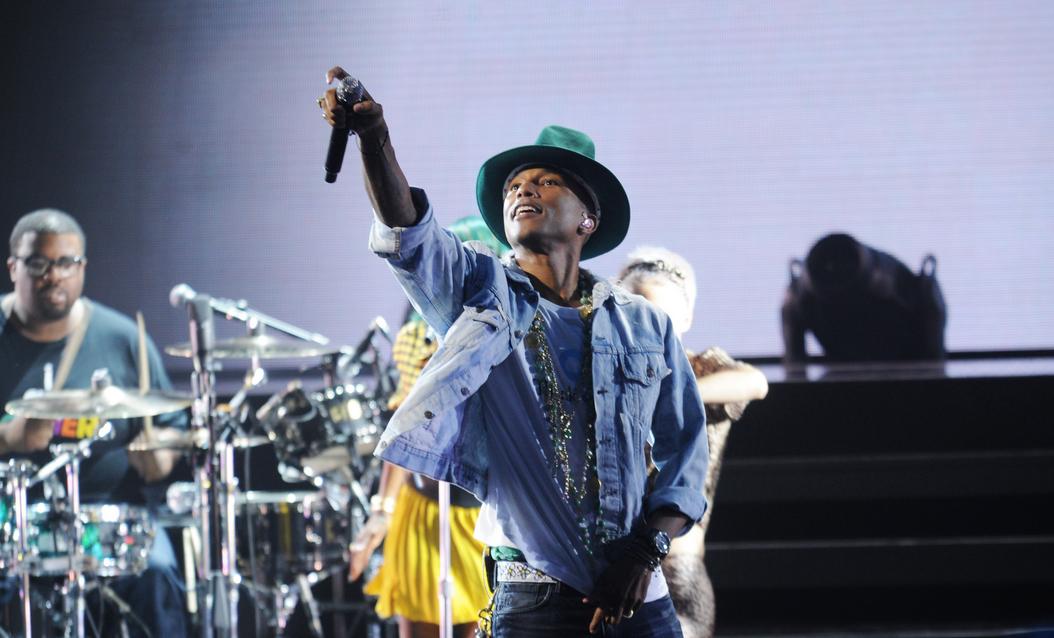 House and stage lights were off as Pharrell Williams posed beneath a trembling spotlight in Harlem’s iconic Apollo Theatre. The stage lights suddenly illuminated the producer as his falsetto ratcheted into “Lose Yourself to Dance”. He poured over the cheering audience as he moved down the set-stairs joined by six backup dancers while rocking his signature buffalo hat. Supported by a live six-piece band Williams racked through his repertoire of popular songs during his two decade reign. “You guys know me. I make beats.” Williams later said, “I make music.”

The 60 minute set began promptly at 9pm and was broadcast internationally via Vevo and YouTube as part of the 14thinstallment of American Express’s Unstaged. As we mentioned in our last post, Unstaged is all about Amex’s commitment to service and providing exclusive access to premium experiences and this was echoed throughout the night by Pharrell’s shout outs to the company. I had the opportunity to experience the #AmexEffect firsthand and it was awesome!

Earlier during rehearsals, legendary director Spike Lee sat in fixed concentration in a trailer behind the theatre filled with a wall of monitors. He directed shots and called out camera numbers to focus on during the live show.

During the performance cameras occasionally swept into the audience’s view, but the live experience wasn’t tarnished by the production. While live streaming viewers were able to choose their preferred camera angle of the live concert and were engaged online by tweeting to unlock exclusive digital content or receive a digital autographed image of Williams. Previous Amex Unstaged performers include St. Vincent in collaboration with designer Diane von Furstenberg and Jack White with Gary Oleman.

Surprise guest appearances throughout Williams’ performance included rappers Busta Rhymes, who growled the chorus of 2002 hit, “Pass The Courvoisier Part II” and Atlanta native T. I. who surged on stage for Robin Thicke’s “Blurred Lines” as the audience danced and sang along. In tribute to the album cover of his recent release Girl, backup dancers lithely moved on stage in white robes and sunglasses while “Hunter” rang through the theatre.

The drums thundered as members of the crowd nodded their heads and extended their arms to N.E.R.D. tune, “She Wants to Move”. Snoop Dogg hits “Beautiful” and “Drop it Like it’s Hot” were also among the packed set-list of radio favourites and later the opening to Neptunes produced and co-written song, “Hot in Herre”, by southern rapper Nelly got girls in floor seats dancing in the aisles. The night wound to a close as the audience danced to recent releases “Aerosol Can” and “Get Lucky”. Finishing with his most recent chart-dominating tune, “Happy”, the feel-good performance was filled with clapping and choreographed dance moves.
Williams’ closed by saying “Thank you [American Express] for bringing me closer to my fans,” in addition to thanking the live audience before him as well as those at home watching online.

American Express Unstaged is great example of Amex’s dedication to making Cardmembers and non-Cardmembers feel more than just a customer.If you missed the show you can catch the rebroadcast at www.amexunstaged.com. Stay tuned for the next Amex UNSTAGED. I know I will!