Lightspeed Champion ‘Life Is Sweet! Nice to Meet You.’ 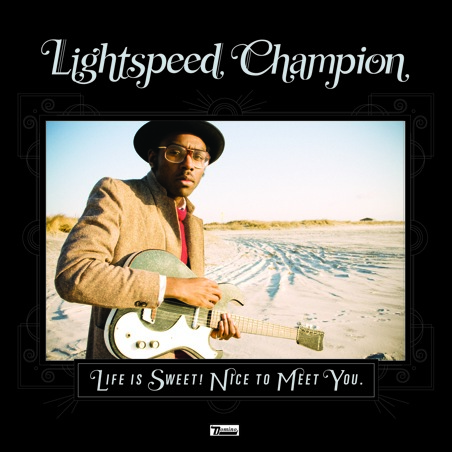 Hurray!  According to Pitchfork former Test Icicles member Dev Hynes aka Lightspeed Champion has announced the release date and track-listing for his sophomore album  Life Is Sweet! Nice to Meet You. Hynes as Lightspeed Champion turned heads, and impressed everyone when he released Falling Off the Lavender Bridge in early 2008, with his radical departure from the Dance-Punk sounds of his former band to create a very soulful, acoustic guitar driven album, heavily influenced by the musical stylings of the American Mid-West. This may not seem like all that big a deal until you factor in that Hynes is from London England but moved to Omaha, Nebraska to record his debut album with Saddle Creek producer Mike Mogis, most famous for his involvement with the band Bright Eyes.  One rarely sees a shift from a global metropolis to Middle America for cultural influence, but hey, if it works, why not?  Whatever the motive for the musical genre shifting, the choice paid off and Lightspeed Champion is ranked highly in my iTunes, and continues to be in heavy rotation.

Life Is Sweet! Nice to Meet You, features 16 tracks recorded and mixed with Ben Allen, who recently worked with Animal Collective and Gnarls Barkley. According to a press release, “Lightspeed’s early leaning towards American country dressings is traded here for a palette that draws on classical music and even musical theatre… joltingly ’70s guitar and synth sounds, classical piano, Greek choruses shouting reprisals, and at least one ukulele-driven moment.”

The album’s lead single, “Marlene,” will be released on January 25 and the full album will be out February 1.

Life is Sweet! Nice to Meet You: