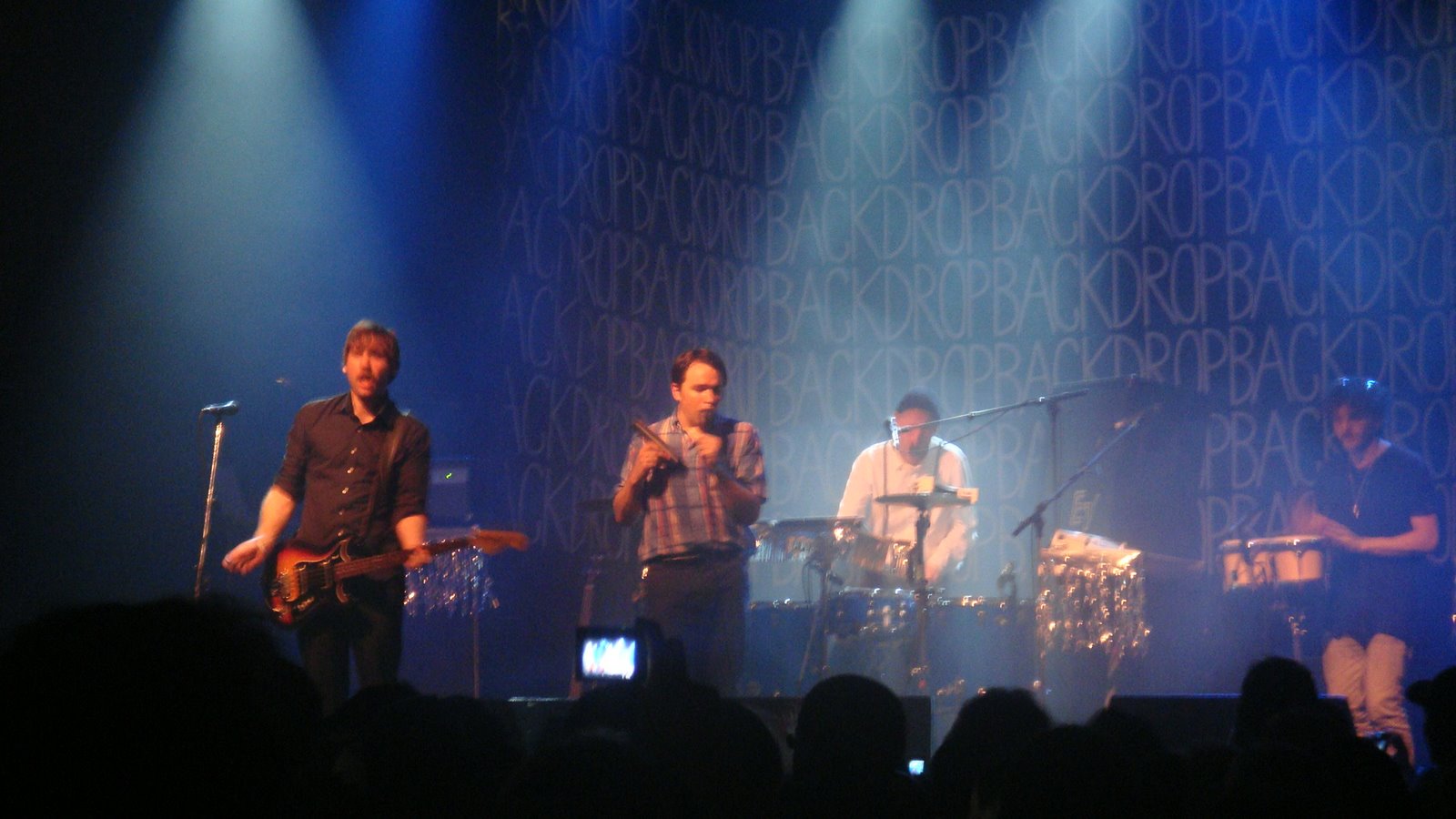 Last night I went to see Swedish indie rock sensation Peter Bjorn and John live at the Phoenix Concert Theater here in Toronto. They are best known for the 2006 single “Young Folks”, which featured Victoria Bergsman, formerly of The Concretes, and was on every one’s party mix for an entire year after it dropped. In fact the dude who lives beneath me still has this song as his ring-tone, and I can hear it every now and then… it makes me laugh.

I had very little expectations about this show, I had purchased the tickets on whim one day while I was at work mourning the loss of concerts to attend. When I saw that PB & J were coming to town, I thought “why not?” and thus here we are. They were surprisingly good live. I suppose that because of the worldwide success and consequential over-playing of “Young Folks” I discounted their actual musical talent and had written them off as a one hit wonder band.

Don’t get me wrong I thoroughly enjoyed their debut album Writers Block when it came out back in 2006 but because of the obnoxious ever-presence of “Young Folks” I never listened to the album again after my initial romance with it. Around the time that I bought these tickets PB & J had just released their follow-up album Living Thing and I had been listening to it for a couple of days prior to. I suppose that was the marketing strategy there… well done. However, I was still skeptical because of the instant celebrity that their live performance would leave me wanting. So I was curious to attend.

Any concert at the Phoenix is going to be a rocking good time, guaranteed… EXCEPT if it is on a Saturday night. The reason for this is that on Saturday night Phoenix holds its live-to-air rock club night and every concert is thus regulated to the time-slot of “early show.” Along time ago I learned my lesson with going to “early show “concerts at the Phoenix. Which is show up on time ! Because Phoenix is ending that concert promptly at 9:00 o’clock.

This lesson I learned the hard way, when I showed up to see a band I had been dying to see and as soon as I walked in they thanked everyone for showing up and proceeded to leave the stage. Since then, I am prompt and punctual! I do always feel bad for the bands that end up performing in this time slot, because even they know this is fucked up! Not only that but when PB & J took the stage the venue was barely halfway to capacity. In fact, as I was getting ready to leave by the second last song in the encore people were still coming in saying they hoped they didn’t miss much. It was sad, and I felt bad for them.

Other than this slight particularity of the Phoenix the show was great. At first I wasn’t fully feeling it but there was a song played around the half way point that finally got me bouncing and bobbing along, sadly I am not sure what song it was. My reservation about their musical talent melted away after watching them perform, and now I have a better appreciation for them as a band and musicians.

I feel that it is almost a shame that “Young Folks” was so popular because in a way it has pigeon-holed them. However, I strongly suggest you check them out if you haven’t heard them before, or listen to “Young Folks” and find out that you already know who they are! Oh and their stage decoration was cool. They had a backdrop that had “Back Drop” written repeatedly across it and at the corners inverted to give it a three-dimensional effect.