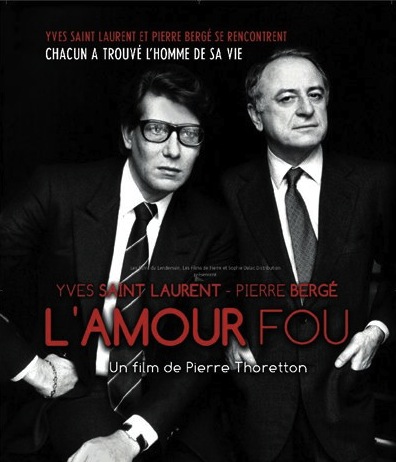 In the midst of fashion week season this lovely little documentary by Pierre Thoretton takes us inside Yves Saint Laurent and Pierre BergÃ©’sÂ lifelong relationship.

Unlike other films about Saint Laurent, the film puts fashion on the back burner to shed new light on the 50 year long love the couple shared both in and out of the spotlight.

The title literally translates into ‘mad love’ which is indicative of the great level of intimacy the couple had together and is also the title of a Jacques Rivette film and a book by AndrÃ© Breton (though Thoretton says the film has no relation to these works).

Here’s what Pierre Thoretton had to say in an interview with Dazed about the work:

I started making a film about the art collection they had purchased over years â€“ but I soon realized that what made the most sense was them. The collection was all them, it was their Å“uvre, it was an intimate reflection of their couple, not a demonstration of power or money. It was entirely led by their taste, by their desire to be surrounded by things they love.

It premiered last week during TIFF to wild acclaim (standing ovation and everything) and was released yesterday in FrenchÂ cinemas. Watch the preview below.