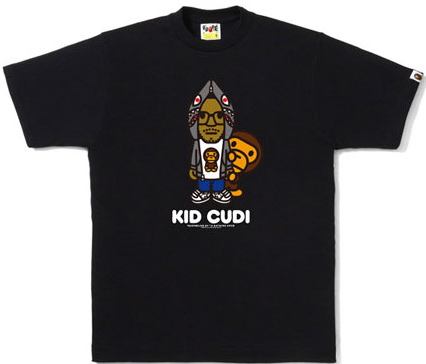 Here we go again! The Los Angeles BAPE STORE® will be releasing a limited edition Kid Cudi x Milo t-shirt on Sunday, December 20th, 2009. The t-shirt features an almost identical image to the one released for the New York store,  however this time around the Cudi cartoon is wearing a grey shark hoodie, instead of the red, as well as a Baby Milo tee. Featured on the back is the following quote: “General Cudder says…. Take another shot or you’re soft! Rage!”

I wish I was in LA, as the shirts are released at noon, with Kid Cudi making an appearance for autographs and photos.