After a pandemic pause, Collision returned to Toronto with some noticeable changes: more female speakers and startups.

For four days the Enercare Building played host to 340 women-led startups, with a total showcase of 1,557 startups representing 130 countries worldwide. While there were some unfortunate passport problems, and a number of crypto companies pulled out last minute, the event went on to welcome a large audience, engaging off-site meetups, a chess showdown with world class chess champion, Garry Kasparov, and a lot of “it’s so great to meet in real life!” moments.

200 startups have signed on as part of AMPLIFY, a Collision-run initiative to support under represented communities.

274 startups were selected to continue their operation’s work on the UN Sustainable Development Goals.

The York Region pavilion hosted a session with Canadian automotive businessman Frank Stronach, who unveiled his plans for the SARIT EV micro-mobility plant. Also, the region’s three tech accelerators — Treefrog, YSpace, ventureLAB — announced they are expanding. We were told by a York Region representative that 800 new jobs will be created over the next three to five years. 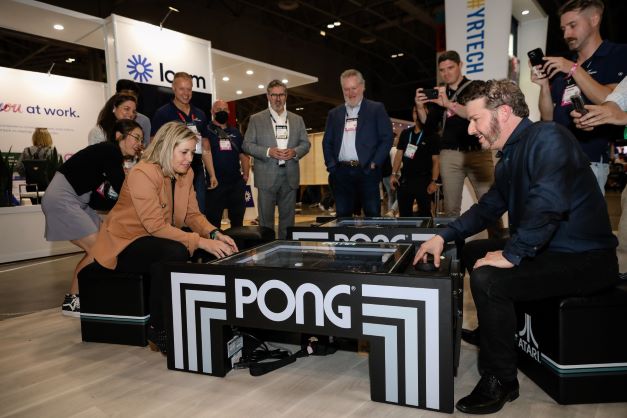 Tech experts Amber MacArthur and Marc Saltzman challenged each other to an ATARI Pong game.

Champagne said he wants Canada to lead in manufacturing and innovation and placed emphasis on the future of the car, which he believes “will basically be a car on wheels with a battery.” He said he had just come from Germany where he met with car manufactures and that he would soon be in Japan to meet with “semiconductor, chip, and battery manufacturers.”

“AI, quantum [computing], and cybersecurity will power everything from aerospace to car manufacturing,” Champagne said. 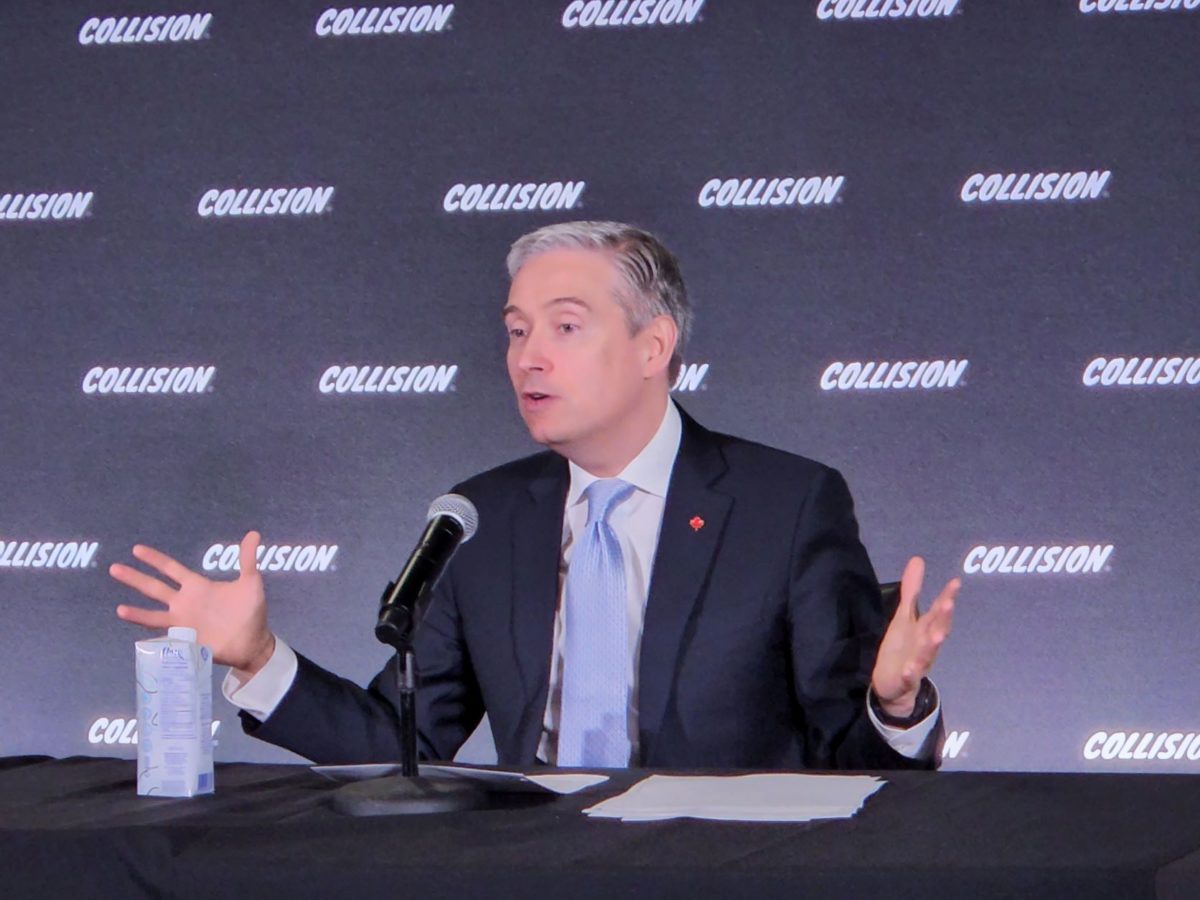 François-Philippe Champagne speaks during a press conference at Collision 2022 in Toronto.


Talks about supply chains were mixed with conversations on password management, and startup founders pitched their businesses while onlookers took it all in. Google Cloud, RBC, Interac, TikTok, KPMG, and AWS were among the 250 global partners. Over 750 investors attended.

This year’s PITCH winner, which sees a series of live onstage pitching battles from early-stage startups, was Dot Mind Unlocked. The company uses a Dot headset and a proprietary mobile app that reads brainwaves. It can be used by healthcare providers and for help with therapy courses. The company was founded by McGill University’s Yishel Khan who said the team is now looking to raise a round of US$3 million to bring their product to market. If successful, they plan to launch the Dot headset as a clinical product in 2024.

Toronto’s 1Password (which has been around for 16 years) announced a new arm of the company, Insights, so that businesses can gather recommendations to improve their security hygiene. Jeff Shiner, CEO of 1Password, spoke about this on stage.

“People are two times more likely to reuse a password, and three times as likely to say their company’s security policy isn’t as important as getting their work done. I think it is our job to make it easy for people to stay secure – that’s how we can help people,” Shiner said on stage during his chat with Anne Gaviola from Global News. 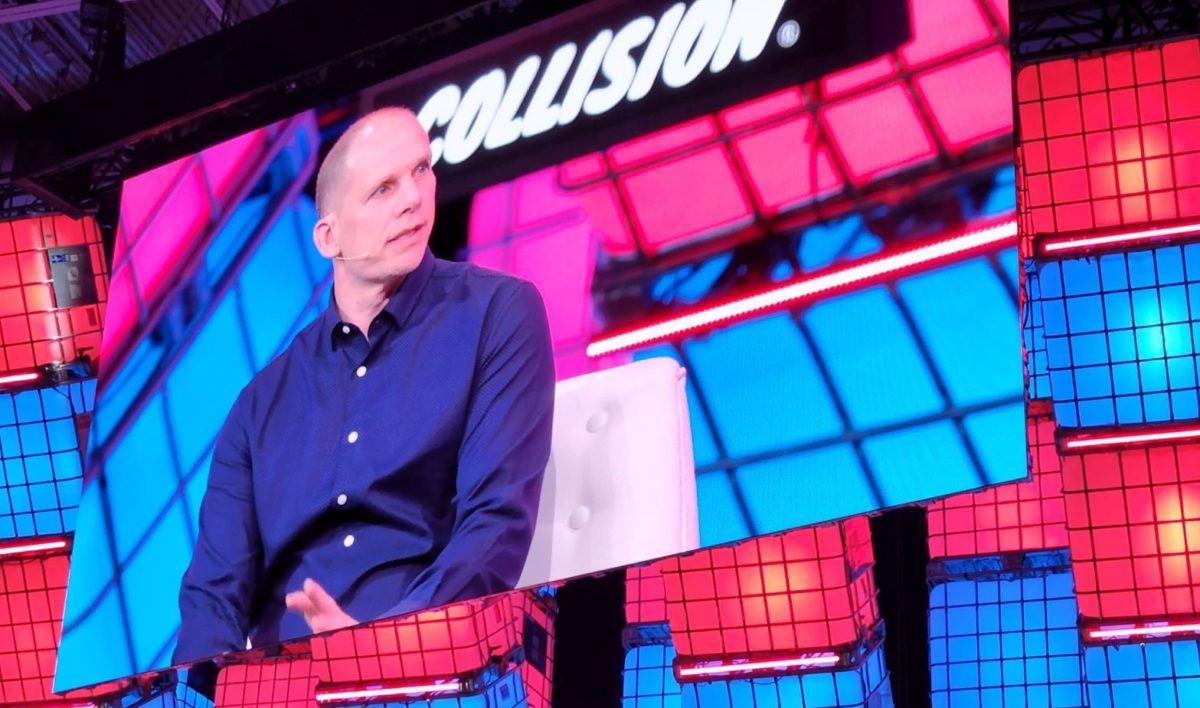 In 2021, the company surveyed 2,500 adults and found that burnout was affecting adherence to security protocols, with one in three workers citing burnout as affecting their initiative and motivation levels. Findings suggest a “21-point gap separating those who are burned out (59% of whom say they follow their companies’ rules) from those who are not (80% of who say they follow the rules).”

He also talked about how working from home has created an environment of security challenges as a result of managing personal and professional devices.

“You are trying to protect the businesses and all these people have different applications on their personal devices,” Shiner said, adding that over the last 10 years, specifically the last several, there has been greater adoption of software-as-a-service (SaaS) applications.

“There’s apps for everything, which causes a security concern because everyone is trying out brand new apps all the time, to be more productive, hybrid, and companies are losing track of what apps their employees have,” he said.

Shiner also talked about his company’s relevance with a specific crowd: celebrities, noting that Ashton Kutcher and Ryan Reynolds are investors in 1Password.

The company just launched 1Password University, a free online security training resource for everyone to use. 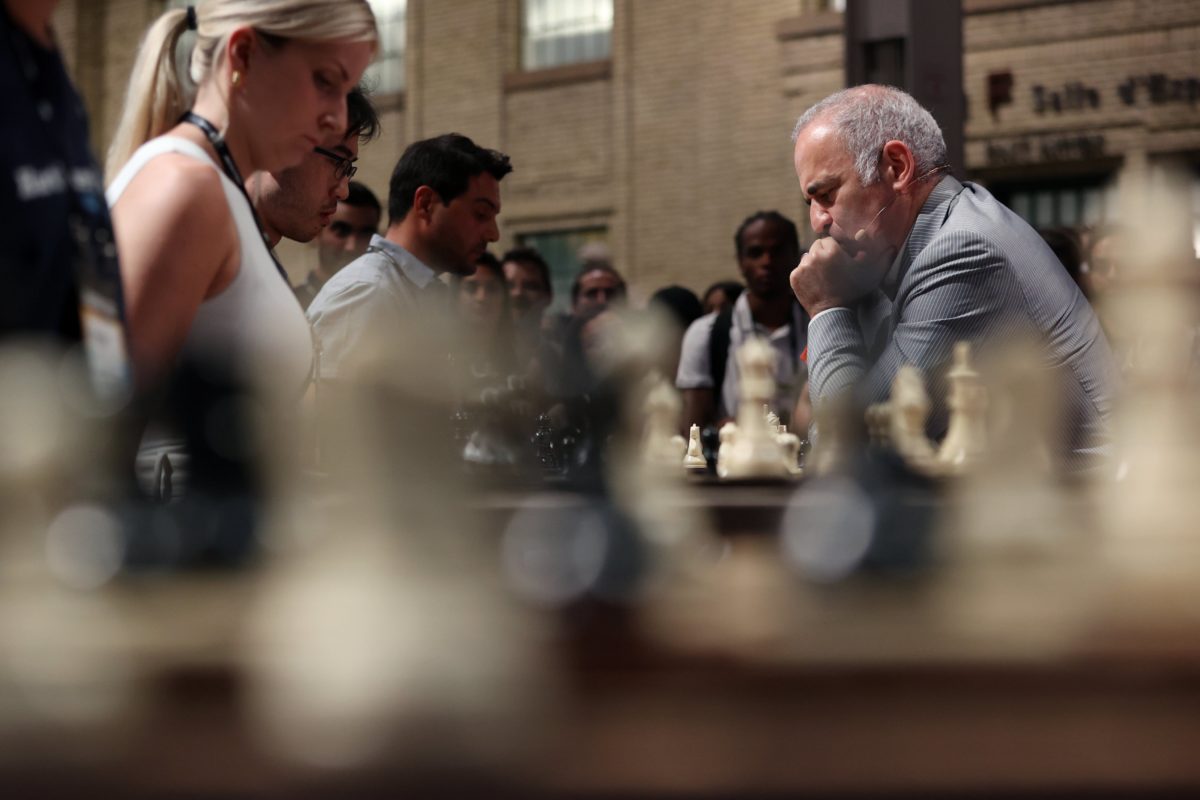 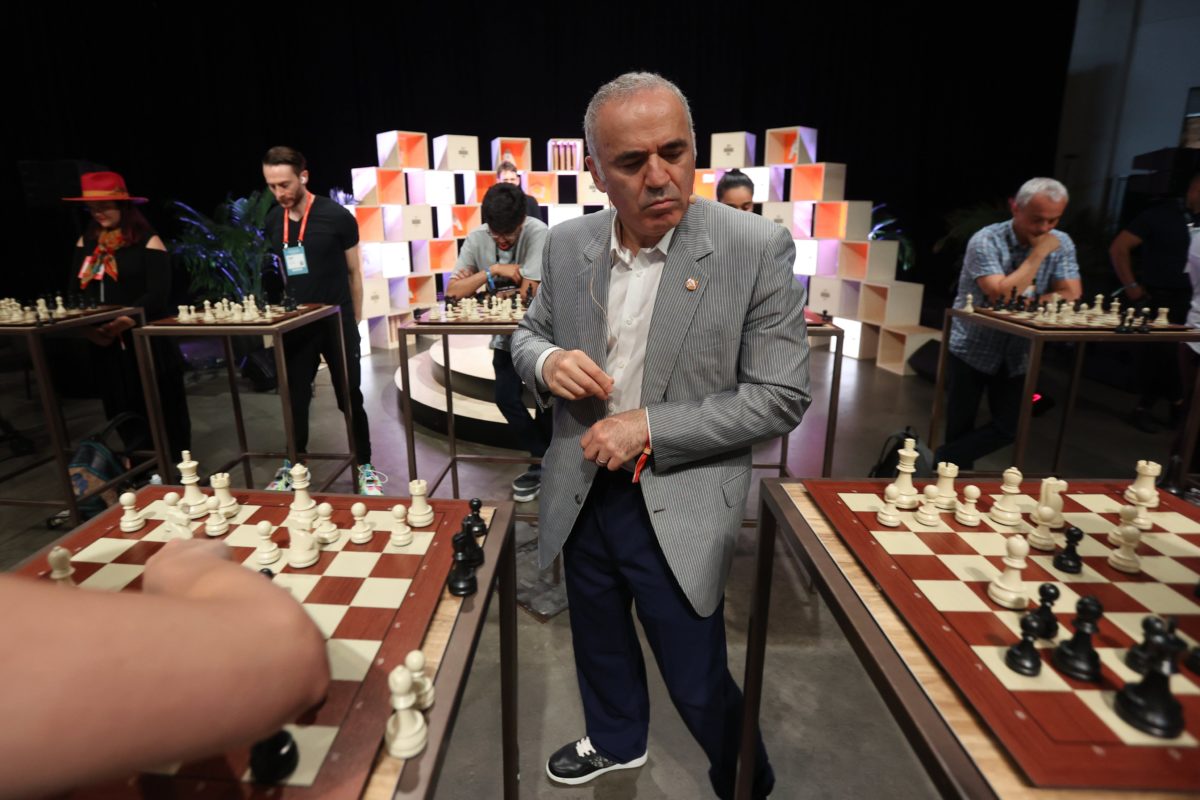 Some businesses that caught our attention:

Ala.Hause uses artificial intelligence to power the resale and exchange of items, where you can “buy, rent, sell, or lend your closets.” The company aims to reduce the carbon footprint through sharing, repairing, and recycling existing materials. A percentage of monthly earnings will go to nonprofit organizations (NGOs) working in fashion sustainability.

Unbounce, a Vancouver-based martech company, who, since 2009, has gathered over one billion data conversion points to help marketers achieve better results. The company reached gender pay parity in 2019 and has since started the Pay Up for Progress initiative which calls on companies to do the same. Over 75 companies across Canada and the U.S. (including Hootsuite, Thinkific, and Clio) have already taken the pledge.

Credivera, which claims to be the “world’s first secure, open exchange of verified credentials and digital identity solutions.” The company’s platform secures up-to-date verified credentials (which are stored in a digital wallet) to assist employers and workforces. The Canadian government, Microsoft, and Mintz Group are all customers.


VoxCell BioInnovation, which is in the business of building 3D bioprinted models, specifically in the area of tissue engineering and the drug development industry. They perform tests on human-like tissue to help reduce the amount and cost of testing on animals and humans.

Some quotes to remember:

“We want these companies and sectors to be prepared for when money isn’t easy to get, when the money becomes hard to get and they have to hunker down and figure out that they can survive for maybe a period of two to three years, because that’s when markets start resetting and recovering. When there is a reset, all the things become half the price, and resets too.” – Wesley Chan, managing partner at FPV Ventures

“The next year is about the optimization of labour. How do I make sure I have the right labour in the right places to get the right resiliency I look for to be competitive in the market and profit and get the right products to the right place at the right time. The following year is [about] investment in technology. More companies are looking to implement tech into their supply chains….that’s in the next 12 months into 2023.” – Jennifer Bisceglie, founder and CEO of Ineros 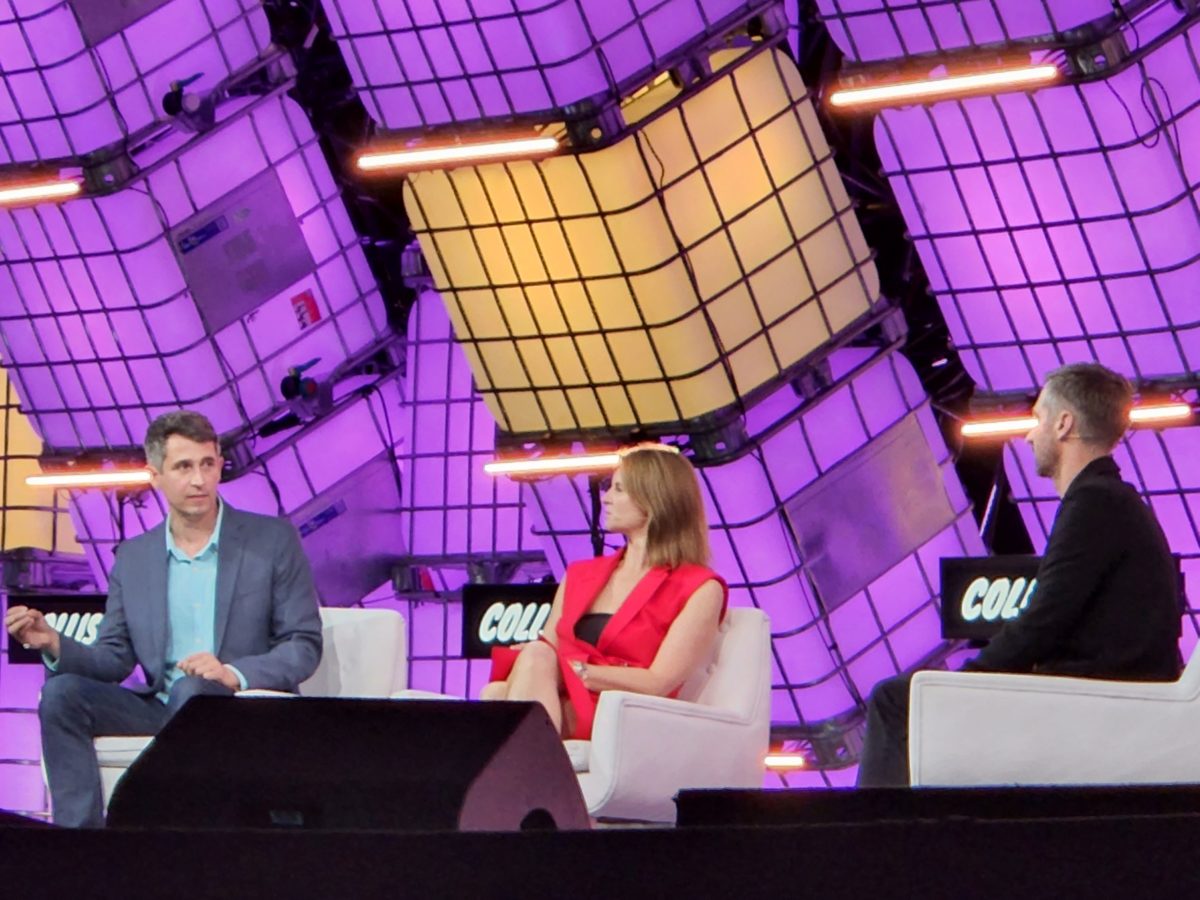 Photos of Gary Kasparov are courtesy of Collision.

Photo of Amber MacArthur and Marc Saltzman is courtesy of York Region.