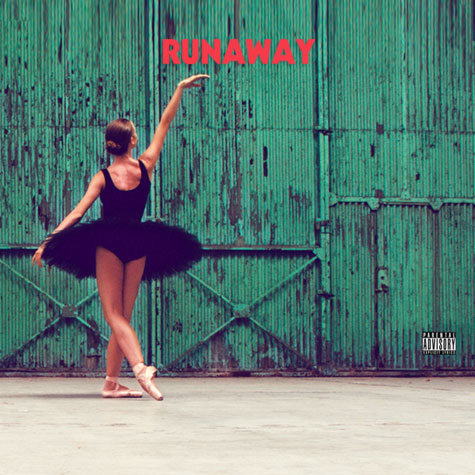 Last week Kanye West and Pusha T debuted their new single “Runaway” at the VMAs and today West unveiled the official artwork via Twitter, as seen above. This track will be the second single off of Kanye’s forthcoming fifth studio album, and so far it is looking great. Also, as you all know Pusha T is one half of my favourite rap groups, Clipse, so this song is like a dream come true for me. Along with the two official singles Kanye has released a total of 6 other tracks in so many weeks. I LOVE IT! Kanye is certifiably running the internet these days.

If you go to Kanye’s website you can preview this track in a mini-film created by Kanye, which shows a silhouette of him carrying a woman away from an explosion, as well as shots of deer, a woman clad in feather wings, and a ballet dancer. This film will will accompany the album when it hits stores in November.