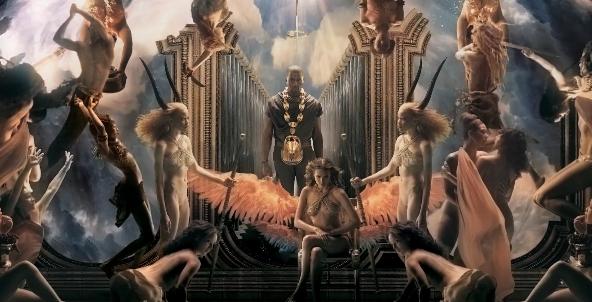 BOOM! Here it is kiddies, the first official video for “Power” from Kanye West’s as-yet-untitled forthcoming album. The video, which Mr. West proclaims is not a video, but a moving painting, shows him portrayed in a 18th century style painting surrounded by half-naked men and women. I can honestly say that I am not surprised by the aesthetic turn of pace that Kanye has taken, as it has been a somewhat slow evolution. A couple months back he started a new website (Kanyewest.com) in which all his posts were framed in ornate 18th century frames.

The video is dope, director Marco Brambilla does a good ass job, and I love the new artistic direction it has taken. My only question is why is this incredible 5 minute plus song cut down to about 90seconds? Too much time on twitter Mr. West? Oh well at least it keeps my short attention span captivated!