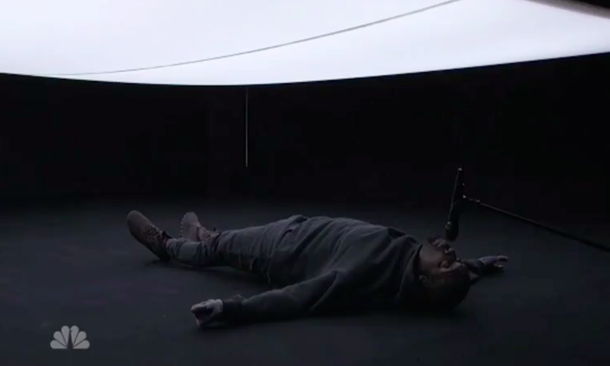 The iconic and legendary late-night sketch comedy show Saturday Night Live, celebrated its 40 year anniversary last night. Featuring a variable who’s who of superstar guests, music icons and a slew of “SNL” cast members both past and present, the show also featured a special musical performance from Kanye West.

Despite being Fashion Week, NBA All-Star, and SNL40 in New York this weekend, Kanye has made damn sure that all talk is centered around him, from his adidas show release, to surprise appearances at local rap shows, clearly Yeezy Season is in full-effect.

Starting his three song medley by lying on the floor and wearing white contacts, Ye’ dropped the first verse  from “Jesus Walks” before shifting into his North West tribute “Only One,” then closing off the set with his new, new song “Wolves” featuring singer Sia and rapper Vic Mensa.

Watch it all unfold below.