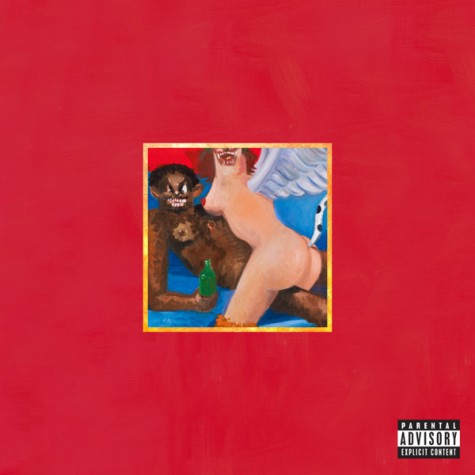 It appears that it was a weekend of album art debuts, with Kid Cudi revealing the artwork for his Man on the Moon II: The Legend of Mr. Rager on Saturday via Facebook, and Kanye’s My Dark Twisted Fantasy on Sunday via Twitter. The Kanye cover art has once  been created by artist George Condo, who has done the “official” art work for the two singles off of the album. In Kanye’s intial revelatory tweet he let it be know that the cover has been banned in the USA, “Banned in the USA!!! They tried to play me fam! They don’t want me chilling on the couch with my phoenix!”. It is a pretty safe bet that we will receive an alternative cover.  Kanye went on to “say”, “In all honesty … I really don’t be thinking about Wal-Mart when I make my music or album covers #Kanyeshrug!” he said. “I wanna sell albums but not at the expense of my true creativity.” Seems fair enough to me!

In West’s little twitter rant he also let more album details slip,  “Last day to wrap the album… I’m feeling so blessed on this day… finishing my 5th studio album in 6 years! Lining up piano sample replays,” he wrote. “Adding the voice samples from the VMA performance to the album version of ‘Runaway’ also the whole song is 8 minutes long.”  Awesome!