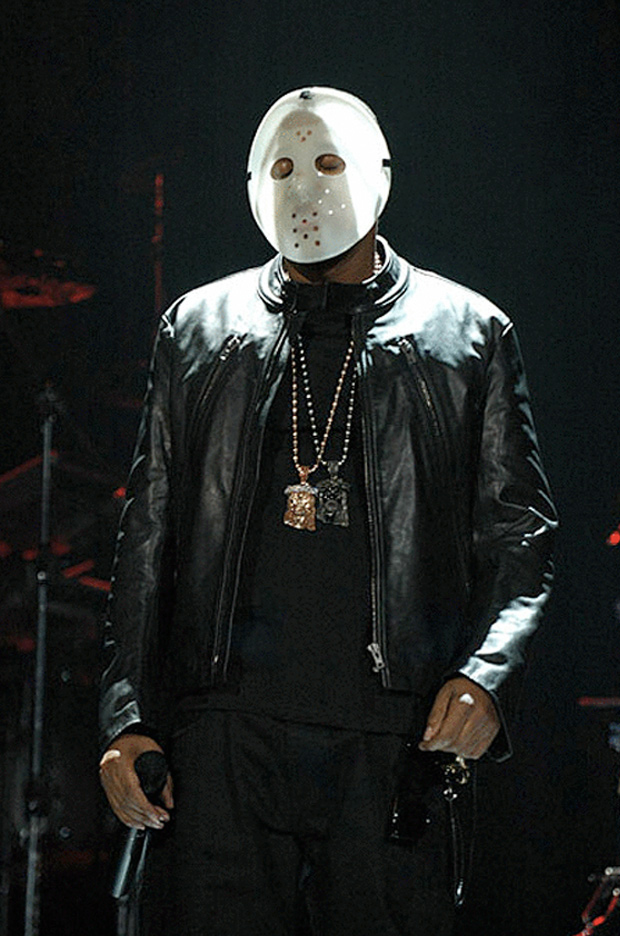 The Jay-Z concert on Saturday night was insane! When it was all over I had to pick the pieces of my mind off the floor, and wall behind me, because it had been blown away. It must have taken me five minutes to collect myself. But first, lets explain how we got there…

… Many months ago when it was announced that Jay Z was going on tour to support the release of latest opus the Blueprint 3 I swore with great emphasis that I would be at that show. However, being somewhat of an old dog at this, concert going that is, I knew the best, general admission seats would be virtually unobtainable, and I would either have to settle for mediocre tickets at an astronomical, extortionist price, or a take the nosebleeds at premium price. You can probably already tell that I wasn’t pleased with either outcome, but I had sworn an oath, in front of witnesses that I was going to this show so I had little choice. I decided to break from convention and my usual gut instinct and wait. I waited and watched the “good” tickets get snapped up, followed by the somewhat decent seats, and slowly but surely all the tickets disappeared. What was I thinking? You might ask, well I was watching the bidding war being waged on Craigslist, and this my friends is where the really scandalous side of concert goings happens. Tickets for general admission that were not even on sale to the public, but are given away were being sold for up to $500 a ticket. Seats that were not even so great to begin with, that originally sold for $100 were now being sold for up to $200 a piece. Even crappy, super far away from the stage nose bleed seats were going for unreasonably high prices. I was both shocked and appalled, but still I waited. I knew that if I held out until the day of all the show, something would surface.

Well my patience was rewarded when not but two hours before the show was scheduled to begin did the answer to my problem emerge. Some unfortunate soul had been suffering through the flu, and was unable to go, and wanted to get rid of his ticket so that he at least came out of the venture without completely losing his money. He offered to sell his reasonable and decent ticket to me for $20 less than what he paid if I could meet up with his friends who had the extra ticket with them, in the next hour. I agreed. En route to the rendezvous the unfortunate fellow texted, asking if I knew anyone else who could use a ticket as another friend of his was also unable to attend. Same price, seats next to each other. I thought about it for a second and made a phone call. Within twenty-five minutes I had two tickets to see Jay Z, I had met up with my buddy and we were heading inside to take our seats.

We had arrived just in time to catch the last two songs from up-and-comer J. Cole, who had been tapped by Jay Z as his protege. He wasn’t bad. Although I  haven’t heard any of his music and wasn’t able to get fully immersed in it, from what I did hear, I can certainly tell he has potential. Next up was Wale, and I was eager to see him. I have been thoroughly enjoying his two mixtapes, The Mixtape About Nothing and Back to the Feature, for the last couple of months and have been rather vocal in my tuting of his talents. Needless to say I wanted to see if his live performance held up to expectation and he did not disappoint! Wale controlled the stage and even took his seemingly endless supply of energy into the crowd, several times. Rocking several tracks from his November 10th debut album ATTENTION DEFICIT, I really got a taste of what he had to offer, and at one point he even rapped over a Justice and Nirvana mash up flawlessly.  He was really good!

Then came Pharrell Williams and N.E.R.D. and boy can they move the crowd. The energy was off the scale, the whole stage was bouncing. The audience was rocking out like crazy, and man, can Mr. Williams ever make the ladies drop it like it’s hot! I was happy I had come early.

Then the main event! Rising slowly out of the middle of the stage floor, wearing the white Jason Voorhees mask from Friday the 13th in celebration of the Halloween show, was Mr. J to the Z. From that moment on the madness ensued. The show was incredible, people were singing along word for word to every single song.  I was so caught up in the moment I didn’t bother to even try and take pictures, which I’m sure you know is a first for me. It was an amazing sight, an entire stadium of 16,000 fans bouncing, singing and high-fiving each other.  It’s no wonder Jay Z couldn’t stop smiling. That type of adoration must be extremely addictive.

The show was phenomenal, continuously accompanied musically on stage by a live band and his ever-present former protege Memphis Bleek, Jay worked his way through his vast and extensive collection of hits. In fact he played two tracks off the new Blue Print 3 album and then proceeded to perform over an hour of older material before returning to the newer songs. It was at this point that Pharrell Williams returned to the stage to lend his vocal talents to “So Ambitious,” a song which he is both produced and is featured on.  This got me thinking about who else might show up on stage to help perform tracks off the new album with Jay, I mean there is one featuring Toronto’s own Drake after all.

Well, my suspicion was quickly sated when Jay Z handed over his microphone to Drake, allowing him to perform his own single “Successful”. It was an interesting touch, rarely do people allow others to perform unassociated songs during their concerts. The audience went nuts, and just about lost their minds.

By the end of the show, during the encore Jay Z started up a song letting the audience sing along and get into the groove before switching to another instantly recognizable classic track, over and over again. At one point he laughed and stated “I can do this all night, I got a million of these!” and it wasn’t until he got to the classic 1999 track “Big Pimpin’ that he stopped switching up the tracks, and instead after about 30 seconds of the melody he stopped the beat and said “you can’t treat Big Pimpin’ like that,” he paused, and continued “It’s a cultural phenomenon, every one knows where they were when they first heard ‘Big Pimpin!”’ At which point people once again lost their proverbial shit and went nuts, swinging their jackets, sweaters and shirts in the air “like a helicopter”, creating a rather pleasantly cool breeze.  I once again high-fived the guy in front of me as we both got into the groove and bounced along with the song.

Overall the Halloween Jay Z concert was amazing, if possible it was better than the last time I saw him accompanied by Mary J Blige. The energy and excitement was more tangible and the people were a lot more into it. I don’t know if the difference in energy was caused by anything in particular, but I am going to venture to guess that it’s because the album being toured, The Blueprint 3 is a lot more user-friendly than his previous movie themed album American Gangsta. Either way the show was incredible, and was hands down one of the best I have seen in a very long time. And despite it being in a stadium setting, I am very happy I was able to wrangle the tickets I did.