There may be a pandemic still going on, but Samsung has something to satiate your luxury urges, and it comes in the form of the Galaxy Z Fold2.

If this concept seems familiar to you, it’s because it’s the company’s second attempt (well, third if you count the aborted first attempt in 2019) at making a foldable phone that can turn heads. And it starts at $2,780. 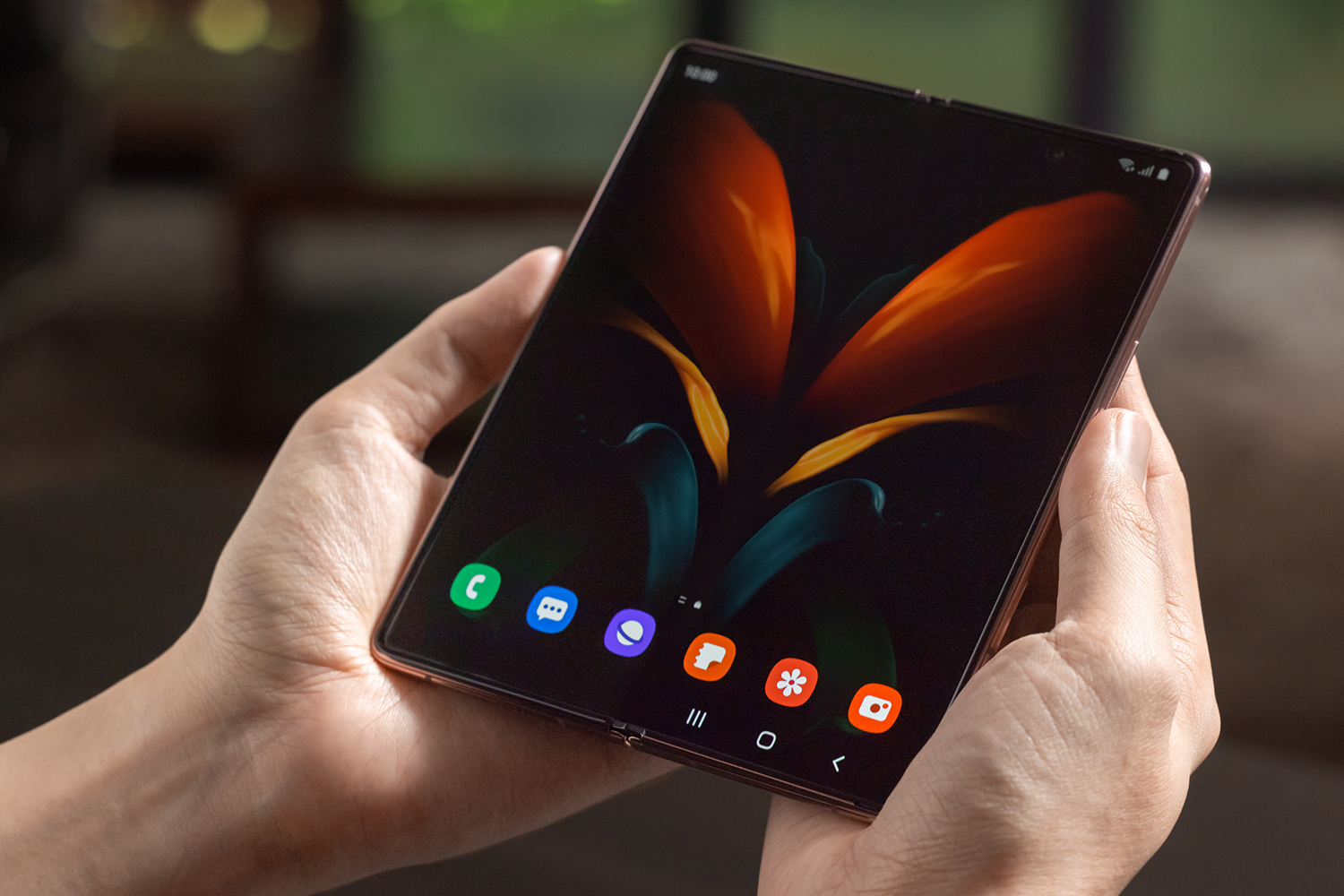 So, what makes this one different from the one Samsung just launched back in December 2019? For starters, it’s a smarter, more refined design. Right off the bat, the most obvious change is the front screen when the device is folded. The previous one had a 4.6-inch screen that was underwhelming, whereas it’s now a 6.2-inch full-screen display that looks much better. It has a front-facing camera and the speaker you would use to make a call to your ear. 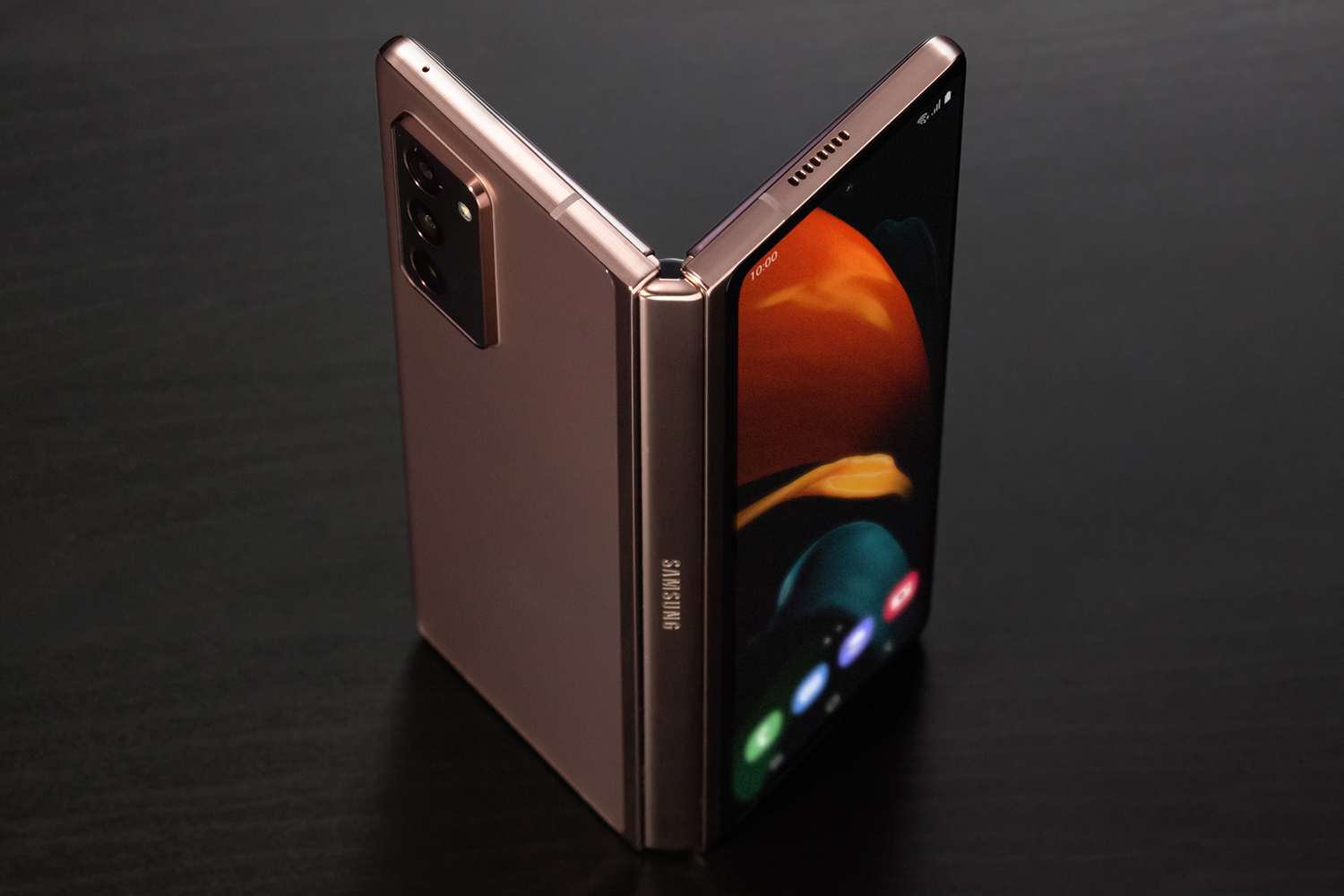 Fold the phone out and you get a 7.6-inch tablet-style Dynamic AMOLED that also gets an upgrade. Here, too, you get a front-facing camera that’s just a small hole at the top, including smaller bezels for a more uniform layout. Some of what’s here carried over from Samsung’s other flagships, namely the Galaxy S20 Ultra. The 120Hz refresh rate is worth using because of how much smoother it makes the phone’s software feel. If you have an S20 Ultra and you haven’t used it yet, give it a shot.

That hardened plastic from the first Fold is gone and in its place? Samsung’s Ultra-Thin Glass. The company confirmed this is real, actual glass, and it can bend many times over. When you do bend it, you can also prop it up, kind of like a makeup case. That splits the screen in two, so you can watch a video on the top half, and control it on the bottom. Or shoot with the camera on the top and see the shot you just took appear on the bottom. 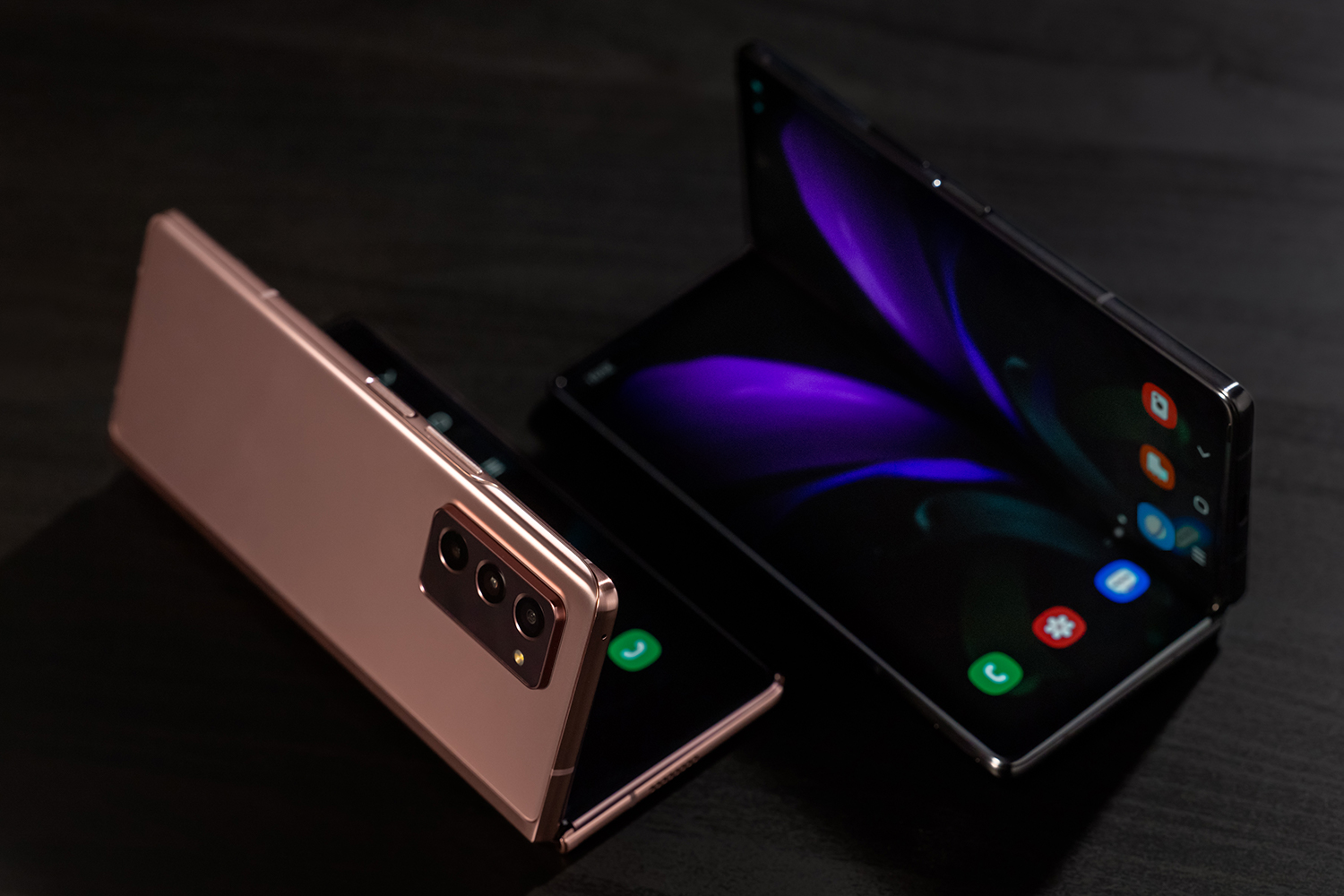 Samsung calls that Flex mode, and while it’s a great way to use the phone, not all apps support the feature. For instance, if you’re watching YouTube, you’ll get the split-screen effect. If it’s Netflix or another streaming video app, it will just split the whole scene in two. So far, the only apps that work with it are Samsung’s apps, Google’s apps, Microsoft Office and Spotify. More are apparently coming, but you’ll have to wait for their arrival.

You couldn’t do Flex mode with the first Fold, and one of the reasons why it works here is because of the Hideaway Hinge. Not only is it stronger, but it also has this neat mechanism inside that uses vacuum bristles to sweep away any debris that might get caught inside. Not a bad way to stay clean.

You can still multitask by having up to three apps open at once on the big main screen. And single apps can make good use of the extra real estate, like Google Maps, Yelp, Instagram, TikTok, and pretty much any photo-editing app. It’s times like that where the Galaxy Z Fold2 will probably feel more like a tablet than a phone. 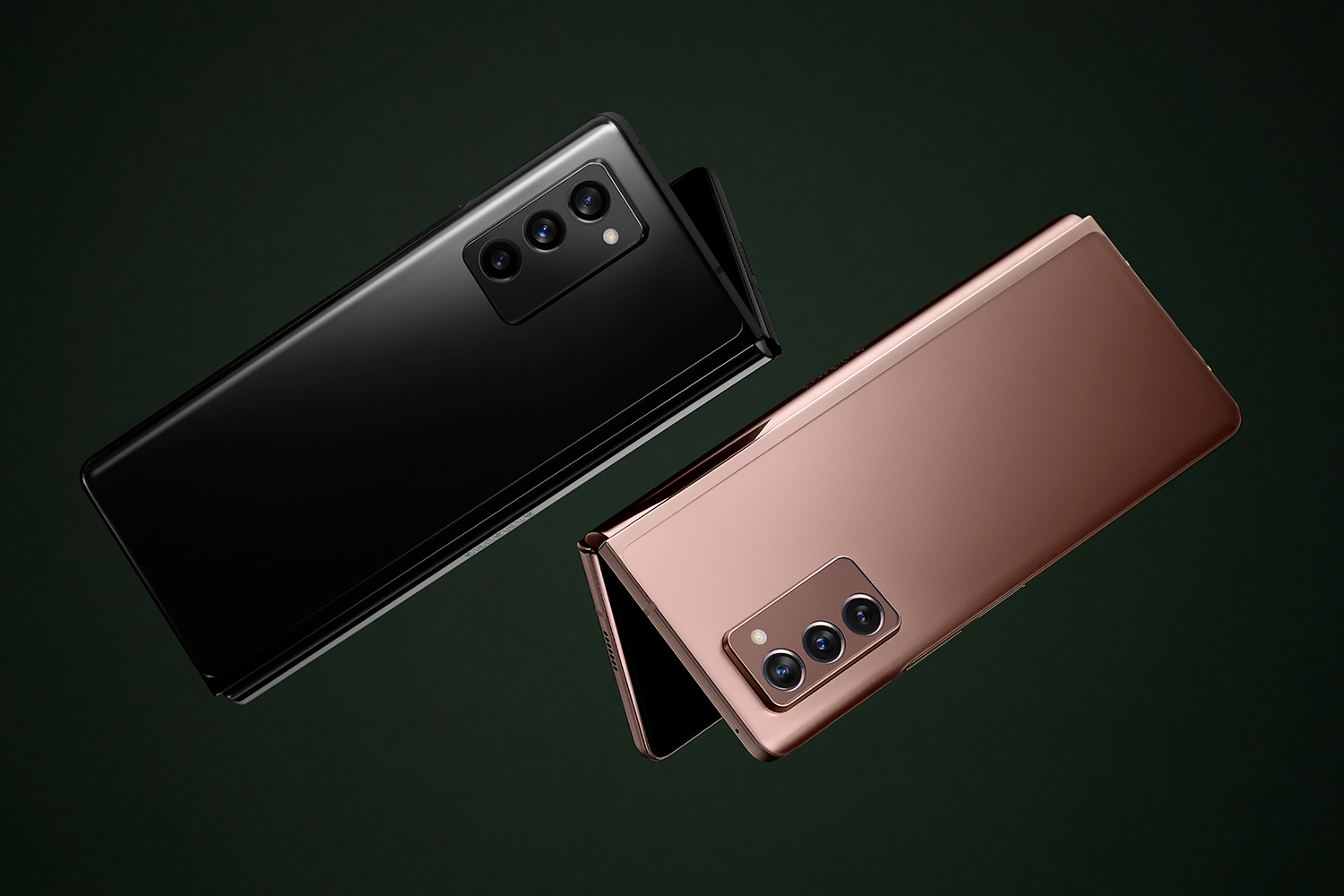 The camera array on the rear looks a lot like the Galaxy Note20 Ultra, except the specs aren’t the same. You get 12-megapixel wide, ultra-wide and telephoto lenses to shoot with, including all the latest camera software, features Samsung currently has. Things like Single Take, Night Mode, Live Focus and 4K video capture.

Because this phone folds, it can also change how you shoot. We mentioned Flex mode earlier, but there’s this cool way to take pics when you open up the Fold2. Point it at someone and they can see themselves in the exposed front screen. Turn it around for a selfie from the rear cameras, and you see yourself in that same screen for better framing.

Getting your hands on the Galaxy Z Fold2 starts today with pre-orders through Samsung Experience Stores or Samsung.ca. It hits retail officially on September 18, and Bell will also be carrying the phone. It’s just not clear yet which of Bell’s retail locations will have it on hand for people to actually see in person. If you have a SIM card from another carrier, not to worry, the Fold2 works with every carrier in Canada. It also supports 5G, so you’re covered whenever that network goes live to replace LTE as the fastest available. 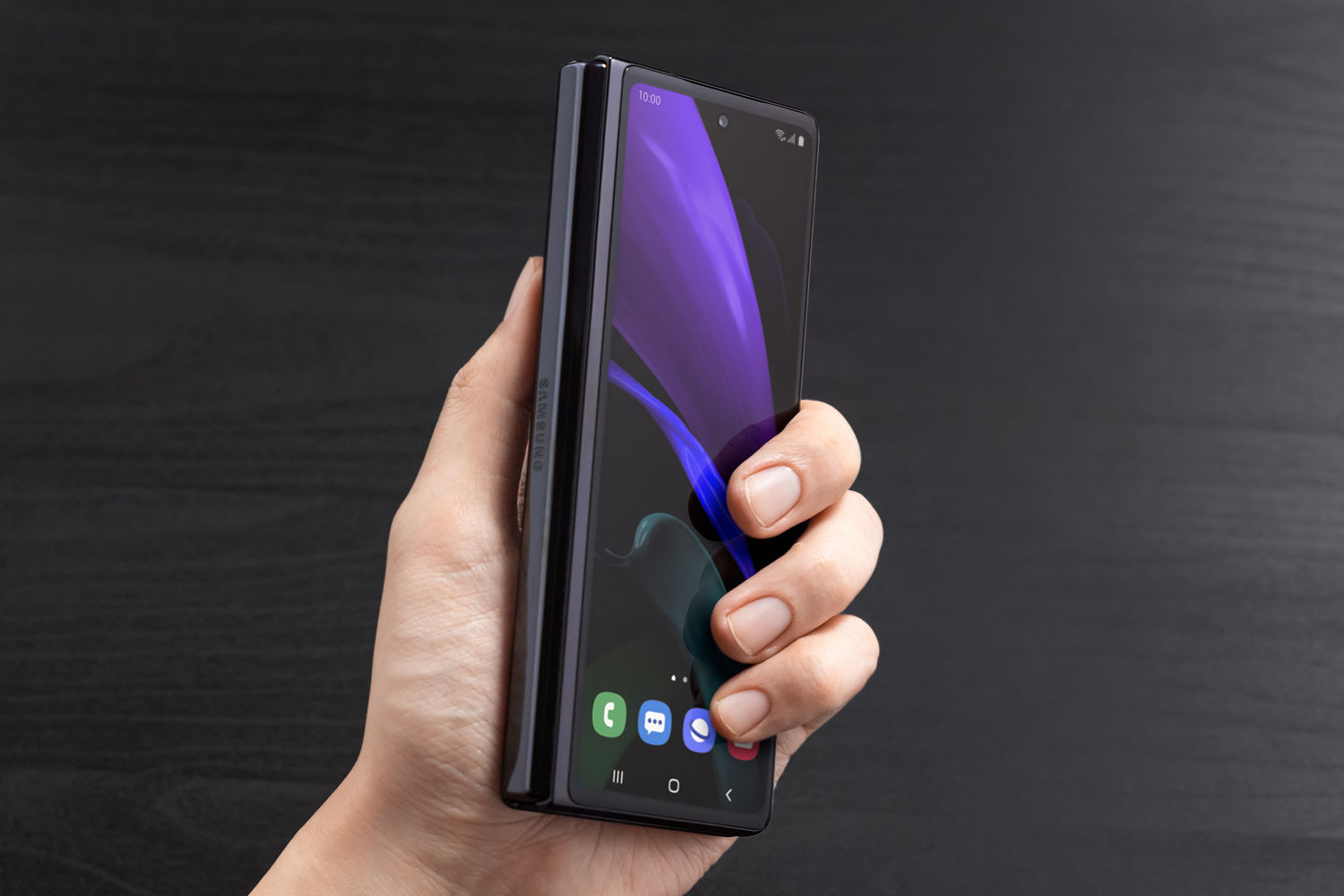 You get two colour options: mystic black and mystic bronze. Then there’s the hinge. Samsung is letting anyone who orders the device from the website to customize the hinge by choosing between metallic silver, metallic gold, metallic red and metallic blue. You can combine any one of those with either the black or bronze model. Bear in mind that this is a permanent thing — you don’t get to switch hinges after. And that order comes shipped to you straight from the factory overseas, as it’s not something you can order or get from a store.

We should also note that the Thom Browne edition of the Fold2 won’t be available in Canada.

But the Galaxy Z Premier Service will be, and that comes with 24/7 customer service and a screen replacement within the first year after purchase. Oh, and if $2,780 is too rich for your blood in one shot, you can do a zero-interest payment plan to pay it off over 24 months.