Samantha Franz is a 29-year-old designer out of Los Angeles, whose fashion label, By Samii Ryan, ended 2020 with $4 million in sales. $1.4 million of the sales came directly from the online e-commerce store.

The apparel brand saw a surge in sales right as the pandemic hit in March 2020. In the same month, the By Samii Ryan (BSR) sweatpants went viral, with the tie-dye sweatpants and hoodies being worn by artists such as Halsey, and up-and-coming TikTok stars.

Every Friday at 9:00 AM, they would offer select sets and pants, too.

“Our releases were such a thrill during that time because we sold out of all our sweatpants in under 10 minutes,” Franz told Sidewalk Hustle.

By Samii Ryan, which Franz created in 2009 after she graduated high school, is rooted in nostalgia. Franz said she gets the inspiration from looking back on brands and pop culture moments from the ‘90s and ‘00s. She incorporates these moments into pieces for BSR, designing with a “modern take on those nostalgic memories,” Franz said.

Franz said she always enjoyed customizing accessories to clothing, whether dyeing it, adding studs or spikes, or combining two garments into one piece.

In 2009, she started an Etsy shop to house her handmade products which she was also selling at music festivals across the U.S. In 2011, her accessories were donned by artists like Ke$ha, who Franz said helped to kick orders into high gear. 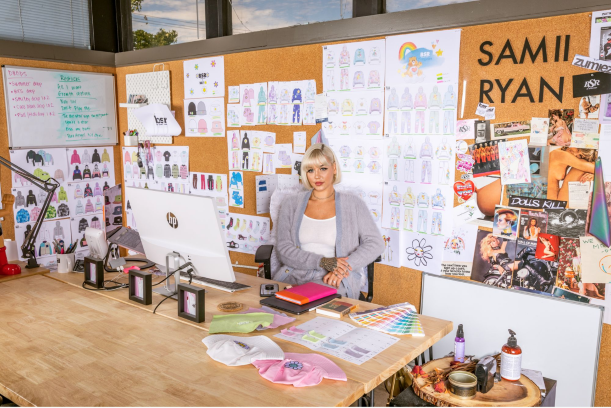 “One time, Ke$ha shouted us out on Ryan Seacrest’s show, and I had to make 500 plus accessory pieces by myself to ship out all the orders from the amount of volume she brought to my webstore,” Franz said.

The apparel line officially launched in 2017. Retail outlet Zumiez was the first to pick up the brand’s graphic tees and hoodies. Cut to six months later, the pieces sold in over 650 of Zumiez’s stores across the U.S. The growth hasn’t stopped, Franz said. 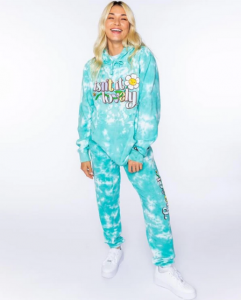 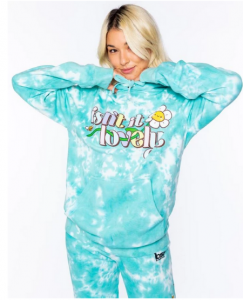 By Samii Ryan is a brand inspired by “unrequited love” and growing up as a youth in the ’90s, Franz said. She’s combined this feel with “trendy lifestyle silhouettes” and a “feminine streetwear twist.”

In 2020, the business pivoted to offer more loungewear and comfy pieces. Soon, BSR’s tie-dye sweat sets became top sellers, especially for the Gen Z audience. BSR offers items for teens as well as “50 year old moms that just want something cozy and cute to lounge around their houses in,” Franz said. “We try to offer something for every age group even through our nostalgic brand partnerships.”

Sizes range from XS to XXL. Franz said they are working to expand that size range.

Currently, the team consists of Franz, her fiancé, her sister, and one other employee.

To get the word out, Franz has turned to social media and brand partnerships.

“We have ongoing partnerships with Smiley Originals, Care Bears, and a yearly artist collaboration with Dessie Jackson, among other projects,” Franz said.

They also have a paid advertisement team which works on the brand’s ads for Facebook and Instagram. Through social media, BSR has been able to reach new clients and partners directly.

“Celebrities and Instagram influencers tend to reach out to us directly on Instagram,” Franz said, adding that she also reaches out to tastemakers and sends items their way to wear and post about.

The most popular item continues to be the sweatpants, Franz said, mentioning that they offer a custom fitted pant which is slightly oversized. And it fits unisex.

Franz said she is looking forward to working with two female artists, Dessie Jackson and Esther Kim in 2021.

“We’re also expanding into new categories this year and adding some more cut and sew pieces into the line, which is really exciting for us,” Franz said.