SH: Were those all for CMJ or part of a tour?
KM: All for CMJ. This is our first headlining, special, for real, just us show.

SH: Do you feel different about it?
KM: Yeaaaah, we feel more special. *Laughs*
LB: You know, it’s not like a million bands!
KM: People are coming to see us and we’re gonna play for a longer time, we get a soundcheck, we get treated nicer.

SH: Soundcheck is a luxury at CMJ. They’re just like “Get on there!”
KM: Oh my god, soundcheck is so good. Without the soundcheck you can’t hear yourself. It’s good for the musicians to get a soundcheck. It’s niiiice. It’s a good luxury. Also, as I said to some people today, we started this tour at CMJ last month and we’ve been on the road since. It’s been a month of playing shows in cities that I’ve never been to. A lot of unfamiliar places. Coming back to New York, this time, when we rolled in I was overwhelmed with this feeling of “I’m home!”

SH: Some people say Toronto and NYC are similar. Do you feel like that?
Dilly Dally: (shouts) No!

SH: Wow…
LB: We’re more chill.
KM: If I had never lived in either city, then yeah. But because we’ve lived in Toronto for a long time, it’s very poignant.
LB: Maybe it’s more chill to me because it’s home. We have weed.

SH: We have some places in the U.S. like that.
LB: I know. I was there. I went there. I did it. Denver was special. Denver was great. 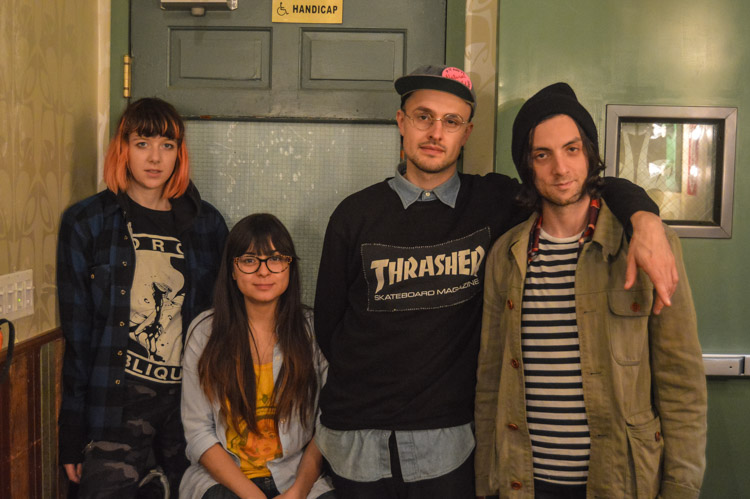 SH: Congratulations on the debut album. It’s really good! Our favorite song is probably “The Touch.” A lot of the comments about Sore is that it’s geared towards youth. Do you think that’s true or fair?
LB: There’s actually been a lot of old people at our shows, surprisingly. Mainly older dudes that listen to 90s guitar music and they’re like “Uhhhhhh cooooool!” But I don’t think it’s geared specifically towards youth.

SH: A lot of Nirvana and Stevie Nicks comparisons. We thought it was unfair that it was labeled as a youth-centric album.
KM: There’s a lot of different songs on the record. Some of them were written when I was 18. But then “The Touch” was written 8 months ago. I’m 26 now. So it’s written over a really long period of time. At the same time too, you channel different stuff depending on how you feel that day. I think maybe what people find youthful about it is how instinctual it is. How emotional it is, too. It lacks a lot of pretention. It’s not very complex. The songs aren’t ridiculously hard to play.
LB: Katie’s not like (deepens voice) singing like this. She’s like (screams) “Waaaaaah!” So maybe that seems youthful.

SH: We think it’s more relatable. People can easily approach it and dig into it more. We’re pop fans and sometimes you can feel like an outsider.
KM: That’s so special! That’s so awesome. It makes me so happy because a lot of the music we listen to is our friends’ bands in Toronto that’s not very accessible. I think what we tried to do with this record is take that energy and the essence of that and channel it into songs that are structured in a pop kind of way. We love pop music too! We love karaoke. It’s another huge influence on our music.

SH: It’s funny that the three top pop artists in the U.S. are Canadian. Justin Bieber, The Weeknd, and Drake. Is there a recipe Canadians are following? Why is the world so into Canadians?
LB: Canadians are awesome.

SH. It could be that.
KM: I think as well Canada is still finding itself culturally. We kind of feed off of American culture a lot but there’s also tons of people who emigrated from different places around the world. It’s a weird melting pot. Also people in Canada aren’t very patriotic in the same way that they are in America or in Europe. Certainly, for me, my parents emigrated from Ireland and I never quite felt like I was a “real” Canadian. Culturally, I think it’s still finding its voice. It’s really interesting and beautiful. 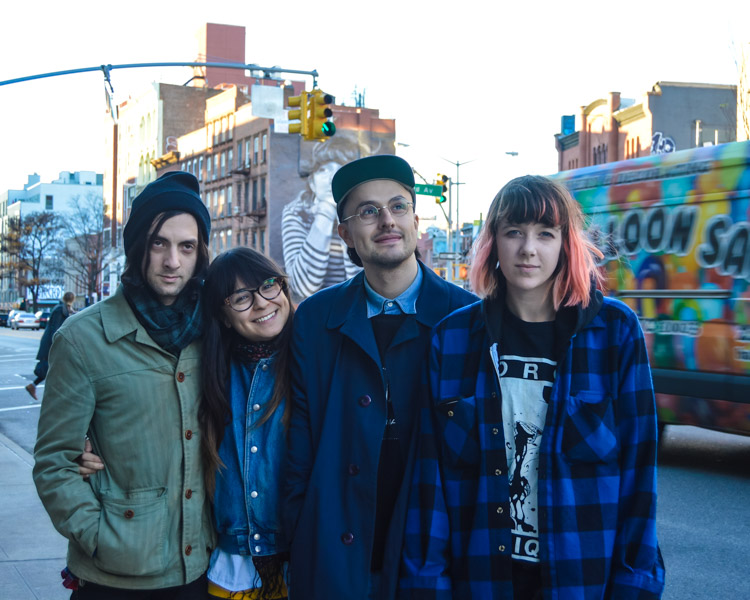 SH: What record are you listening to at the moment?
Benjamin Reinhartz: We were listening to the new Protomartyr record in the car a lot. It’s really good! We saw them at CMJ at Santos Party House. They were awesome. I love that band.
JT: Buffy Sainte-Marie. The new album is pretty awesome.
KM: I just got super stoked on Spooky Black. It took me a while. Not that I didn’t like Spooky Black at first! I guess I was just super stoned every time someone would show him to me. Or drunk on YouTube binges with my friends. It took a few tries until I really broke the ice with his music. So stoked! It’s really therapeutic for me.

SH: What’s your favorite place to shop in Toronto?
KM: Chosen Vintage is an awesome place to go. Black Market is sick. $10 t-shirts. It’s where I got a lot of the t-shirts I wear on stage.
LB: My favorite articles of clothing are hand me downs from friends and shit I find. Not off the street but you know.
KM: Walmart.
LB: Don’t say Walmart, please.
BR: Frank & Oak have quality clothes at affordable prices.

SH: Nice plug!
KM: I got these pants from Walmart! I think they were supposed to be long johns.
LB: They were.

SH: Dual purpose pants. Wrapping up, what’s the last thing you read that you really liked?
JT: I’m reading a book called Shōgun. It’s really good. It’s a historical fiction set in Japan in the 1600s. About the Dutch training ship that crashes there. It’s a big tome. I’m almost done.
LB: He reads really fast.
KM: I read my newsfeed on Facebook.

Check out our review and photos of the show last weekend.