We just got back from the very first House of Vans in Calgary, Alberta and we are still trying to digest all of the culture that we were exposed to over the weekend. The three days of festivities marked House of Vans’ debut takeover in Calgary following years of Vans building with the local skate and art communities. Located entirely in the city’s new Big Four Building (home to the Calgary Stampede), the event acted as a hub for any and all people interested in the worlds of skateboarding, art, sneakers, music, fashion and more. We have made things convenient for you and compiled our ten favourite things that we saw at House of Vans Calgary 2018.

It would be a huge disservice to not begin this roundup with the giant skatepark built specifically for House of Vans Calgary. Each day featured several free-skate sessions in addition to beginner skate clinics, lessons with 100% Girls Skate Club, a BMX-only free-ride session and a “Best Trick” competition that concluded the festivities. The most notable component of the skatepark was a scaled-down version of the Calgary Scotiabank Saddledome that was the perfect size for a variety of tricks.

While the skatepark took up nearly half of the House of Vans space, the pop-up Community Market took up just about the other half. The shopping experience was curated by Calgary’s own Angel Guerra of Market Collective, a pop-up market series that features a variety of local artisan vendors. Each vendor was tasked with populating a booth with their merchandise and identity in whichever fashion they saw fit. There was plenty of variety from one end of the market to the other including local fashion brands, artists, jewellery makers, tattoo artists, curated vintage shops, coffee shops, and even a Volkswagen bus converted into a makeshift vinyl and cassette store. “We’ve always been the sole owners of Market Collective – making all the decisions, curating all the events – so collaborating with Vans has created a lot of growth on both sides,” said Guerra. “Working with people who do events so well has been great for getting inspiration.”

The first night of House of Vans Calgary played host to a showcase concert of five Calgary bands – each with their own unique style and stage presence. The community support was extremely strong as Monolith AB, Port Juvee, Crystal Eyes, Feel Alright and Melted Mirror delivered dynamic sets ranging from post-punk to heavy doom metal. The frontman of Monolith AB noted that the “locals only” nature of the lineup was “huge for Calgary” and the roaring crowd response certainly indicated an agreement. The show was part of a larger Vans contest called “Share the Stage” that put each band in the running to win an opening slot for a headlining act at a future House of Vans event.

While it was not an official “exhibit” per say, there was a really quirky ring toss game that attracted a lengthy line of prospective winners during all hours of the weekend. Participants just had to ring one of the classic Vans silhouettes and they won a pair of that silhouette in their size. This component of the festivities was notable because the length of line to play the game did not shrink all weekend – people were consistently lined up to toss rings at the Vans longer than at any food truck or vendor. Quirky and hilarious!

Our favourite art installation of the weekend was Five Art and Merchandise’s ‘Cruel Jokes’ group show. Curated by 5AM’s founder Julia Kansas, the open-concept exhibit featured work from a number of Calgary artists including Daniel Beanmash, Jane Trash, Tommi Watts, Geneva Haley, Sasha Foster and more. Inspired by the grind of skateboarding and the wide variety of arts and subcultures within it, Kansas sought out to curate an exhibit that brought whimsy back to some more serious topics like mental health, feminism and equality. “Skateboarders aren’t all necessary artists but they’re all relatively creative people,” said Kansas. “Skateboarder mentality is something I’ve always been attracted to – I can relate to the goofy, lighthearted energy and at the same time the grind and hard work it takes.”

The second day began nice and early with a ‘vision walk’ around the city led by Canadian skateboarding photographer Jeff Thorburn. The small group of photographers met in the morning at the Big Four Building and listened to Thorburn talk about his introduction to skateboarding and photography. After some words of encouragement and an outline of the plan, the group hit the streets of Calgary and spent two hours capturing the architecture, people, culture, skaters and the general buzz of the city. The walk concluded with each photographer submitting their best shots and having them featured in a gallery on the final day. Thorburn chose a winner from the range of entrants and the lucky photographer went home with a brand new Leica camera!

Following the all-Calgary showcase that took place the first night, attendees returned to the main stage after day two for headlining performances from two visiting bands. Philadelphia punk rockers Sheer Mag kicked off the night with an explosive performance that instantly won over the crowd. Lead singer Tina Halladay seemed to personally connect with everyone in the front row as she laid out her powerful, wrenching vocals over an hour of sweaty, upbeat punk.

Following a quick stage change, Brooklyn rock outfit DIIV took the stage to a roaring audience. Lead singer Zachary Cole Smith addressed the crowd by letting them know he had “met Mac DeMarco once” and then smoothly transitioned into “(Druun),” the intro track from their debut project, Oshin. The set that followed was a well put-together selection of material from their two projects that was only interrupted by more Mac DeMarco anecdotes from Cole or a short note about the appreciation they have for the fans who have continued to support them through a long hiatus from music and a break from touring. DIIV played a number of fan favourites including “Doused,” “Under the Sun” and “Valentine.” Even after an encore the energy felt by the audience evolved into a party that lasted hours past the show.

The Vans Customs program has always been an integral part of the brand’s identity and it was being exhibited in full-force at this House of Vans. Participants of all ages had the opportunity to test out their concepts (and scribbles) on sheets of white paper and then apply those ideas to actual all-white silhouettes. There was also a separate workshop that allowed participants to try out the online Vans Customs with the Vans team and order them right to their doorstep. According to a sign posted above the workshop, the Customs program began at Vans when the Van Doren family was being approached by customers with specific requests like materials they did not normally use to make their shoes. That energy continued for years and eventually evolved into the online system available now.

The story of 100% Skate Club is one of our favourite elements from the past weekend. Founded by Erica Jacobs in 2015, the club was originally intended as a way for Erica to find other women skateboarding in Calgary. She started a Facebook page, landed a small feature in the local Metro newspaper and was amazed to find a few others but when she showed up to the first meeting. “I didn’t start skateboarding until I was 20-years old and I didn’t know any girls in my hometown that skateboarded at that time,” said Jacobs. “But now I’m seeing girls starting at 6 and 7-years old – they’re going to be shredding it by 20!” The club now meets weekly and was one of the featured partners at House of Vans Calgary hosting all-girl skateboard clinic sessions. “I easily thought the club could have been a total bust but the complete opposite happened,” said Jacobs. “It really is the best feeling and it warms my heart more than I ever expected.” 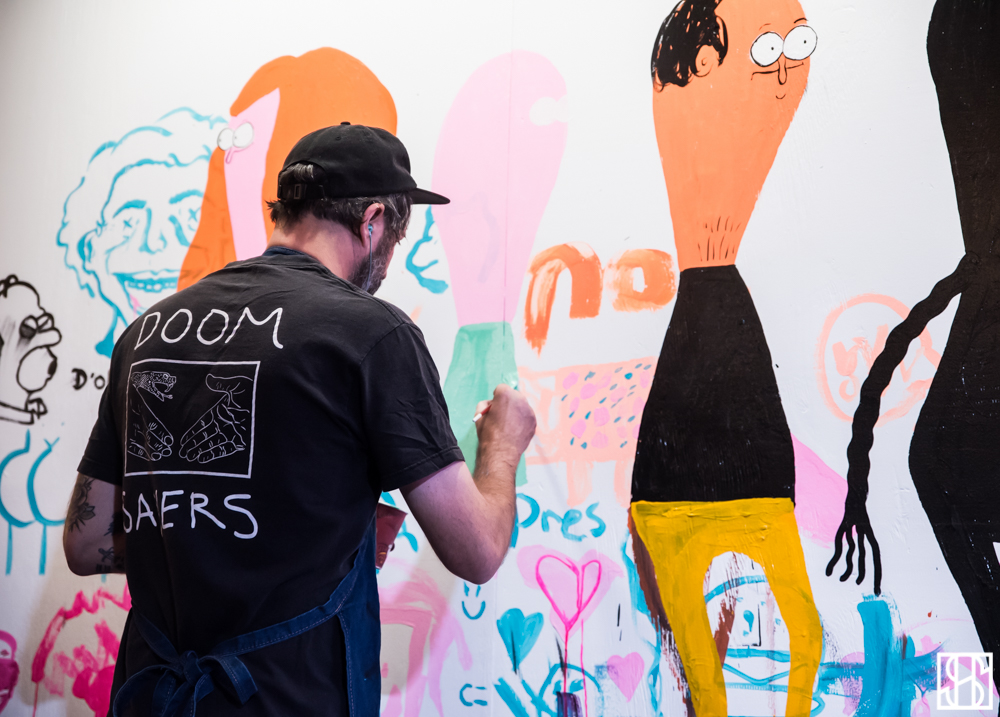 If you were wandering the space at House of Vans Calgary this weekend you may have passed the live mural painting by Jay Howell. The illustrator of Nickelodeon series Craig & Sanjay (and original character designer of Bob’s Burgers) invited children passing by to contribute to his mural and even sported a Calgary cowboy hat for the second day of painting. In addition to his mural, Howell was commissioned to create several unique Calgary characters in his style that appeared at in advertisements and on a photo backdrop at the entrance of the space.