Hennessy VS Partners with Felipe Pantone

It’s summertime and everywhere you look the temperature is at a sizzling point, which of course means Hennessy has announced their latest artist collaboration for their beloved artistry collection. For the ninth year in a row, the distinguish french cognac maker has handed over the reins of their Hennessy V.S. bottle to be reimagined and designed by a hot contemporary artist. Following in the footsteps of past artists collabs like KAWS, Futura, Shepard Fairey, JonOne, Vhils and more, comes contemporary artist Felipe Pantone.

The Buenos Aires-born Valencia native has made his mark on the art world by continuous moving and adapting his style. From street graffiti to typography, from digital art to optical art, Pantone is a world-renowned artistic pioneer. Utilizing distinctly mesmerizing colour, bold graphics, and 3D illusions, he continuously pushes forward while referencing the past. For his limited edition Hennessy V.S. bottle design he spent a large amount of time in the Hennessy archives exploring the brand’s rich history before setting forth to create his own unique interpretation.

We sat down with the artist to discuss his collaboration, process, why he doesn’t like showing his face, and more. 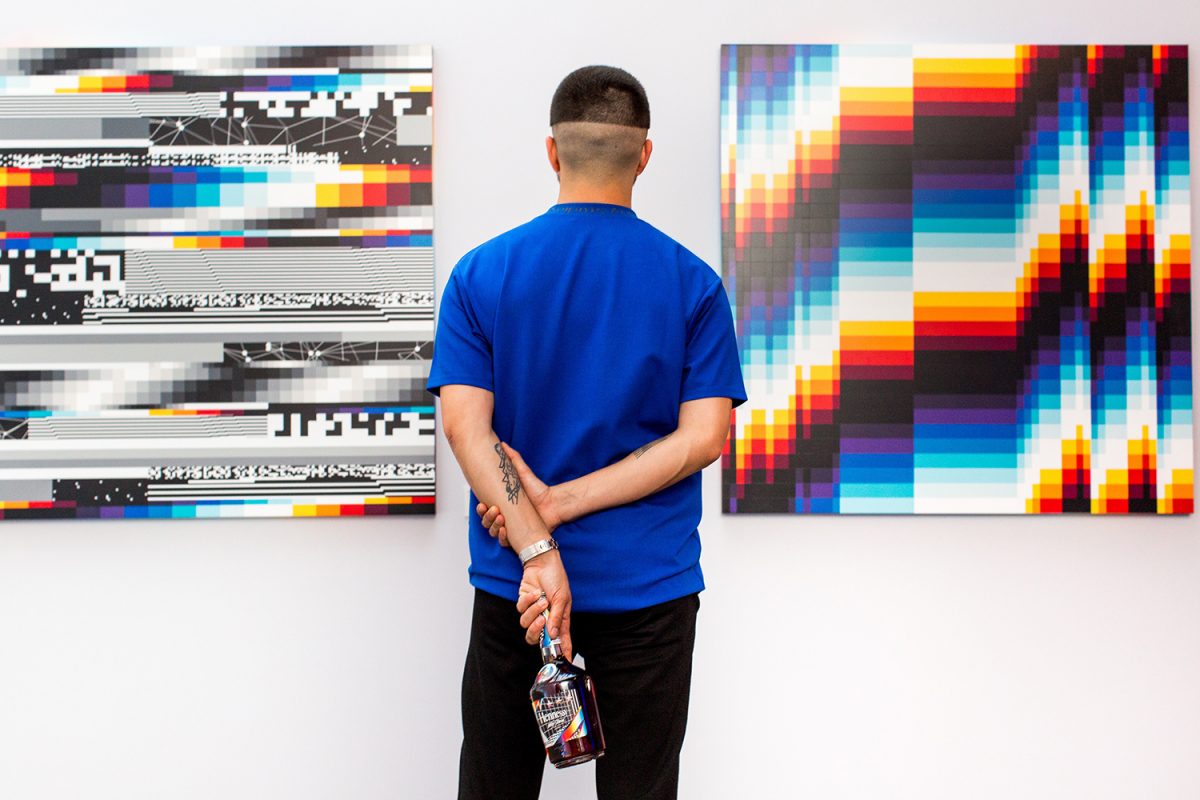 Sidewalk Hustle: First question, in all your press images and social media you keep your face hidden, why is that?

Felipe Pantone: I just think that it’s not very relevant. I put so much effort into everything visual that I create, from the work with Hennessy to a painting on the street or everyday designs. My face, I didn’t choose anything, it was given to me, I don’t think it’s very relevant, I care way more about this kind of stuff [points to Hennessy bottle], so when people Google my name I would rather them see that. It’s not that I want to be anonymous or anything, because I am always out, at my openings, I just want that to be first when you Google me. So far it’s working.

SH: Let’s talk about the art, W3-Dimensional and the 3 stars you did for the Hennessy bottle.

FP: Nice, so that, W3-Dimensional is a series of works that I am still working on, I just put some up recently, the title is about the dimensionality of the world-wide-web how everything got [dis]connected through the internet and I created one-piece thinking about many of the graphics I took going through the Hennessy archive, which was something really really cool. Our relationship, we met over a year ago, it’s crazy I’ve been working with them forever, although we just presented it now, but I went to Cognac and Paris many times, and we went through all the archives and the whole thing and with many of the elements I ended up creating one physical piece that was eventually translated to the bottle.

SH: Across all these pieces, is there a constant dialogue or message you want to convey or are they all different?

FP: My work generally, or at least what I care about researching or trying to reflect is dynamism and transformation, I think they are two huge themes nowadays. The way the world works and I think it’s something I constantly try to approach everything that I do. Basically what I am doing is trying to reflect the present times in that way. I am not trying to bring a message or… let’s say for example when my grandma sees my work she’s like “ooooh this is too much, I can’t even look at it,” but when a teenager sees it like “pewf, bitch there’s nothing.” When that happens that makes me happy, that means that I am being a good reflection of the present times. I am reflecting the speed of the present times and how people react to it. If my grandma looked at it and was like “pewf” I would be like “oh shit, I need more speed, more intensity.” I think it’s important for art and for me to be a good reflection of the times, and how the time affects me. So that’s for me very interesting to try to capture all those things, dynamism and transformation.

SH: Can you explain your relationship with colour? You work with a particular colour spectrum as well as black and white, why do you come back to it.

FP: This all came because of graffiti. When I was active doing graffiti, all you want to do is write your name as many times as possible, as big as possible, competitive with any other graffiti writers you don’t care about anybody else, like people passing by, all you care about is fellow graffiti writers. You want to be better, bigger, paint in more cities, all of that. I think it was a response to how do I, even if someone paints next to me, how do I make my piece louder, so I basically increased the contrast and the saturation so I ended up painting this black and white and crazy vivid colours next to everyone and my pieces were always louder. You would see everything and then it was like *hand exploding noise* “Yo look at me!” Louder than the ads, the banners, than everything. Eventually, that ended up being my discourse. There is this photographer and theorist Joan Fontcuberta that says we produce more images than we consume. How do you thrive and persist? I think this is a really good question. So that was my humble way of doing that in the graffiti world. What I’m trying to say is that is very contemporary, that very thought, I have an Instagram account, how do I make that visible. Like fashion and everything you want to make yourself visible and that happens in graffiti and translates to everything else and that was my humble way of doing it. So far it’s kind of working and it’s very present, very contemporary, to be loud.

FP: That’s something that made me really happy, they ended up agreeing to that. We live in a loud, busy, and distorted world that’s hard to keep up and that’s something very present in my work. Distortion, perception and all these things. The fact that they let me distort the logo is a big deal. A the beginning it was like “No!” but eventually they liked the design and there it is and I’m very happy about that. It reflects my work a lot, this is a real collaboration. When the brand actually lets you experiment and fuck with their tradition.

SH:  and it looks great! Thank you so much.

The limited-edition Felipe Pantone designed Hennessy V.S. bottle is available now in the United States and mid-August in Canada.