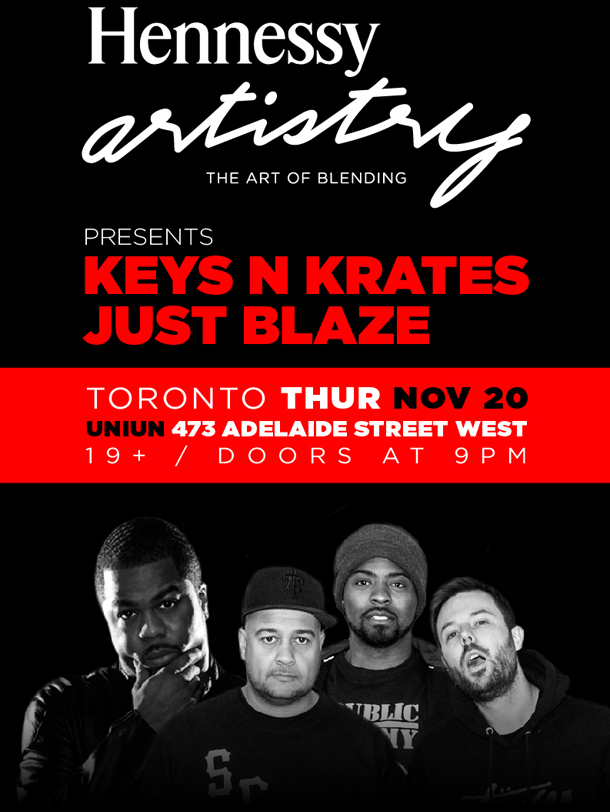 Toronto stand up! On November 20th the Hennessy Artistry Series returns to Toronto. This time around the series features the musical stylings of Toronto’s home-grown electronic band, Keys N Krates, alongside legendary hip-hop producer and DJ, Just Blaze. As always the Artistry Series features a fusion of dramatically different, yet complementary musical genres and world-class artists teaming up to throw one massive jam, celebrating the true ‘art of blending.’

Toronto’ own Keys N Krates makes this particular artistry series extra special, since they have skyrocketed to global acclaim over the last couple of years. Keys N Krates will blend and morph their set with that of Just Blaze; a force in the hip-hop scene, who has worked with all of the important hip hop artists, including Jay-Z, Kanye West and most recently, Baauer, infamous for his track “Harlem Shake.” Blaze’s style is unrestricted by genre and fuses live instrumental arrangements onto tracks layered with samples from hip hop to dance. It’s going to be bonkers!

The event will also offer partygoers a mix of sound, visual innovation and music, showing a unification of rhythm and taste, the joining of alternative urban cultures, and the versatility of Hennessy Very Special. Guests are invited to explore and experience the universe of the brand’s mixed drinks based on four flavours that mix perfectly with Hennessy cognac – berry, citrus, ginger and apple.

Sounds fun right? Well save the date: November 20, 2014 at Uniun Nightclub in Toronto, because you may just be partying with us.

Be sure to follow us on twitter next week for your chance to win four tickets to a VIP experience at the party.

Oh and if you don’t know, get familiar with Keys N Krates by watching the video below.