Formula 1 weekend hit Montreal for the first time since 2019 and after a rainy qualifying day – the sun came out for race Sunday. Let’s be honest, asphalt gleams and glitters in the wet, and the whole weekend did just that too.

We were not just trackside, thanks to Mercedes-Benz Canada we experienced the grandest of the Grand Prix. From a Hot Laps ride with the phenomenal, up-and-coming women of racing (full story on this to come), to qualifying day at the Mercedes Elite lounge and an evening at the official Red Carpet Kick-Off Gala with a very special guest, arriving in a very special ride.

And yes, of course – a roaring day at the Circuit Gilles-Villeneuve grounds for a pivotal half-season race.

Starting at the finish line, Sunday’s race gave us some true tire-to-tire trials in all sections of the race. Early season leader Charles LeClerc wasn’t giving anything up, this weekend or this season. Despite his grid penalty 19th place start, he flew through the pack early, making it to fight Esteban Ocon, quite literally wheel to wheel for the majority of the mid-race, finally breaking past the Alpine driver for a 5th place finish. The current leader and reigning World Champion, Red Bull‘s Max Verstappen continued his comfortable winning streak, topping the podium and building his break-away lead. This race, though, breaking away was made a lot less comfortable by LeClerc’s Ferrari teammate Carlos Sainz. After some bad luck this season, and being passed while pitting this race, Sainz didn’t let off the leader, finishing less than a second behind Verstappen for a better than the last few races in second place. Finally, our hosts with the most Mercedes-Benz saw a 4th place finish for George Russell, who has completed every race within the top 5, making him the only racer with points every race so far – a great start for him this season and in his first year with Mercedes-Benz team. But maybe most excitingly, the third-place podium, for our man of the weekend Sir Lewis Hamilton. 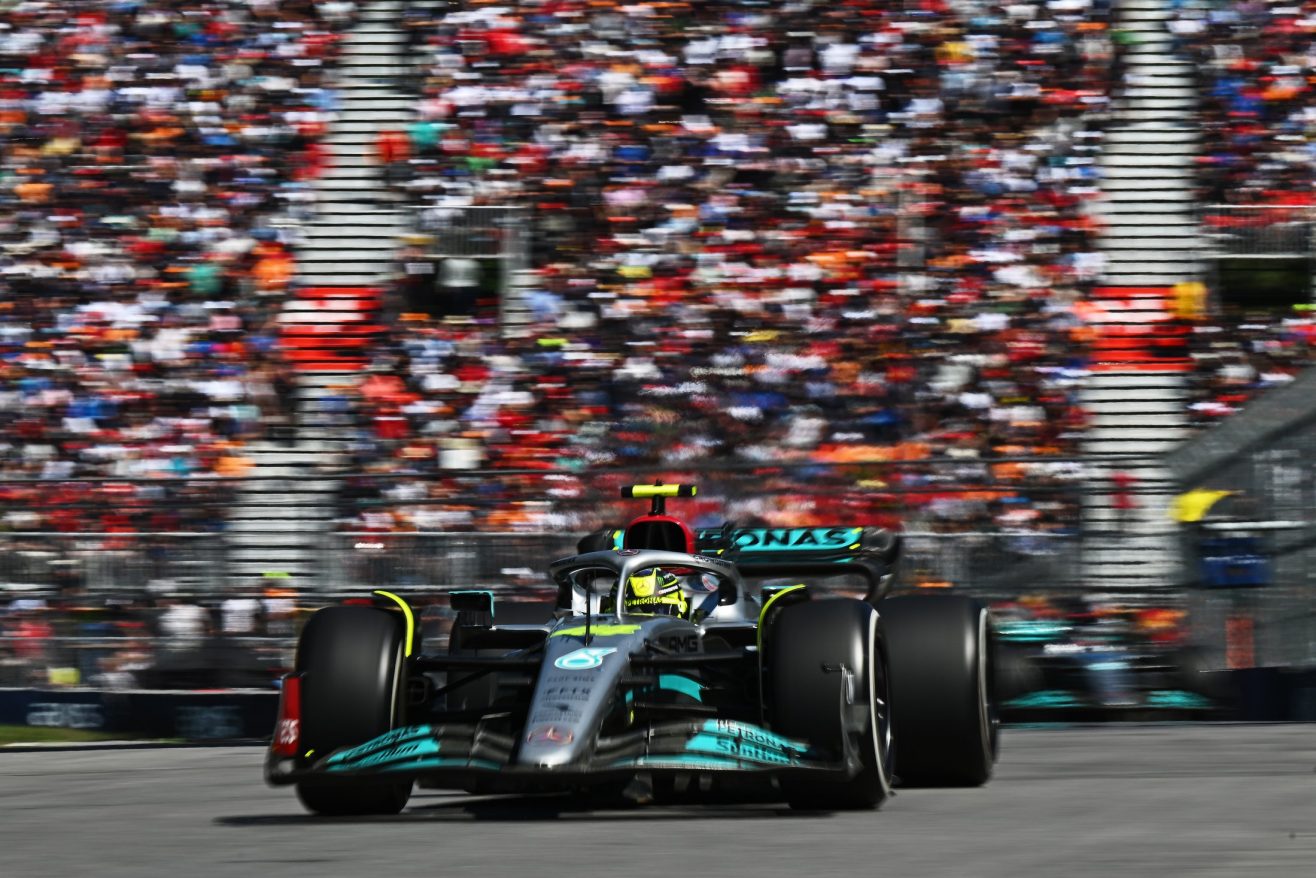 Remember, we mentioned the special gala guest, yes – that Sir Lewis Hamilton was it. He arrived at the Le Richmond red carpet in Griffintown the evening before in style in a 1955 300 SL Gullwing. He greeted the crowd warmly and gushed about how Montreal is one of his favourites “a little like a karting track” he said, and shouted out his team and performance coach Angela Cullen, before taking off with them to prepare for the race. It paid off!

For the rest of the night, guests enjoyed the evening at Le Richmond including dancing, stunning lobster and oyster platters, champagne and classic cocktails.

Besides this weekend though, we encouraged you to keep up so if you’ve been with us or not, we thought we’d bring you the highlights.

We’re bouncing in the best way after this weekend, and F1 is bouncing over the pond for the next race at Great Britain’s famous Silverstone track the first weekend of July.

Now that you’re up to date, watch with us in Canada on TSN in English, RDS in French and in the US on ESPN. You can also sign up directly for Formula1 TV on their website for all races including Saturday qualifiers by clicking here.