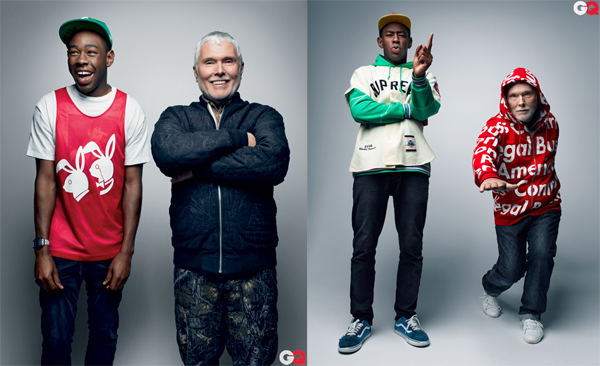 This is a neat little piece in GQ, rapper Tyler, the Creator and GQ’s Style Guy Glenn O’Brien discuss and swap stories about culture brand Supreme. It’s really rather fascinating and cool. Watch the video and read the first question from the piece below, then head over of to GQ to read the full interview.

GQ: How did you guys first become aware of Supreme?

GLENN O’BRIEN: Supreme is in my neighborhood in New York, so I’d walk by it all the time. I’d see 150 guys standing in line and figured out that’s when they’d have some kind of new sneaker or something in there. I didn’t want to be the old guy walking into Supreme, but then I was walking by one day and they were showing Glenn O’Brien’s TV Party from the ’80s on this big bank of TVs and I thought, Jeez, I guess I can go in there now. So I started going in there and buying shit, and I got to be friends with some of the guys who worked there, I got to know [founder] James Jebbia and the guys in the store.

TYLER, THE CREATOR: We would always skate around the area it’s at [in L.A.]. That was the only store in the area at the time that sold skateboards, so we’d go in there and buy boards, and I just gradually became friends with the guys who were working there. They would always just look out for us, me and my friends, when we were over there and out and about. They were like our big brothers over there and shit, they were older than us. I’m still cool with them to this day—I was over there yesterday. And over the last year, as I got bigger perhaps or whatever, I would always rap about it, and the guys at the L.A. store would always put a good word in for me with the dudes, the head guys, in New York. I eventually met Jebbia and Angelo [Baque] and all those guys, and we’ve been cool since. They respect me for doing what I do, and I respect them, cause that’s my favorite shit. It’s just cool I can be a part of this family and shit. They show me love, I show them love, they’re awesome, and I’ve always looked up to them.