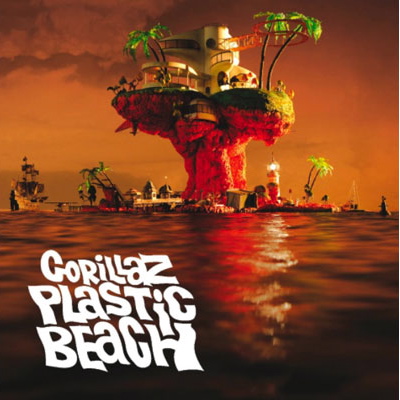 It has been five years since the release of Gorillaz last album Demon Days, and we were starting to get the feeling that, that may just be it for the cartoon-fronted band. Having to listen to “Feel Good Inc.”, and “Clint Eastwood” on infinite repeat, we were starting to become resigned to our fate, well flash-forward five years to a couple of days ago when the Coachella lineup was announced, with the surprising final day top spot of the mega-festival going to Gorillaz. Now it seems, out of nowhere Gorillaz are posed to take the world by storm, with word of a new album on the horizon. This latest offering is entitled Plastic Beach and is Gorillaz third full length album, and is slated for release on March 9th. In the meantime checkout the album art, the tracklisting, and satisfy yourself with this witty quip about the upcoming album.

“The band have taken up residence, recording on a secret floating island deep in the South Pacific, a Plastic Beach HQ, made up of the detritus, debris and washed up remnants of humanity. This Plastic Beach is the furthest point from any landmass on Earth; the most deserted spot on the planet.”