Get to the grid! Formula1 Ready for First Race 2022

With only hours to go before the 5 red lights countdown to start the 2022 F1 season – can you hear that rumble, those new regulation, ultra-wide tires hitting asphalt in Bahrain vroo-boom-boom–ing?

For some of us in North America, Netflix’s docu-ish series Drive to Survive instigated F1 interest when it dropped in 2019 – or 2020, even if it took draining need-to-watch lists to get too. Since then it’s turned into true F1 fandom and we’re ready to roll.

What to know (starting with why to follow the races, not just wait for DTS) and what to look forward to for F1 2022, including a couple of our own musings. 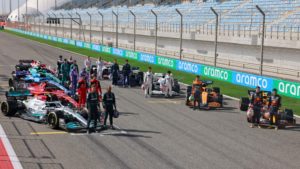 Why to watch, now:

AND, a little recap:

As promised a couple personal notes:

It’s not even too early in the morning EST (there are some Sunday’s later season that will be) so see you at 11EST March 20. To watch in Canada, stream it live on TSN in English & RDS in French. In the US it’s on ESPN. OR sign up directly for Formula1 TV on their website for all races including Saturday qualifiers here.