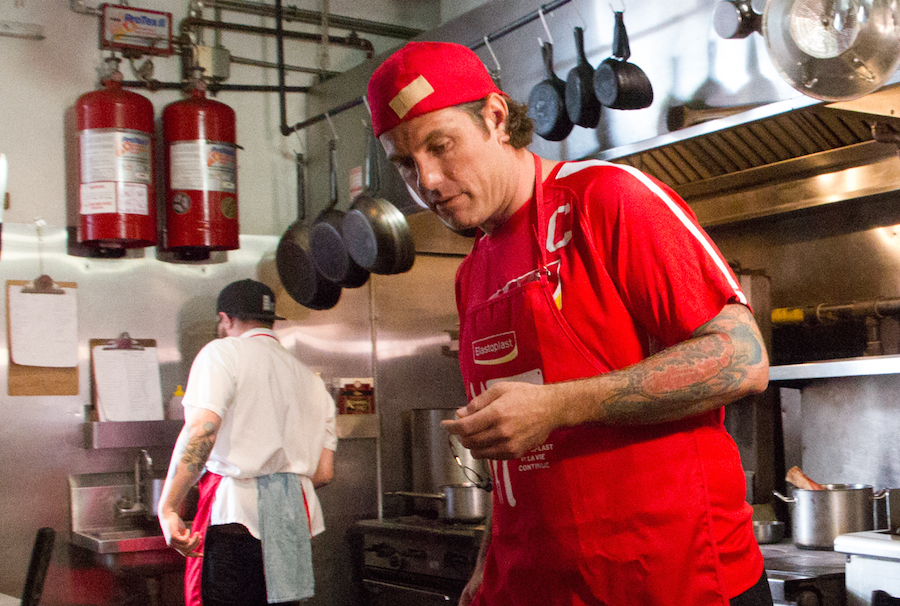 Last week we had the pleasure of attending a street hockey tournament at Parts & Labour in Toronto hosted by Montreal-based Iron Chef winner Chuck Hughes and Elastoplast. Chuck faced off with Parts and Labour owner Matty Matheson and much to Chuck’s chagrin, Toronto came out on top this time.

We had the chance to chat with Chuck after the game about some of his favourite things including his love for liver, mustard pickles and strangely enough the simple food he makes for his seventeen-month-old child.

Chuck Hughes: I like veal liver a lot. It’s something that I truly enjoy; my mom used to make it for me as a kid, really bad, but I still loved it. She used to serve it with creamed corn, bacon, and mashed potatoes. I learned how to cook it and it’s delicious chopped, as pâté, and steak; I like it all. It’s one, or probably my favourite.

CH: I’ve got two. One’s really boring: Ketchup. It’s fucking so good, it’s hard to beat, it’s got everything that I love: it’s sweet, it’s vinegary, it’s bad for you, and it makes everything fucking delicious. Also, mustard pickles, something from Newfoundland, it’s basically pickles and mustard mixed together and it’s the bomb. They call it Mustard Pickles, or mudders pickles, for mom’s pickles, because every mudder makes it, yahknow boy!

And like anybody else, hot sauce, like Sriracha and all that shit, you can’t go wrong. I’m done with the concept of it, but the flavour is amazing, I know it’s everywhere, it’s annoying that it’s so good, but it really is that good, so it’s a love hate, but I definitely put it on everything.

CH: That’s a tough question right now. There’s so many good spots and I haven’t had the chance to go to too many of them. But I’m a big fan of Matty [Matthew James Matheson] here at P&L, I love Rob Gentile, anything that he does I’m down with, 416 Snack Bar, [Bar] Raval, and I love Bar Isabel, it’s magical. Then there’s the ratty nasty spots which are always classic to me, you know the little hole in the wall weirdo places. I like to go to Carousel Bakery and have a peameal sandwich, which I know is very touristy. I’m from Montreal, we have smoked meat and everything else, but we just don’t have a good peameal, and they’re phenomenal people, so I like to go in and say “what’s up.”

Diahlo is also amazing, there are just so many spots. You guys have people and money, which is the perfect storm for food.

CH: Montreal right now is booming. The 40-seat hipster places are all over. But right now the best spots are probably Hôtel Herman, Maison Publique is phenominal, Borderline (I’m jealous of him, his food is so simple, but it’s just so good)… I’m missing so many. This little shawarma place called Sumac; the Satay Brothers do great pork buns; and then you know we have the real ratty classics like Snoudon Deli, nobody knows about it, everybody talks about Schwartz, you know Schwartz is okay, but I go to Snowdon Deli – every waitress is a hundred-years-old and there’s just something to that you can’t beat. There’s a great burger place call Uniburger that just opened a year or two ago, we have a lot of good food [In Montreal], we’re lucky.

CH: Anything street food in Asia is probably the best shit on earth. They’ve just mastered the spicy, sticky, salty, sweet, crunchy, in one bite somehow. They’re the unsung heros of food and nobody knows about them, nobody cares, nobody asks. They’re just solid, day in day out, five bucks and you have the best meal ever; those are the people I really get inspired by mostly now.

I like to try the hip spots and see what’s new and all that but really I think those are the people that inspire me most. You know like lobster fisherman who cook a lobster right on their boat in just salt water, and it’s the best shit you’ll ever eat. All those experiences, that us humans don’t know about because we’re just not there, but those are the moments that are up there for me.

It’s gonna sound kind of stupid, but, I have a seventeen month old kid and it’s not necessarily the most memorable meal I’ve had, but in the restaurants we cook with everything, butter, salt, spice, this that, and I started cooking for him, very naturally, without adding stuff, and I’ve kind of fallen in love with ingredients on there own, without adding a million pounds of butter or salt.

One of the things I tripped on was just apple, cooked down and reduced, so it becomes thick and sweet and almost like a caramel, but I didn’t add anything else, I just kind of developed the flavours, let that sugar intensify and the moisture evaporate, until I had almost an apple pudding, that’s comparable to apple butter. I’m always eating in restaruants where everything is transformed, so this has been an eye-opener to go back to basics. Like cooking a whole sweet potato in the oven, roasting it whole and just eating a piece without anything else. I kind of rediscovered that a little bit, which I wasn’t expecting, I was like “this is going to be boring,” and it wasn’t.