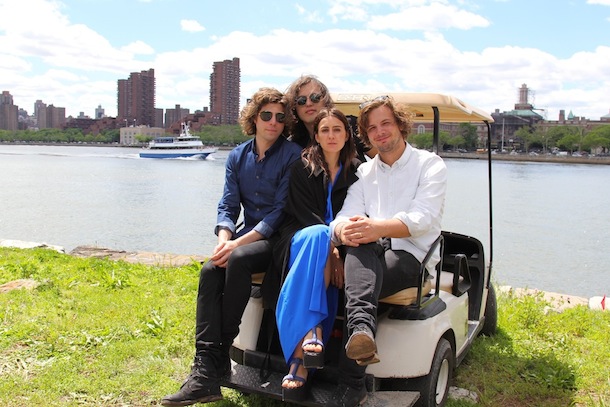 We had a chance to sit down with the New York based indie pop band Haerts last weekend at the Governors Ball Music Festival in New York after their set. Backstage we casually chatted with them about their origins, their sense of style, their projections as artists on the rise, and the ever revealing question, Biggie or Tupac.

Ben Gebert: Germany.
Nini Fabi: I was born in Columbus, Ohio. I grew up in Munich, Germany.
Derek McWilliams: I’m from just outside London.
Garrett Ienner: I grew up outside New York.

Sidewalk Huste: Who / what are you wearing right now?

Nini Fabi: I’m wearing my new friend Valentina Kova, she’s a New York designer, she’s from Russia. I actually just met her a few weeks ago and she designed this for me. She had the design and she made this colour for me because I really wanted to wear something blue, and she makes this gorgeous cobalt blue. I’m very very lucky to be working with her.

Sidewalk Hustle: And the shoes?

Nini Fabi: I wanted to wear something German so I’m wearing adidas. You wouldn’t think so right? Opening Ceremony and adidas; they did a collaboration. My jacket is Topshop (laughs).

Sidewalk Hustle: Who are you listening to right now?

Nini Fabi: We’re listening to a lot of music always. We’re listening to War on Drugs, Real Estate, the new Beck album, and then as far as older stuff goes, you know we’ve recently actually been listening to the divas quite a lot…
Garrett Ienner: The 90’s Three Divas.
Nini Fabi: Celine, Mariah, and Whitney.
Derek McWilliams: Dire Straits too. Womack & Womack, that was just me.
Nini Fabi: So much music. I actually like that you asked ‘what are you listening to’ and not, ‘what are you inspired by’ because I think that’s actually the difficult question. When someone asks you that, it always becomes something where you feel like someone’s going to pin that down.

Sidewalk Hustle: Where would you like to be in five years?

Garrett Ienner: Bahamas.
Nini Fabi: As a band, no, I think New York has become all of our homes, so if you speak about a place, we’ll probably be in New York. For me I just hope we’ll be making another record and hopefully being able to tour as much as we can and kind of do the same thing we’re doing now only on a different scale. I think that for us that’s what we’re working for as a band. We try to, through the years, reach as many people as we can and make good work, I think that’s the main thing for us. Everything around us, you know, we’re talking about the dress, that’s all fine, but I think we just want to do really good work and develop as musicians.

Garrett Ienner: For me it’s easy, I’m from the East coast. It’s Biggie, because I’m from here, that’s not even a question.
Nini Fabi: I would say Biggie.
Derek McWilliams: Biggie.
Ben Gebert:  I don’t understand the question. So I’m neutral. I know Tupac…
Nini Fabi: Beni and I, we grew up in a different place.
Derek McWilliams: The three of us  grew up in a different world.
Nini Fabi: Not a different world, but not in the US. But I knew Biggie and Tupac in Germany growing up.