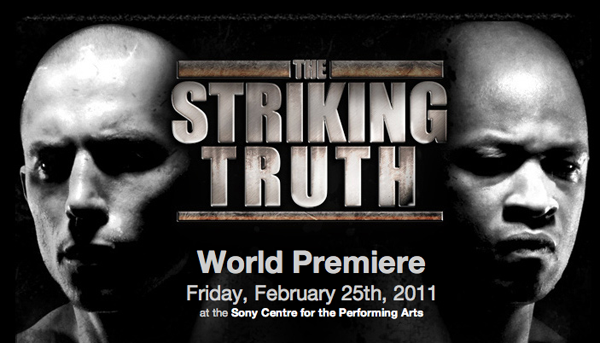 Well this is a bit of exciting news! The Striking Truth, a film about the lives of two fighters, UFC champion Georges St-Pierre and MMA fighter David “The Crow” Loiseau, over the last four years, starting with UFC 58 USA vs. Canada where Loiseau was fighting for the championship against Rich Franklin and Georges was the co-main event against BJ Penn. The film juxtaposes both athletes careers with St. Pierre’s meteoric rise to UFC champion and Loiseau facing personal challenges. The movie delves into their respective ups and downs as it follow both fighters paths. The film includes exclusive, never before seen and behind the scenes footage that will give an insight into the world of MMA as well as the characters of GSP and The Crow, previously only known by only those closest to them.

The World Premiere of THE STRIKING TRUTH, will be held on February 25th, 2011 at The Sony Centre for the Performing Arts in Toronto. Georges St-Pierre will be at the premiere and will hold a Q&A where fans get a chance to talk to him directly. To buy tickets to this one of a kind event click HERE, and follow The Striking Truth on Twitter at @strikingtruth for details and info.

Watch the trailer below and go get your tickets NOW!!! 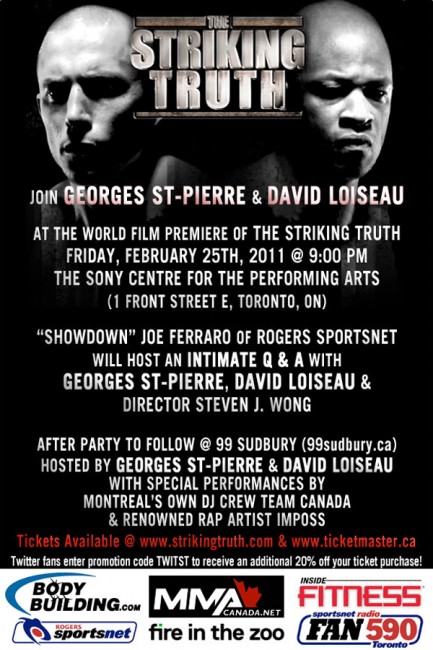