We just returned from this year’s edition of Festival d’été de Québec where we witnessed three days of fantastic performances (as well as a little bit of rap history along the way) and our hearts are full of love for Quebec City and its people, home to the longest continuously running music festival in the world.

Boasting several stages with over 100,000 fans in attendance (and the largest non-permanent stage in North America), FEQ 2019 was packed full with stellar artists this time around with headlining sets from the likes of Kygo, Diplo, Daniel Caesar, Mariah Carey, Gucci Mane, Logic and more.

Check out the best photos of the festival below and visit the official website to learn more about FEQ.

Our first day at FEQ 2019 began with an early set from Sidewalk Hustle alumni, BAD CHILD, over at the Fibe Stage and he absolutely killed it. Performing like he was on the main stage, Steinberg quickly won over the sparse crowd as they formed a real audience and rocked out to several of his recent records like “BAD CHILD,” “Payback,” “Desert Island Lover,” “Breathing Fire” and some unreleased tracks from his highly-anticipated upcoming FREE TRIAL project.

The rest of Day 1 was spent over at the main stage where rising singer bülow kicked off the day to an enormous audience. The 19-year old JUNO nominee only debuted in 2017 but was performing hit after hit like “Not a Love Song” and “Sweet Little Lies” to a crowd of screaming fans – and they really knew the words. Accompanied by a band and some impressive visuals, bülow explored every inch of the massive stage and bounced along as fans sang and clapped along to her synthy love tracks.

Diplo was a clear crowd favourite – even remarking that this was his third time playing the festival – and gave them a time to remember with an insane visual show to go along with an extremely diverse set including everything from Major Lazer stuff all the way to his “Old Town Road” remix. Smoke, flames and confetti filled the Plains of Abraham as Diplo turned the festival into a massive dance party as the vibrant light show revealed the size of the crowd – some 80,000 people.

The night concluded with a dream-like performance from Kygo as he dramatically emerged from the stage with his DJ set-up – the energy not letting up from beginning to end. Clever camera angles showed Kygo’s point of view on the enormous screens behind him when colourful graphics of forests, butterflies, flames, etc. weren’t accompanying the energy of the set. Mid-way through the show, the Norwegian DJ slowed the show down to briefly pay tribute to the late Avicii before speeding it back up to play several of the prolific Swedish DJ’s tracks. Fireworks exploded above the festival to signal the end of Kygo’s time at FEQ, lighting up the screaming crowd and bringing an end to our first day at the festival.

Fellow Canadian and jazz singer/songwriter Nikki Yanofsky kicked off our second day at the festival. You may remember Yanofsky from when she sang “I Believe,” the official theme from the 2010 Winter Olympic Games but she has spent the last 9 years developing a much more interesting and contemporary jazz sound.

Toronto’s own Daniel Caesar set the tone for the rest of the evening, performing several cuts from his brand new CASE STUDY 01 album as well as certified hits from his debut, Freudian. The Grammy winner arrived to the stage with a fresh cut and oversized hoodie and the dedicated fans recited back every word to hits like “Get You,” “Best Part,” “Who Hurt You,” “Love Again,” “We Find Love” and more. While his newest project is more experimental in nature than his gospel-filled debut, Caesar’s crowd was just as enthusiastic for new records and sounds from the singer/songwriter – the young artist even expressed specific appreciation for fans who have stuck with him through the ups and downs of his celebrity. 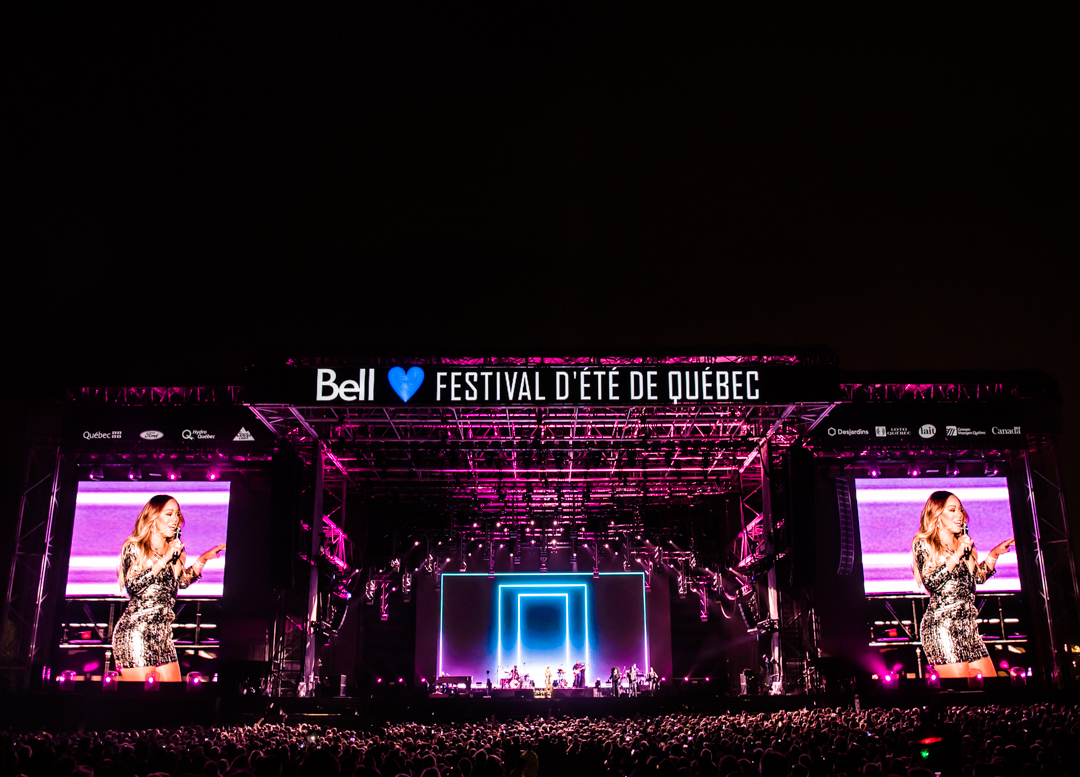 Rain began to fall heavily as the stage was converted over for Mariah Carey’s headlining set but fans stayed true and poncho’d up for the remaining hours of the evening. After a short delay, enormous “M” graphics took over the stage and set the tone for Mariah’s arrival. Commenting numerous times about the rain – joking about the condition of the pools of water on stage, Carey stayed remarkably positive for the entirety of the show and lead the enthusiastic crowd through performances of her catalogue of hits like “Touch My Body,” “Hero,” “With You,” “We Belong Together” and countless more.

Our final day at FEQ 2019 began with an early but fiery performance from Sidewalk Hustle alumni Haviah Mighty as she exploded across the stage (accompanied by her DJ, Dem Ones) performing cuts from her recently released debut album, 13th Floor. The small audience around the free Fibe Stage quickly grew as Haviah’s bars from tracks like “Smoke,” “In Women Colour” and “Waves” rang out across the pavilion. The Toronto MC even treated the crowd to a special live performance of the JAYEMKAYEM remix of her track “Thirteen” mixed with Gunna’s “Speed It Up.”

We spent the rest of our last day at FEQ over at the Plains of Abraham starting with an insane performance from Alaclair Ensemble, a genre-bending musical collective formed in Quebec City best described as a Quebecois Brockhampton. The crowd absolutely lost it as Alaclair took over the stage, backed by trippy moving graphics, and lead them through banger after banger almost entirely in French although many of the tracks have frequent English references as the group strongly believes in breaking down barriers between contemporary Francophone and Anglophone societies in Canada.

Toronto’s Jazz Cartier was a clear hit of the night – the highly skilled and energetic performer taking advantage of every possible vantage point he could stand on top of from stage to the sound tent. Taking the crowd through gigantic performances of “Dead Or Alive,” “New Religion,” “Right Now,” “Red Alert” and more, Jazz thanked Quebec City for continuing to support him and dedicated the end of his set to A$AP Rocky who is currently facing harrowing circumstances while being held under arrest in a Swedish detention center. You can sign the petition for his freedom here.

Without a doubt, the highlight of our third day at FEQ 2019 was the Canadian debut of Atlanta rap legend Gucci Mane. Appearing on stage to screams and chants of “GUCCI! GUCCI!,” the rapper known as the East Atlanta Santa could not stop smiling as he came face to face with tens of thousands of Canadian fans who he had been waiting to meet his entire career. Gucci performed all the essentials from his catalogue spanning as far back as “Lemonade” and “Make tha Trap Say Aye” all the way up to recent hits like “Slippery,” “Back On Road” and more.

Logic closed out the night with a lengthy set that clearly demonstrated why he was booked as the headliner. Beginning with a repeating of his pledge to preach peace, love and positivity, the night quickly turned into a high energy rap show packed with numerous hits from the Maryland rapper like “1-800-273-8255,” “Homicide,” “Everyday,” “Sucker for Pain” and more. Logic flowed between singing and rapping effortlessly, jumping across the stage and performing inspiring feats of crowd control like massive call-and-response chants and waving of his arms like a conductor to raise and lower the volume of the audience’s screams.