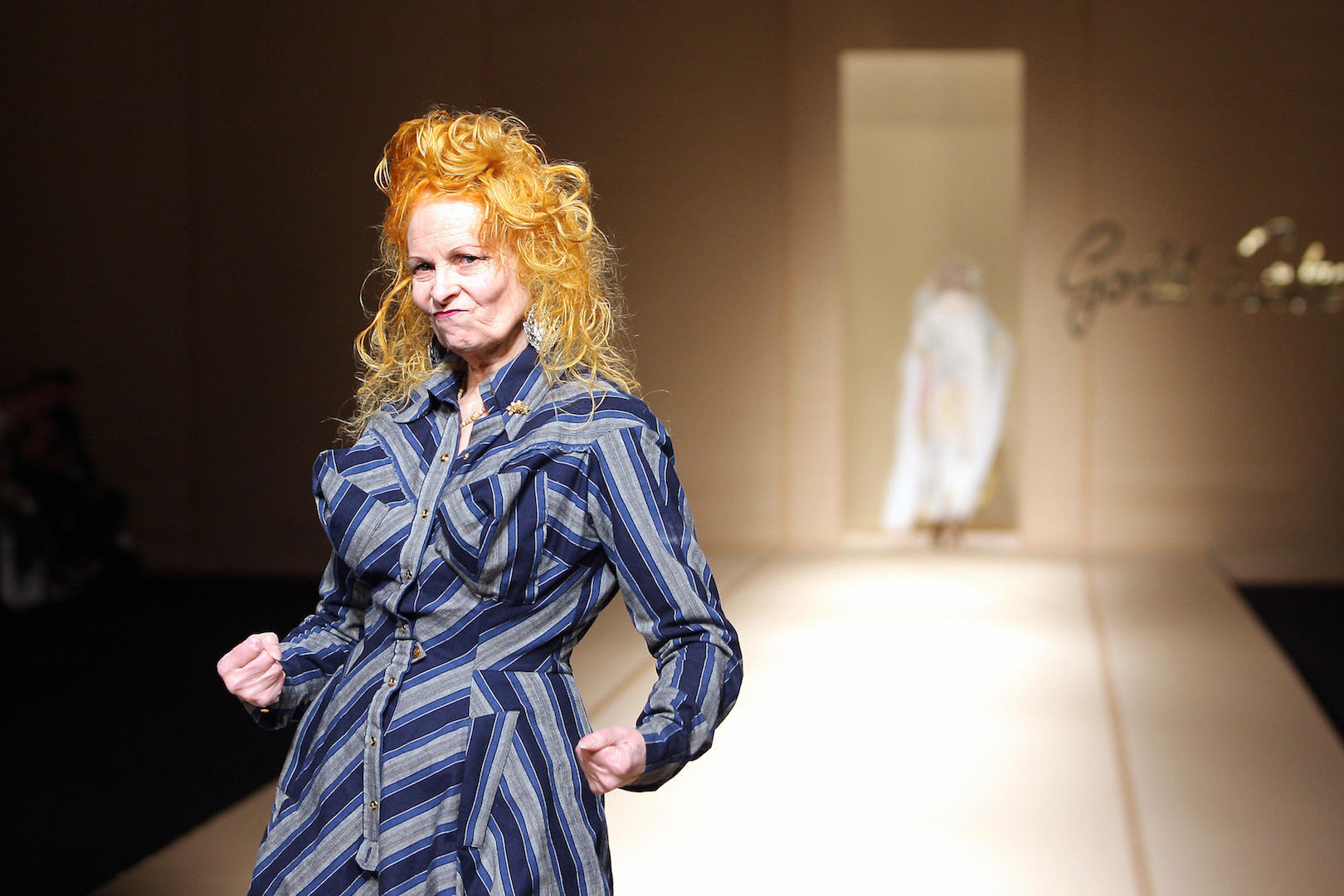 “Provocative, beautiful, respectful—it’s hard to imagine that one designer can be all those things.” – Christina Hendricks

“If I could learn one thing it would be to learn Chinese,” says Vivienne Westwood in the opening minutes of the new documentary on her. Having made its debut at this year’s Sundance Film Festival, the 83-minute film digs into Westwood’s rise in the fashion industry and the struggles she had to face to get there. It details the headstrong woman that never quit.

Westwood: Punk, Icon, Activist premieres in Toronto on June 29, and ahead of the screening we chatted with producer/director Lorna Tucker about the film and her reasons for making it. 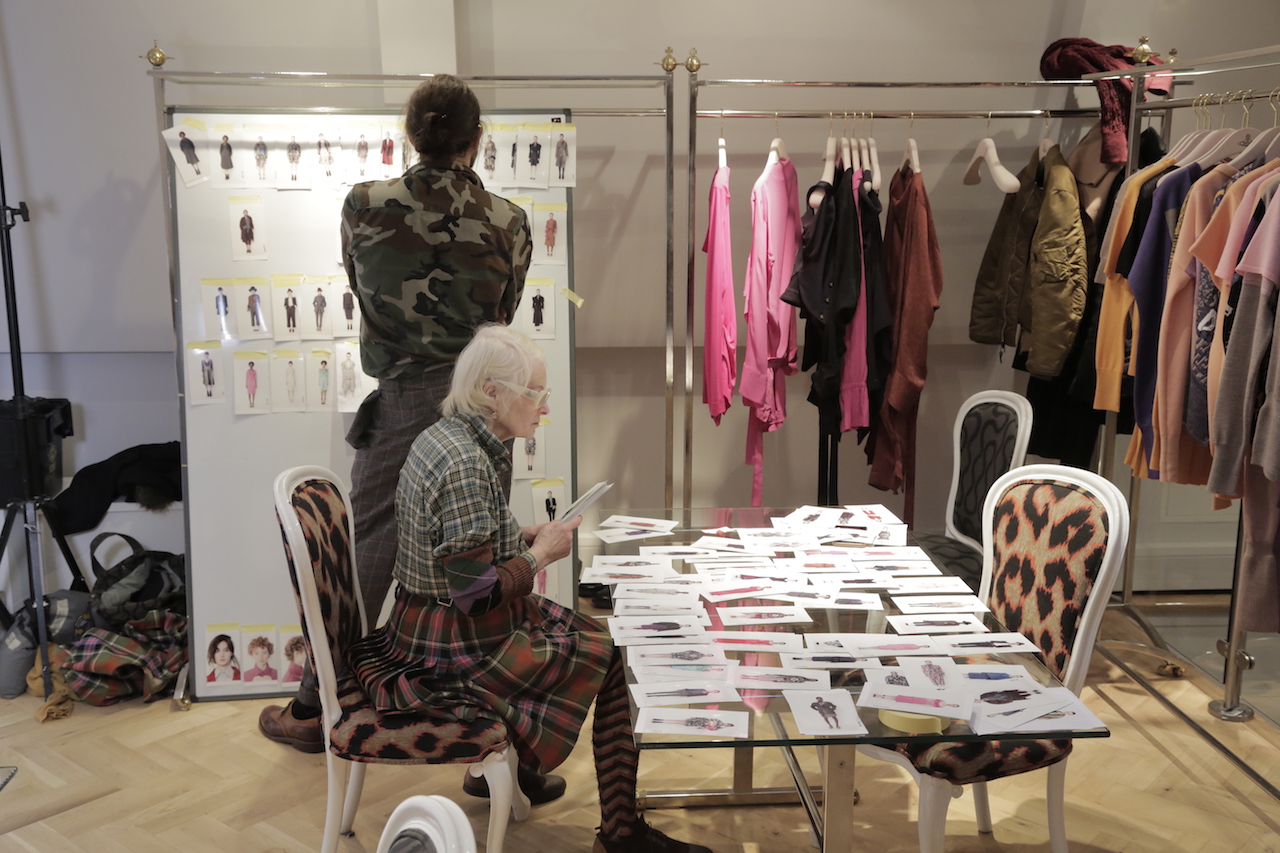 “We had to grind her down, no matter how much she says she doesn’t like talking about things and the reason I left that in the film was to show how difficult it was to get her to talk about something other than what she wants to talk about,” Tucker tells Sidewalk Hustle. “I felt the things she didn’t want to talk about were the things a new generation needed to hear or they wouldn’t listen to her or her message later on in the film.”

For Tucker the documentary was about showing a “portrait of an artist, but also how she’s trying to leave something that is strong and sustainable for the next generation, documenting conflicting parts of the industry and her.”

Westwood started making clothes when she was in her pre-teens and while the film shows her affinity for fashion, there’s a greater purpose attached to this affinity, one that stretches beyond just the fabric.

“When I was little I saw a picture of the crucifixion and it really did change my life. I thought to myself, ‘my parents they’ve been deceiving me, they told me all about Baby Jesus but they never told me what happened to him.’ I just thought ‘I just can’t trust people in this world I’ve got to find out for myself’,” says Westwood. “I did feel like I had to be like a knight to stop people from doing terrible things to each other and I think that has something to do with my fashion clothes as well, it’s always got to be that…you’ve got to cut a figure and be prepared for action and engagement with things.”

While fashion was her dream, actually making a living off it was not easy and especially difficult coming from a working-class family. To make ends meet, Westwood began teaching so she could be an artist and a school teacher.

During her transition, she met and began dating mover and shaker Malcolm McLaren, and the two began selling records out of the back half of a shop (Mr. Freedom, which in 1971 became their own boutique called Let It Rock) in London. Fashion and music were extensions for the two to reach people. So was sex (“not about sexual identity but enjoyment of life”).

“Malcolm had the idea that we were going to confront the establishment using sex. His slogan was ‘Rubberware for the Office,” explains Westwood.

Together they “invented punk” too and when Malcolm returned from the United States—where he had been managing the New York Dolls—he put together a “pop group from our Saturday boy Glen and a couple of our customers,” says Westwood. The group formed as the Sex Pistols. “Johnny Rotten was quite a phenomenon, he hasn’t changed from that phenomenon, unfortunately. He should’ve changed to something else by now,” says Westwood.

The music from the Sex Pistols and Westwood’s creations, this shirt being one, if not the most iconic, created a dialogue between a generation. A raging distrust against the establishment was happening through music and through shredded, torn-up and straightjacket-like apparel. There was a form of resist and restriction and Westwood was at the hem of it all.

Although McLaren and Westwood started a new wave enterprise, their relationship fizzled and the two parted ways. McLaren went on to do the music managing thing in the States.

While teaching in Austria she met her now husband, Andreas Kronthaler, who was her student at the time. They’ve been married since 1992 and Kronthaler not only designs but he serves as the artistic director of the Vivienne Westwood brand.

The dynamic of their relationship is unabashedly presented in the film. Their love can be felt. The same goes for their squabbles and creative banter. Before creating the film though, Tucker was skeptical about this relationship but was soon doled a heap of humble pie.

“I have friends who thought he was gay, not in a crass way, but I wanted to explore their relationship. I was surprised at how loving it is, but it is also so impossibly bonkers. It’s one you can’t get your head around but it is loving and caring,” explains Tucker. “These two are trapped in a bubble…they really are artists, really in their world. It’s incredible to watch.”

The film also highlights the stress that Kronthaler has come to experience, having essentially taking over much of the labour of the brand in recent years. But even with his drive and undeniable skill, he still needs her validation.

“He’s growing in confidence and designing his collection, but you see him hanging off her every word. What she thinks and says means everything to him and he really does look after her too. Any prejudgements I or anyone had were completely destroyed. It’s not a relationship I would’ve understood until I filmed, but it works,” adds Tucker.

In the documentary their partnership is referred to as her being “the science teacher” and Kronthaler being “the mess, the art student, the chaos.” Together they make true art. 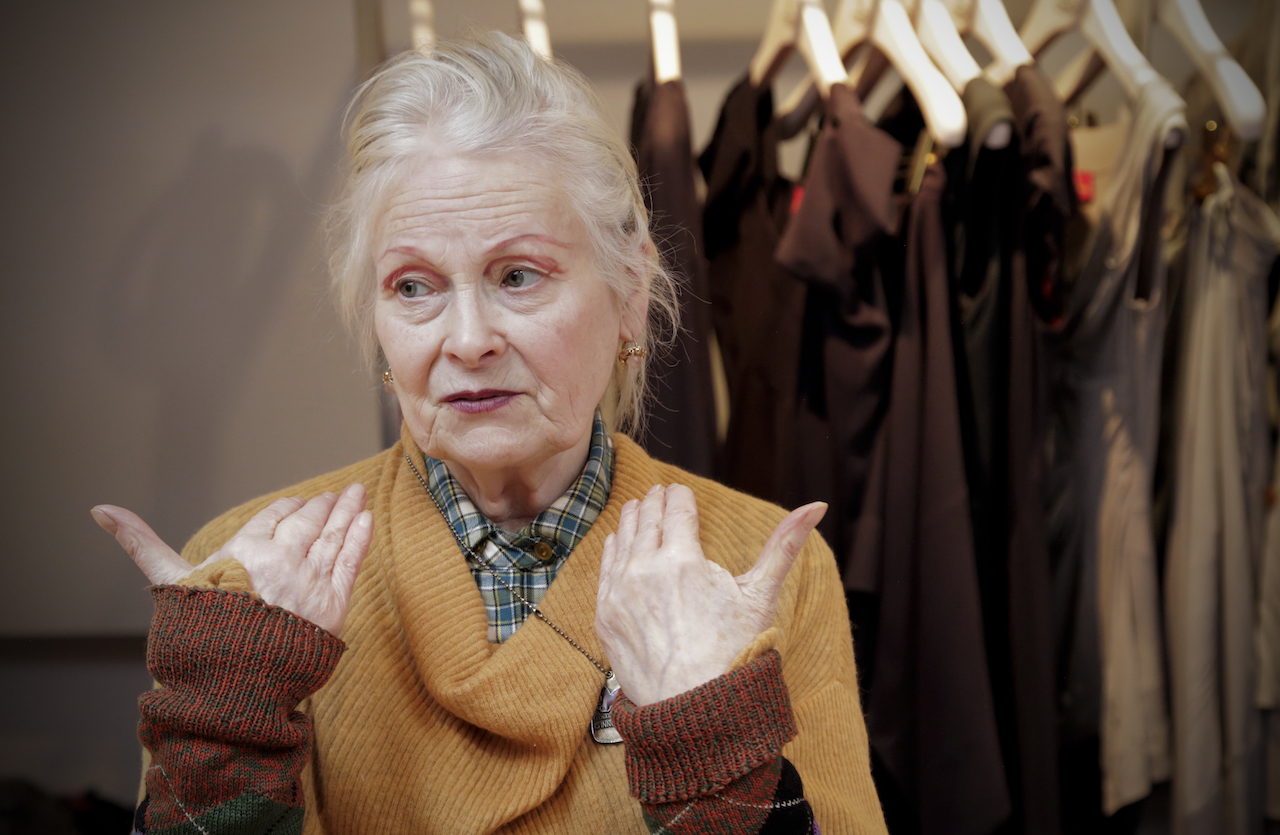 Westwood: Punk, Icon, Activist premiered first at Sundance, although that was not expected. After Tucker had submitted the rough cut she thought there was no chance it would be accepted, but when she and her team got the news they moved quick, finishing and exporting it two days before getting on a place to go to the festival.

The film also features a handful of celebrities, but don’t expect it to be all about their vanity, Tucker wasn’t keen on making it about the celebrities and their message.

“I always knew I wanted it to be Vivienne’s narration and then bring in people that were literally sleeping in her bed or living with her during the time when she was going through crisis, which she didn’t want to talk about,” says Tucker. It was in these moments that she would bring in Westwood’s sons to tell their accounts to “illustrate her life” and let the audience know of a woman who “was not really financially stable until her late forties, mid-fifties” as well as the message about “not giving up even if the world is laughing at you.”

There’s a scene where Westwood presents her clothes on a British talk show only to get laughed at, the audience thought her collection was meant as a joke. It was not. Westwood is seen evidently baffled on camera (“I’ve never had this reaction”), but she moves on with strong footing.

She continued such footing even amid the British public’s often disdain (or lack of understanding), winning the British Designer of the Year award twice (1990, 1991). She was awarded the Order of the British Empire in 1992 and 2006.

The documentary also shows where Vivienne Westwood is today, an iconic designer but also an activist, heavily attached to making the world a better place. Fracking, the environment, the “green economy” are all vital in her crusade today.

As for celebrities: Pamela Anderson, Kate Moss and Christina Hendricks (who cherishes Westwood for being a designer that creates fashions for curvier, not stick thin bodies) all make their way into the film—at the end though.

“I did that purposely” laughs Tucker.

Westwood: Punk, Icon, Activist has a one-week engagement in Toronto (tickets on sale to TIFF members on June 20 and for the public on June 21) and opens in Vancouver on June 29, too.

For more on Lorna Tucker, FYI she has another new documentary worth noting, head here.