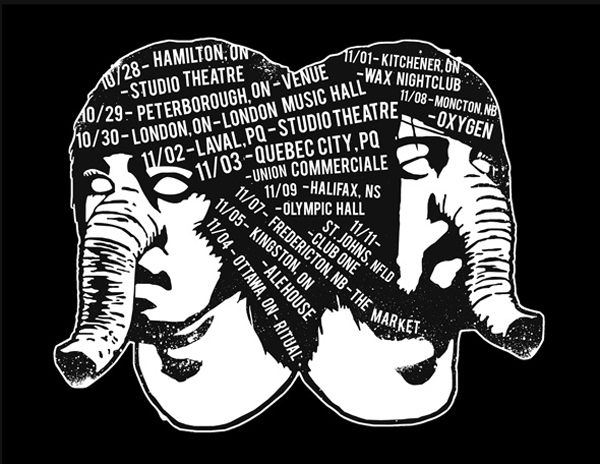 This just happened! Sebastian Grainger of Death From Above 1979 has confirmed via the band’s website that the band is hitting the road to play new material on a small venue Canadian tour. The new material will be their first since releasing their only full-length album  You’re a Woman, I’m a Machine way back in 2004. Grainger posted a rather telling and somewhat touching letter that tells of the band’s early days, which you can read below.

The upcoming tour really is a small venue tour, with all the shows effectively in minor markets. As a Death From Above fan I have to say this is great news and if you can make it to one of these shows, do it! Read Sebastian’s open letter below.

Almost exactly eleven years ago to the day, Jesse picked up a bass and wrote three songs. He recorded them to his 8-track recorder (far too many tracks as it turns out) then played them for me in his car and said, “We should start a band.”
I said, “Ok.”
So we wrote a couple more songs.
Nine months later Jesse said, “We should go play some shows.”
I said, “Ok.”
We got into Jesse’s car (‘93 Honda) and drove to Cleveland to play a show in a wrestling gym. After sitting around the parking lot for a couple of hours while a modest crowd of angular-groomed kids gathered, a wrestler with a bleached blond mullet-mohawk drove up in his pick-up truck and said that there would be a no show tonight.
We said, “Ok.”
So we drove through the night across the I-80, counting splattered deer carcasses all the way to New York City, absolutely out of our minds on tall can energy drinks and Ephedrine pills (which were, at the time, still legal).
After arriving Jesse admitted to me that he’d been hallucinating old men walking onto the interstate.
I said: “Ok…”
This was my first trip to NYC, and to say I was happy to be alive would be an understatement.
I may have been really living for the very first time.
We spent that day walking around Manhattan smoking cigarettes, going to record shops and loitering. That evening, still with no sleep, we drove to Long Island and played our first show on a rooftop at someone’s house whom I have no recollection of. We played our five songs as fast and as hard as we could, and within eleven minutes we were done, both of us drenched in sweat and ready to die.
I said: “That was Ok.”
Jesse agreed and we continued in this way, never stopping to think for the next few years. Our way of always moving forward took us from that living room in Long Island, to hockey arenas and around the world a handful of times.

What next? Want to do it all again?
“Ok.”
So here we go. Jesse and I have been writing new songs and the only way we feel like we can make them any good is to go out and play them for people. We’re going to throw our little muscle bound babies to the lions and see who survives. We tried just jumping into the studio, but the songs lacked spirit. They lacked life.
So this tour is song CPR.
There’s no way for us to do it anonymously anymore, so we’re inviting you to come along with us. Watch us Do It. The way we used to. The way everyone used to. We’re a band, and bands just work it out together.