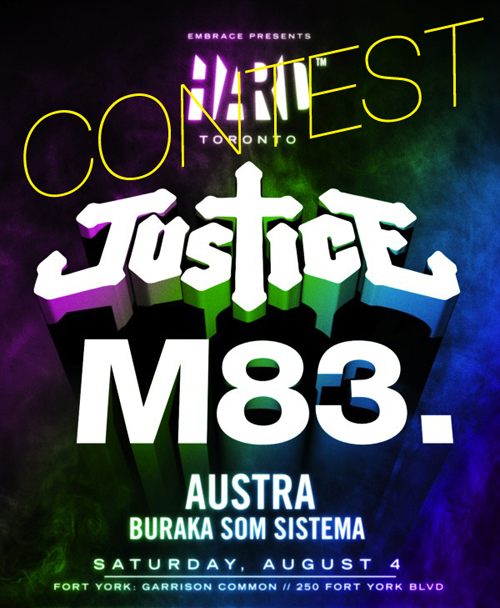 We had this awesome contest last week for a super fantastic Osheaga prize pack, and sadly we could only pick one winner, so we thought we’d give all those staying back in Toronto a chance to party with three of the artists also playing at the festival. Weather you like to dance to Justice with your best french pouty face, or sing along to M83 and Austra, this little triple header has something for all versions of hipster electro fans.

So are you feeling lucky? Wanna win? Go ahead and like us on facebook and while you’re there leave a comment and share the contest post with your friends (they’ll probably want to enter too, right?). Then follow us on twitter and tweet: “I wanna win tickets from @SidewalkHustle to Justice @M83Music & @AustraTalks @HARDFEST Toronto!” (or something along those lines, you get the idea, right?) by Thursday August 2nd at midnight (be sure to follow us and leave us a comment otherwise we won’t be able to let you know you’ve won).

Don’t have twitter? Already follow us and want to stand out extra hard? Leave us a comment below or over on Facebook! The winner will be announced on Friday August 3rd at 8am EST and notified by private message, e-mail, or direct message.

Can’t wait till Friday to see if you’ve won? Buy yourself some tickets here!

UPDATE: The contest is now closed. Congratulations to Chaim Yunger who won a pair of tickets!