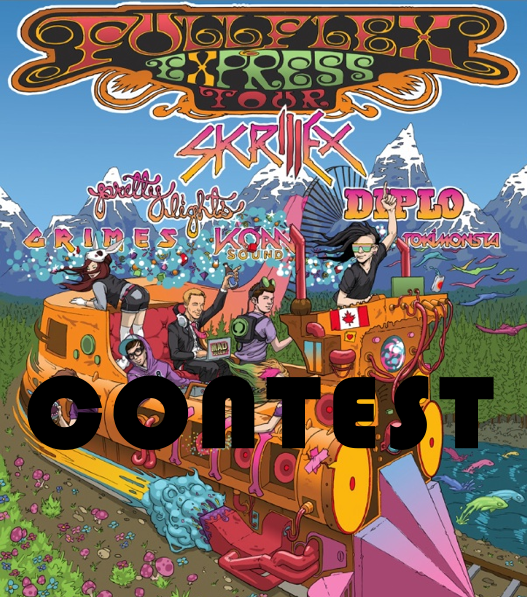 If you haven’t already heard of the Full Flex Express Tour, prepare to have your mind blown! The electronic dance powers of Skrillex, Pretty Lights, Diplo, Grimes, KOAN Sound and Tokimonsta come together on July 13th in Toronto to kick off an innovative new way of touring, inspired by a similar tour back in 1970 with The Grateful Dead, Janis Joplin, and The Band.

The artists will travel on a Via Rail private passenger train stopping at each festival across Canada, starting next week in Toronto and moving on to Ottawa, Montreal, Winnipeg, Edmonton, and Vancouver. We thought it was a pretty rad concept, so we thought we’d hook up one lucky reader!

Wanna’ score some tickets to the hottest party next weekend at Fort York? Go ahead and like us on facebook and while you’re there leave a comment, like and share the contest post with your friends (they’ll probably want to enter too, right?). Then follow us on twitter and tweet: “I want to see @Grimezsz @Skrillex @Diplo @PrettyLights in Toronto for the #FullFlexExpress Tour from @SidewalkHustle!!” (or something along those lines, you get the idea, right?) by Saturday July 7th at midnight (be sure to follow us otherwise we won’t be able to let you know you’ve won).

Don’t have twitter? Leave us a comment below or over on Facebook! The winner will be announced on Sunday July 1st and notified by e-mail of how to pick up their wristband. Can’t wait to see if you’ve won? Buy tickets here!