They say you never know what you got until it’s gone. That was never more apparent than after two magically musical weekends in the desert for the return of The Coachella Valley Music and Arts Festival. There is something profoundly moving about listening to live music, surrounded by people singing along, dancing as the desert sun slowly sets on the horizon.

Clearly, we weren’t the only ones overjoyed to see the mighty music festival make its return. From the parties to the activations and brand presence to simply the vast number of people who attended the return of life as we knew it.

While the two weekends boasted an endless array of surprises and delightful moments, here are a few that stood out to us the most.

While many were disappointed at the last-minute withdrawal of Kanye from the lineup, the addition of Toronto’s own The Weeknd alongside the recently reunited Swedish House mafia was a big move. From his first appearance at Coachella 6-7 years ago with a 5 pm set time to his mighty 2018 headlining set, Abel has become a powerhouse at the festival. Performing a solid 17-track set with even a nod to Ye with a cover of Donda’s “Hurricane,” there was no doubt Toronto was in the house.

Before Harry Styles’s first headlining performance on weekend 1, Daniel Ceaser, a Toronto native, performed an incredibly soulful set on the main stage. Justin Bieber came out to perform a quick couple of verses from his track Peaches before handing the mic back to Caesar to complete his headliner opening set.

Speaking of the headliner, immediately after Caesar’s set, former One Direction lead Harry Styles took to the stage in all Gucci. While he’s not Canadian, he brought out the iconic Shania Twain hit ‘Man! I Feel Like A Woman!’.

Also representing the Maple Leaf, pop-punk band PUP played a set inside the Sonora tent; Carly Rae Jepsen turned it up at the Mojave tent; BADBADNOTGOOD performed their funky jazz in the Gobi tent; Belly with guest appearances by fellow XO label mate Nav in the Gobi to round out Sunday; and of course Arcade Fire made a last-minute announcement that they were performing and filled the Mojave tent to its bursting limits as they ripped through new and old songs.

On weekend 2 up and coming rapper Baby Keem returned to Coachella. During his Friday night performance, he surprised fans by bringing out Kendrick Lamar for “Family Ties”  and “Vent” from his 2021 album The Melodic Blue. This was the surprise that all fans were holding their breath for one weekend 1! Showing that each weekend is always same same but different.

On weekend 1 Harry Styles headlined Coachella again following his debut performance last weekend. During his second set at the festival, Styles brought out Lizzo for a cover of “I Will Survive” by Gloria Gaynor, and the One Direction single “What Makes You Beautiful.”

Saturday night headliner Billie Eilish, also brought the heat to the desert when she brought out special guests Damon Albarn, Blur and Gorillaz frontman to do a version of  “Getting Older.” After that Albarn hungaround while Gorillaz’s “Feel Good Inc.” played with Eilish singing along and and De La Soul’s Pos joined in to do his part from the original track. Very cool.

While music is probably the number one draw to the festival, we can’t forget that it is a music AND arts festival and the art is plays an important roll in setting the mood and tone of the weekends. The festival grounds played host to 6 immersive and interactive installations by 11 international artists and designers. While all unique and spectular in their own right here are our favourites. 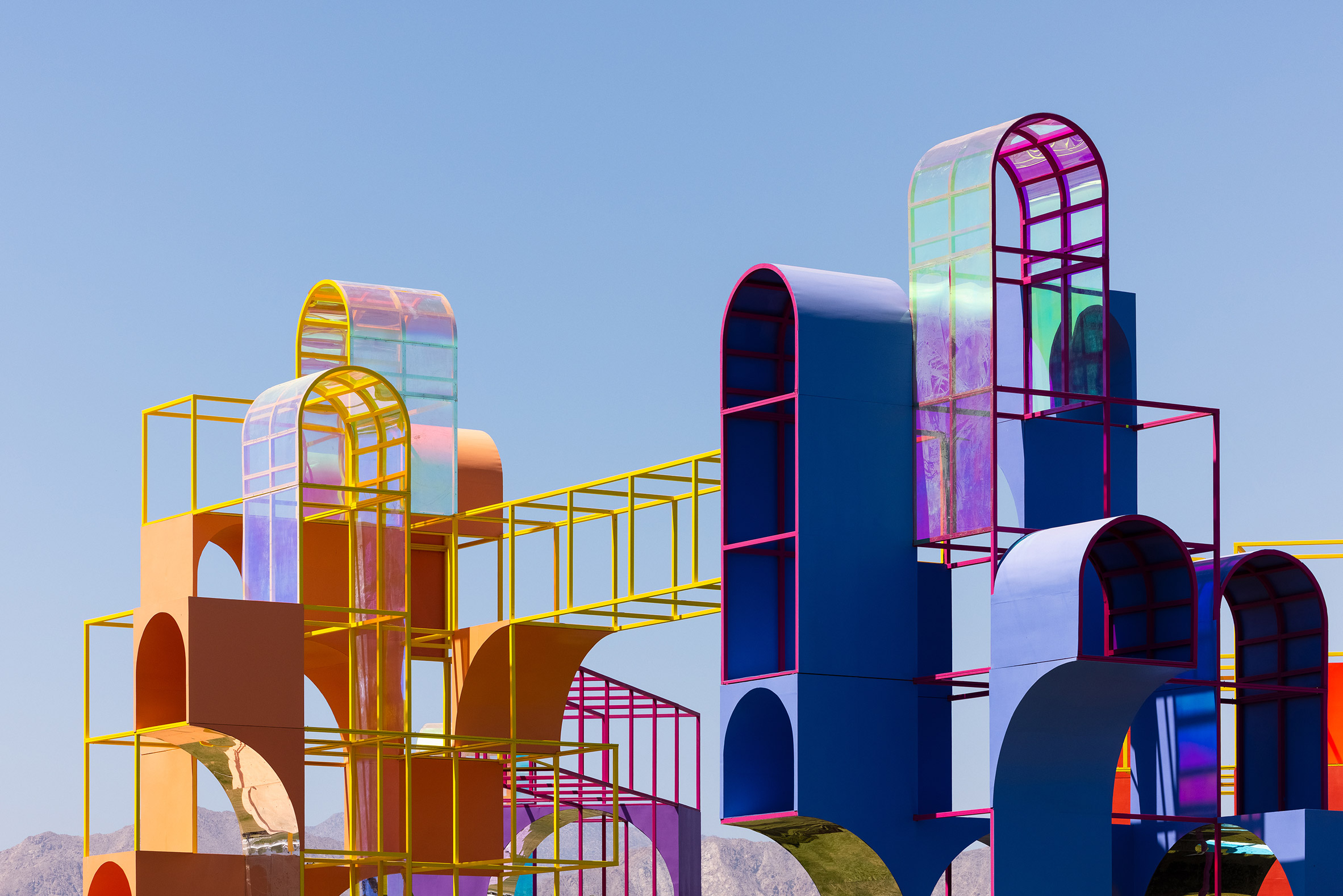 With the idea to bring a fragment of urbanity to the desert, Alessandro Orsini and Nick Roseboro of the New York and Rome-based studio Architensions, created a massive structure made up of four steel-framed towers linked by bridges. A colourful and vertical response to the single-story suburban sprawl found in the Coachella Valley. The module grid framework features four towers, ranging from 42 to 56 feet in height with a few linked by skybridges. Made using a variety of geometric forms, some with cyan, magenta and yellow dichroic film that bathes the surrounding area in colors as the sun shines through them, while at night, the mirrors amplify the lighting, performances, and the activity around the piece. Creating whats known as the fifth dimension of architecture: the experience. 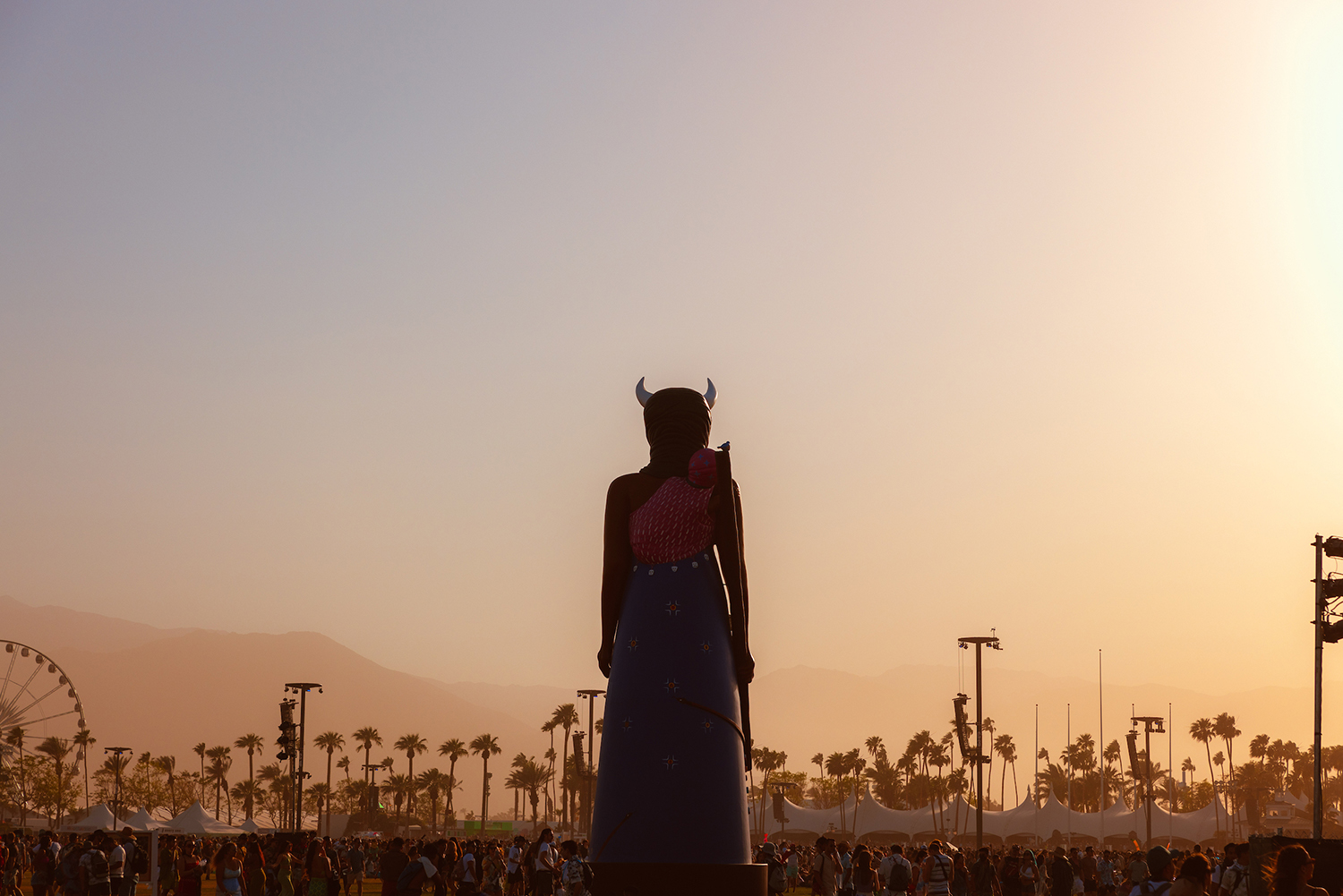 Towering over the festival, stands La Guardiana, the guardian of the immigrants from Mexico, Central America, and around the world, watching over the gathered crowds. Created by Texas-based artists, husband-and-wife duo, Ramon and Christian Cardenas, otherwise known as LosDos, who draw their inspiration and ideas from everyday life in El Paso and Juarez, Mexico. 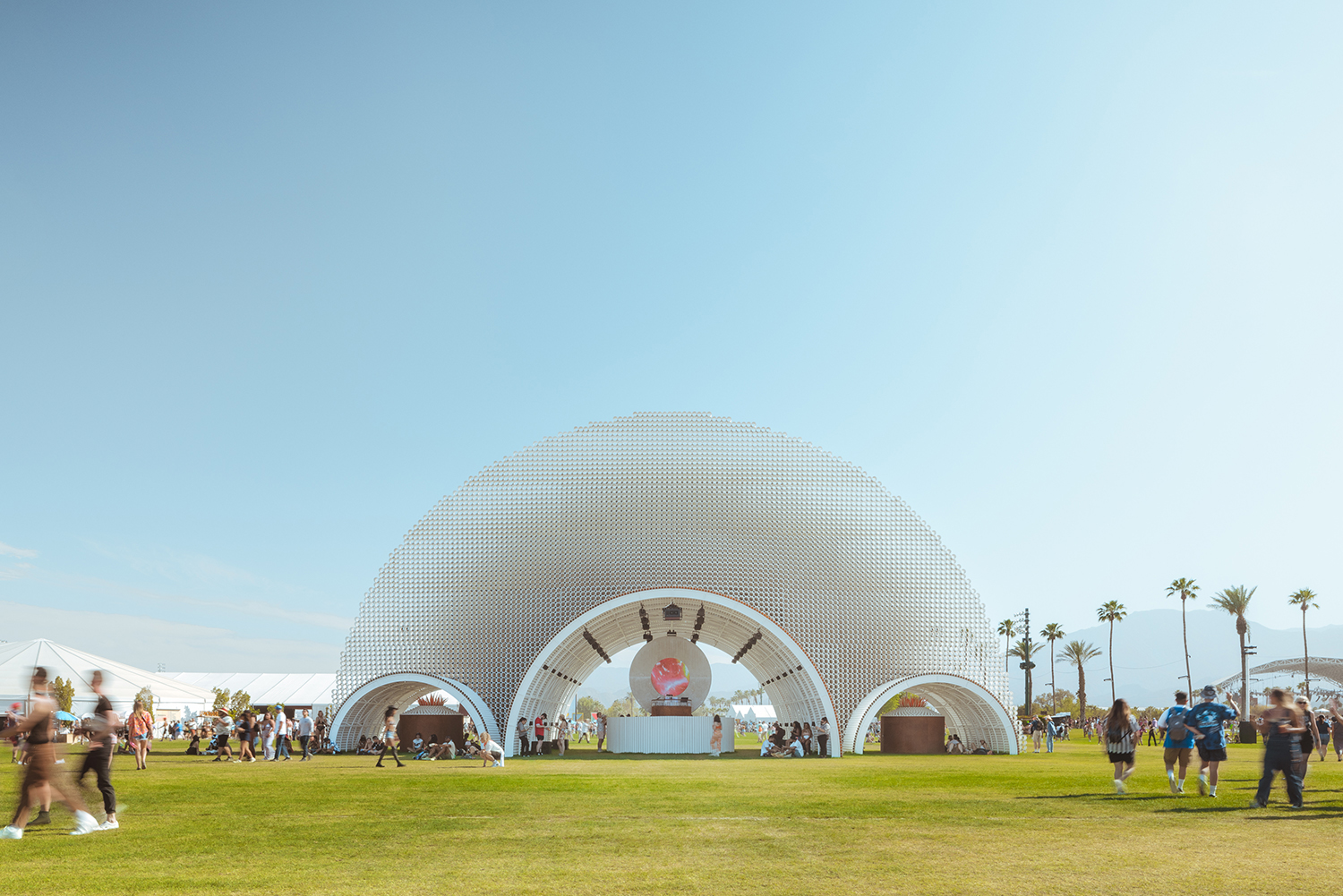 This was way cool. Standing over five-storys-tall, and made with more than 25,000 feet of PVC tubes, Circular Dimensions (Microscape) is a visual delight that represents Christopher Cichocki’s ongoing exploration of water and the history of the desert. The stage like structure features a laboratory where scientists and artists generate experimental ‘video paintings’ by manipulating water, salt, barnacles, and algae from the Salton Sea under microscopes and projecting the activity in real time inside the pavilion’s ‘nucleus.” OH DANG!  While at the same time a soundscape of field recordings and industrial rhythms resonates through the structure’s circular tunnels, changing in intensity from day to night.

StockX
While technically a sponsor activation, resale app StockX took a different approach to their first time appearance at the festival. Creating a colourful little picturesque oasis in between the Sonora and the Gobi tent where people could sit, chill and of course take cute style pics. Feeling like a cross between a stage and a highschool baseball diamond dugout, the three sided instalation was a welcome addition to the polo field.  At a festival where a function and appearance go hand in hand this activation was a unique piece of art in itself.

While this may come as a curve ball, hands down the best performance of the entire two weekends goes to a random fan named Spike. During British rapper Dave’s first weekend performance inside the Mojave tent he brought on stage a young fan from the crowd to rap alongside him. The magical moment took place towards the end of the Sunday night set. After scanning the crowd intently to see who am is this mist frenetic fans was was rapping along the most enthusiastically, Dave called to the stage a young, skinny white kid rocking a soccer jersey and backpack named Spike.

At this point the two, young fan and London rapper (who has a co-signed track with Drake) proceeded to rap Dave and AJ Tracey’s 2016 “Thiago Silva.” Without missing a beat Spike bounced around the stage, going back and forth, trading verse for verse with Dave. Finally wrap his short lived Coachella debut with a simple “Coachella!” roared into the mic.

That. Is. My. Brother. Spike. At. Coachella WITH DAVE! He’s 18. He has school at 8am tomorrow. He was picked out of the crowd. We have never seen him rap before…. pic.twitter.com/kyEYon4e3T

After two full weekends of music, art, and culture, people dancing joyously and singing emotionally it was clear that the magic had finally returned to the desert. And we were happy to be part of it. Until next year!