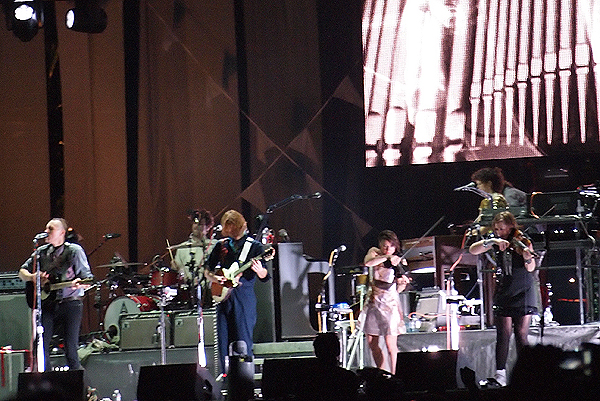 The Saturday night headliners of this years Coachella were Canadian Grammy winners  Arcade Fire, and boy was it a beautiful sight to behold. Hundreds of giant, colour-changing balls dropping from atop the Coachella mainstage as Arcade Fire sang “Wake Up,” and the 60 thousand plus gathered audience joyously sang along word for word. Singer Regine Chassagne danced around the stage, spinning and twirling a rainbow of streamers, while the entire festival ground lights blinked in unison.

“If you told me in 2002 that I’d be headlining Coachella with Animal Collective opening, I’d say you’re full of shit,” frontman Win Butler said at the start of his set and humbly said “Thank you so much. We don’t take this for granted, not even for a second.”

As the night progressed word got out that it was Win’s 31st birthday and the entire crowd of people sang “Happy Birthday.” After this brief interlude, Butler thanked the audience and said “that was the peaceful and thoughtful portion of the show, now let’s do something!” It was at this point that the nine-piece band jumped into the beautifully frantic “Neighborhood #3” followed by “Keep the Car Runnin’,” and rounding out the 18-song, 100 minute long set with my personal favourite “Sprawl II (Mountains Beyond Mountains).” The perfect end to a perfect night.

Check out the entire set and setlist below. Enjoy! 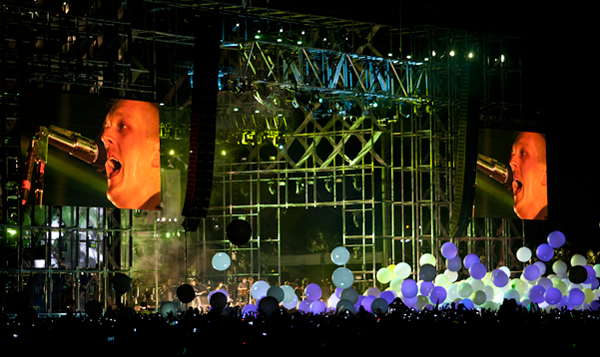 Setlist:
Month of May
Rebellion (Lies)
No Cars Go
HaÃ¯ti
City With No Children
The Suburbs
The Suburbs (Continued)
Crown of Love
Rococo
Intervention
Neighborhood #2 (Laika)
We Used to Wait
Neighborhood #3 (Power Out)
Keep the Car Running
Wake Up