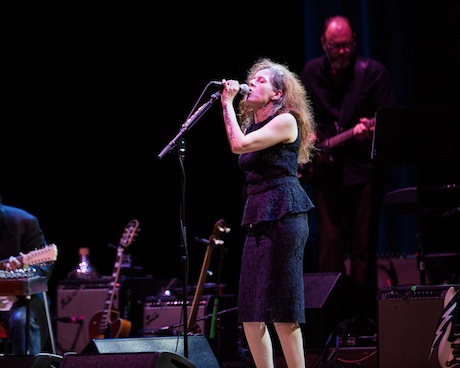 Neko is one of those rare artists who have the ability to write songs that can really get inside a person and change their DNA. When she took to the stage at the acoustically and architecturally gorgeous Massey Hall on Friday and sang, “A chill ran through me/And I grabbed on tight/That was when I left my body for good,” she took the audience with her for the evening. This was no ordinary magic. There was a hint of the ineffable, a sense of immersion into the logic of dreams and a departure from the mundane when the fire-headed singer delved into her songbook. We all knew that we were in for a special evening from the moment she opened her mouth to sing.

Neko Case’s inclusion in the lineup of the Canadian Music Week shouldn’t come as a surprise. She spent time during her student years in Vancouver, and has featured prominently with Canuck power-pop darlings The New Pornographers. She’s recorded a live album with the Sadies, and talks about writing songs backstage at Lee’s Palace.

And so with the ease that can only come with intimacy with her songs and her surroundings, Neko serenaded us with songs that ranged from the personal to primordial. For her second song, she tore into “This Tornado Loves You,” a love song from a tornado that has just ” smashed every transformer with every trailer/till nothing was standing” on its destructive quest for its lover. This is a story of elemental love, possessive, jealous, heedless and all-consuming. The metaphor is turned inside out when the tornado anthropomorphises itself into an articulation of a very human longing: all this violence is because “I miss/How you’d sigh yourself to sleep.”

But these shifts in perspective happens to deftly that it almost goes unnoticed. This is often what allows Neko to construct songs that seem to conceal even as they confess. In “The Pharaohs,” Neko is almost cinematic in the way she evokes the specter of lost love: “You said I was your blue, blue baby, and you were right,” an offhand comment rendered significant by its prescience. Rather than burn in the anguish of unrequited love, Neko turns to ancient archetypes for comfort: “I want the pharaohs”. Ultimately, “there’s only men.”

For all the sleight of hand that goes on in her songs, the emotional highlight of the evening was undoubtedly the a cappella version of “Nearly Midnight, Honolulu.” The protagonist of the song is waiting at a bus stop in Honolulu when she witnesses a mother telling her child “Get the fuck away from me! Why don’t you ever shut up?” There are no ambiguous intermediaries in this song – it is addressed directly to the child at the bus stop. The protagonist offers the child some hard-headed, practical advice, but the silences in the room revealed a sadness so deep that could not be approached with words. The song ultimately closes with a simple “I still love you” – an emphatic, unequivocal message in a bottle for a child that she will likely never see again.

While parsing Neko’s dense, labyrinthine lyrics can probably continue till eternity, it wouldn’t convey the richness, the crystalline beauty of Neko’s moonbeam of a voice that elevates the extraordinary to the transcendental. It’s just one of those things. You had to be there.