Tucked away in the furthest reaches of Europe, literally as far north and east as you can get before you’re in Russia, is one of Scandinavia’s best-kept secrets, Helsinki. Often overlooked in favour of Stockholm or Copenhagen, Helsinki is a big small city, with a cultural influence worth exploring. From a vibrant coffee culture to labyrinthine vintage shops, museums, and tiny world-renown restaurants, the city is a refreshingly chill change from the unnecessary hub-bob of other European cities.

Finland’s southern capital sits on a peninsula stretching out into the aptly named Gulf of Finland. With its beautiful central avenue, Mannerheimintie, flanked by several incredible museums and government buildings, Helsinki is a little piece of perfect located in the (almost) arctic north. We’ve compiled a list of the absolute must do’s and must see’s to make any trip the best trip. 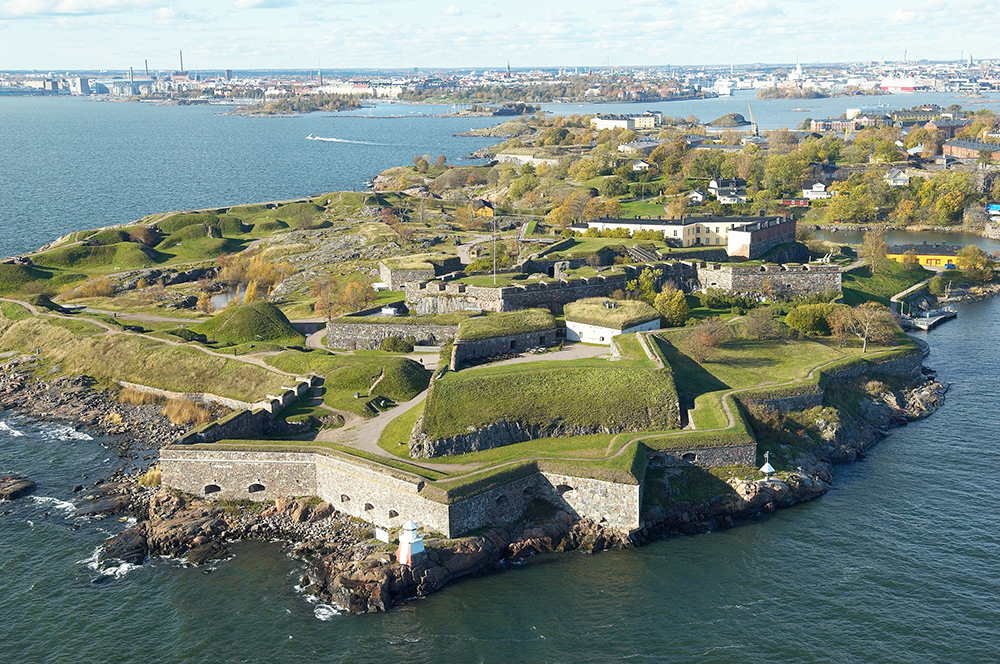 One of the almost mandatory activities for your trip to Helsinki comes in the form of a day trip to Suomenlinna. Located a 15-minute ferry ride from the harbour of downtown Helsinki, Suomenlinna is an 18th-century sea fortress and nature area spread across 6 linked islands. Great for a day trip, you can casually walk between the sites like the King’s Gate drawbridge, the Suomenlinna Museum, the restored 1930s Submarine Vesikko, and stop for a pint at the islands brewery, or some food at one of the several restaurants. Also, a great spot to bring your own lunch and pack a picnic!

Speaking of picnics, before catching the ferry to Suomenlinna, make sure you stop by Market Square, Helsinki. Grabs some fresh food to take across the water for a picnic, or grab some fresh and delicious foods for whenever. If the market isn’t open then walk about 4 minutes over to Story / Vanha Kauppahalli which has a lovely indoor market. 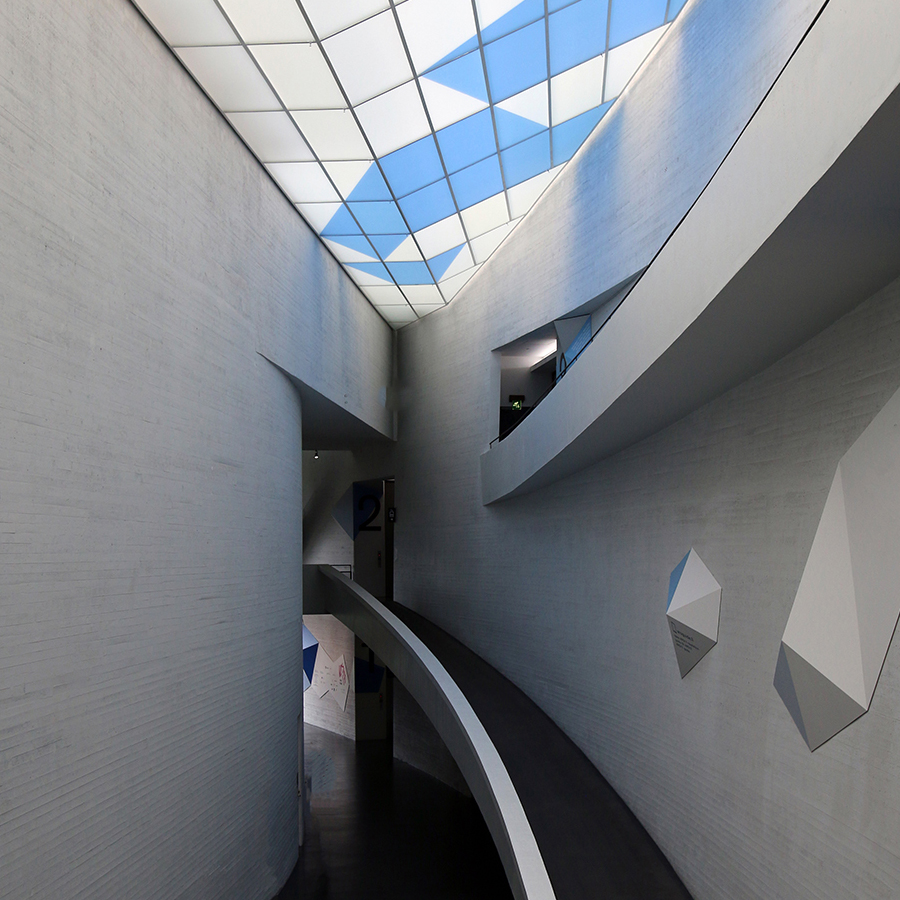 One of the nicest designed buildings we have been to in recent memory is Helsinki’s Kiasma contemporary art museum. Its name Kiasma, is Finnish for chiasma, to cross over, and alludes to the basic conceptual idea of its architect, Steven Holl. With twists and turns, spirals and large spaces, the Kiasma is a fun way to spend an afternoon. Walking from floor to floor admiring some of the most provocative art, or simply admiring the design over a cup of coffee at the cafe, this is a mandatory stop for you Helsinki adventure. Located in the heart of downtown on Mannerheimintie, you are never that far away from it.

If you are there in the summer, chances are there will be a music festival taking place. Although all the big festivals will feature all sorts of the top acts from around the world, you will probably get the opportunity to hear some amazing Finish bands who you wouldn’t otherwise ever encounter in your day-to-day music going lives. While there we hit up Sideways Music Festival which was a perfect balance of new discoveries and classic goodies. A Good Cup of Coffee

Apparently, the Finish drink more cups of coffee per capita than any other country in the world. The general folklore around this has Finn’s drinking on average 10 cups of coffee a day! That’s a lot of coffee to consume but it makes some sense since half the year is spent in 20 hours of darkness and the other half is spent in 20 hours of light. It is because of this that Helsinki has some of the best coffee shops in the world. We recommend stopping by Good Life Coffee, this is a good place to start, as their motto reads Avoid Bad Coffee. If it’s a nice day be sure to venture out to the Blue House Café (actually called Sinisen Huvila Kahvila), it’s a little bit of a walk but this quaint little coffee house provides beautiful views of Töölönlahti Bay, and Alvar Aalto’s Finlandia Hall (the national parliament building). One of our favourite spots to grab a coffee is a little flower shop turned cafe, Andante. Featuring delicious brews and excellent healthy treats. Located in the heart of the Helsinki Design District it is a must while wandering around. 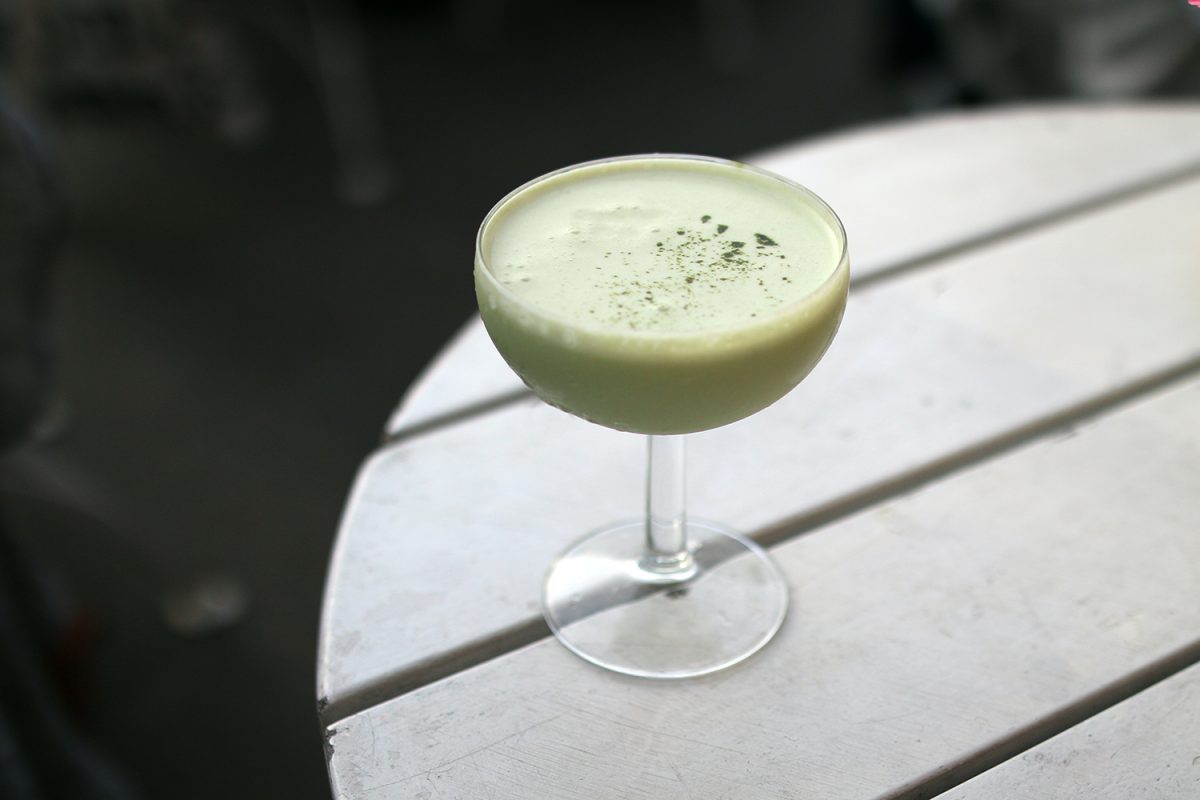 With an incredible burgeoning and world recognized restaurant scene being pushed forward by the Richard McCormick’s it’s almost a mission to NOT eat well in Helsinki. Be sure to get a spot on the terrace at Holiday, go for afternoon steam and drink at Löyly, make a reservation at the tiny restaurant SPIS (which has been acclaimed as the best Nordic restaurant in the world), and grab a nightcap at Liberty or Death. 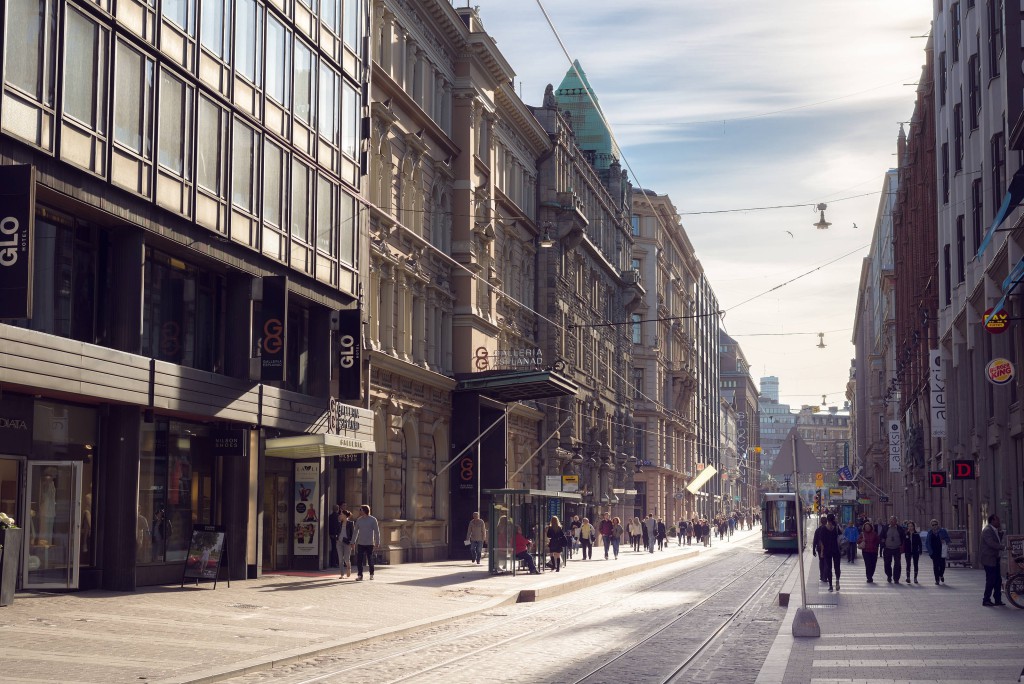 Not traditionally thought of for their shopping, Helsinki does a fantastic job competing with the best of European cities. As a European capital, you can find just about anything you may want, but the real treats come from the Finnish love of aesthetics. Make sure you visit the Stockmann department store, built in 1930, the landmark art nouveau building at the north end of Esplanade Park is Helsinki’s high-end shopping destination. The streets in and around the Esplanade are considered Helsinki’s Design District and encompasses the downtown core and several surrounding neighbourhoods. Make sure you visit shops like Artek,  Papershop, Costo, the Karhu Concept Store, and of course Marimekko. Started in the 1950s, Marimekko is a Finnish home furnishings, textiles, and fashion company based in Helsinki. Born out of a desire for colour and pattern in an otherwise cold and drab Communist area, Marimeko quickly became the pride of Finland as well as making important contributions to fashion and design for decades. With dozens of stores throughout the city and seven 7 factory outlets, there is no excuse NOT to grab something nice for your home or a gift for your family. We highly recommend making the thirty-minute trip to the brands head office, just outside the Helsinki city centre at Kirvesmiehenkatu 7, to shop their store and outlet as it is massive! There are more sauna’s in Finland than there are cars because most of the time it’s pretty cold, and we as humans want to be hot! Sauna-culture is like nothing you’ve experienced outside of Finland, unless you are friends with some Fin’s, as it is an essential part of life. People will get together and eat, drink, and sauna, while catching up on the days/weeks/months gossip. While you are never far away from a sauna we do recommend you hit up Löyly, as it is the epitome of modern elegance and culture, while still featuring people in their swim trunks.