Chatting with Amir Amor of Rudimental in New York 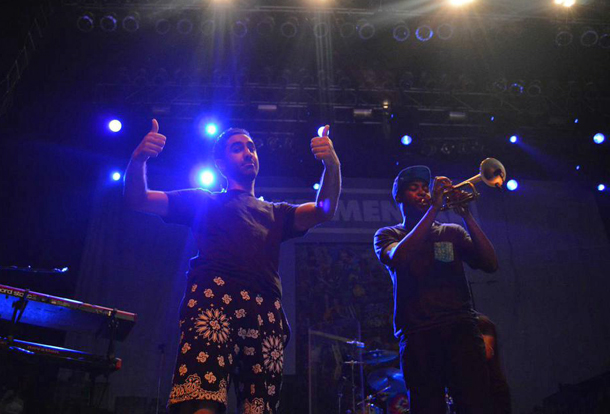 Last week we had the pleasure of sitting down with Rudimental’s Amir Amor before their show at Terminal 5. Read our Q&A with Amor below and head here to read our review of the show.

Sidewalk Hustle: We wanted to welcome you back to New York. The last time you were here might have been Tammany Hall, is that right? Terminal 5 is pretty big. Is there a change to the show because it’s New York. Can we expect any special guests?

Amir Amor: The last time we played I think in Brooklyn. Our show is almost like a medley anyway. There’s nine of us on stage so in terms of special guests, I think we’re pretty special. There are four people in Rudimental, as you know. We’ve got three singers: Anne Marie Nicholson, which we just signed to the label we just started called Major Toms Records, Thomas Jules, and Bridgette Amofah. We’ve got a drums and horns section. It’s an exciting experience for us. We don’t really change our show. New York is special for us because we get to play our whole show, the full set.

SH: Home was a pretty incredible album, packed with features. We heard that you’re almost done with the new one. How are things going and when can we expect to hear it?

AA: We’re playing a couple new songs tonight actually. It’s good and we’re nearly done. We’ve got a studio bus with us so we’ve been trying to finish it on the road. We got a nice tour bus with a drum kit and amps so we get to practice wherever we’re going because right now we’re supporting Ed Sheeran. It’s the best music we’ve ever made.

SH: So everyone’s pretty proud of the result?

AA: Definitely happy because at first it was us trying to learn how to work with each other. There was some chaos in there which made it all work because we’re all fucking stubborn people. When we’re in a room together, it’s anything but formulated. We all have roles that we fall into. I tend to finish stuff because that’s what I was doing before; I was a producer. We’ve tried to keep that the same. We’ve made sure that we don’t try to organize sessions with people. If things come through and we’re really into the person, then we’ll do it. We like to work with new singers and we have a couple of new voices on the record. It’s going good and I think it will be out in February.

SH: You mentioned you’re working on it on the road. Is it easier, do you get more inspired, or is it best to stay in one spot?

AA: It’s good to finish it in one spot but in terms of writing, it’s great to do it on the road because you get inspired by loads of different things. We’re lucky enough to play new songs the same night if we write something that we really like. We get to play it, test it out, then get back on the bus to finish it and take it to the next level. The difference between us and other electronic bands out there is that we’re actually a live band. The way we write our music is live.

SH: You’re on tour with Ed Sheeran and you wrote for his album, X. How is the touring experience with him?

AA: We’re having a great time. I’ve known Ed for a long time. We first met him when he was playing at a friend’s birthday party. It was when he had his first mixtape out and starting to build up a buzz so it’s been a long way coming. It’s really kind of him to invite us to come on the road with him. It’s a different experience for us to play to arenas full of kids who are fucking loud. The first ten rows are just screaming kids. It’s insane. We’re writing together. He was on the bus other night.

SH: Last year you were shortlisted for the Mercury Prize. We’re coming up on that time again. Do you have any predictions for this year? Any albums you think should be shortlisted?

AA: Oh, man! I don’t know really. I don’t think I can predict anything. The panel is quite unpredictable; it really depends on their whims. It depends if they want to go for a crowd pleaser or something alternative.

SH: Speaking of music, any favorite songs or albums this summer?

SH: You guys wear pretty sick gear. Do you have any favorite brands at the moment?

AA: I wear Dent De Man, which is the suit I wore for the BRIT Awards. It was this batik, paisley piece from Malaysia. I get to go there and pick the fabrics and get it cut the way I like. I love specific designs but I’m not too fast about whether it’s designer or not. I wear a lot of Aqua (AQ/AQ) t-shirts on stage. There’s a swimwear brand that’s really exciting called Auria which I really like.