Cars of the Future at the Canadian International AutoShow

The Canadian International AutoShow is taking place in Toronto from Feb. 14-23, and among the new vehicles coming this year, there are concept cars indicating what a future drive might look like.

Concept cars are a glimpse into what could be, but also what will be. Automakers design them to gauge both what’s possible and what will resonate with the public. In some ways, that’s how they’re positioning the concept cars at this year’s AutoShow. There aren’t many of them — four by our count — but they all have interesting ideas. 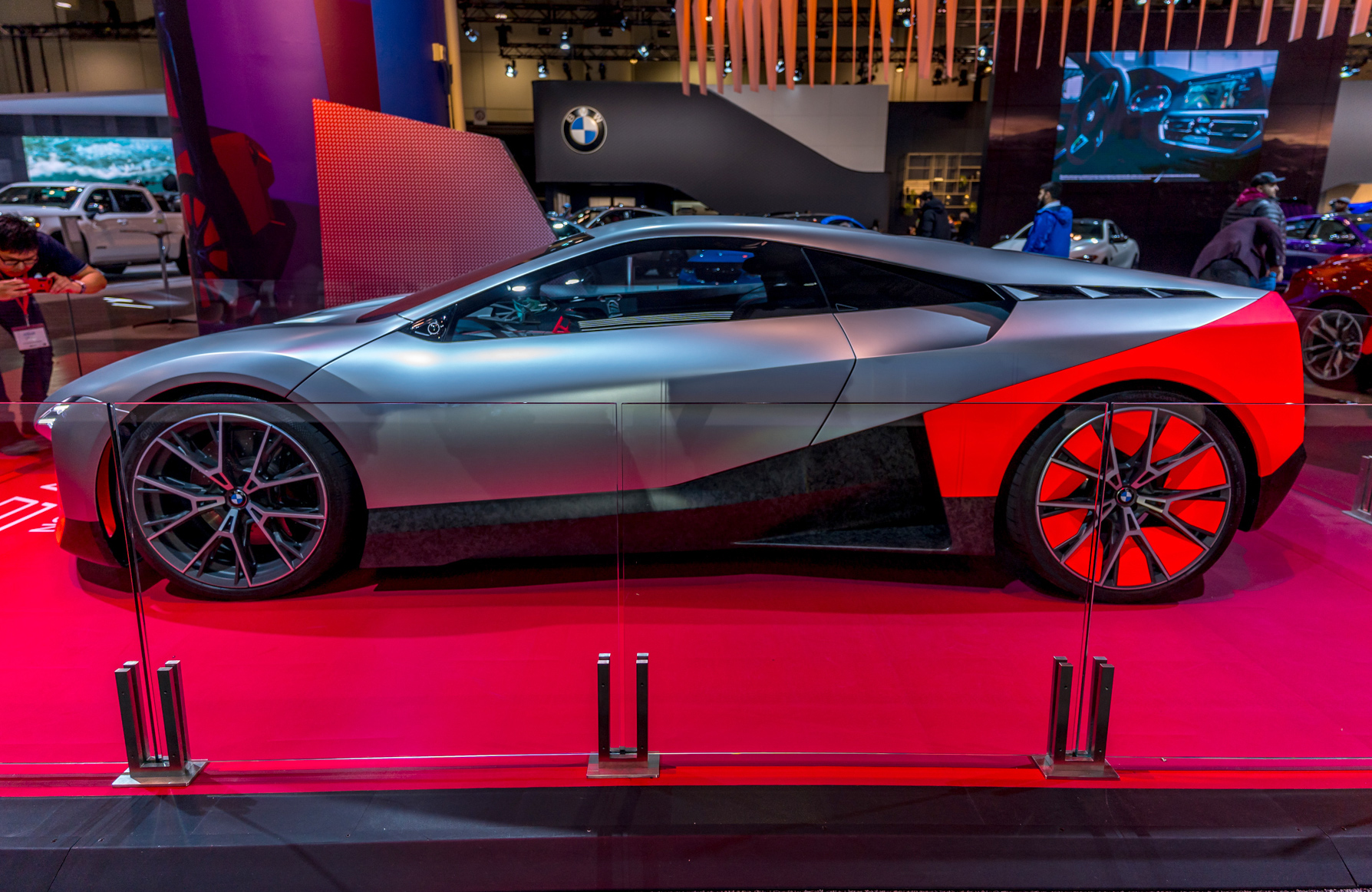 BMW doesn’t always show concept vehicles at the AutoShow, but when it does, it tends to be something worth seeing. The Vision M Next is a sports coupe that takes many of its design cues from the i8, a slick ride we’ve had the pleasure of driving before. This is a hybrid, so it has a gas-electric powertrain, rather than being an all-electric model.

It’s supposed to be very fast, with 600 horsepower and 0-100 km/h in only three seconds, reaching a top speed of 300 km/h. It’s not exactly nitrous oxide, but there is a “Boost+” button inside that can give the car exactly what the name implies. Electric driving range is up to 100 km, which is several times better than the i8 could ever manage.

We didn’t get to see the interior, but we do know that the wing doors open up through facial recognition when you approach the car. There’s an augmented reality (AR) heads-up display, a curved glass screen in the middle and unique steering wheel.

The exterior is a vibrant mix of colour that pops. The standard matte metallic finish is complemented by a louder orange. BMW calls it “Thrilling Orange,” and we tend to agree because it’s a standout look. No word yet on when it might hit the road, but here’s hoping it’s sooner than later. 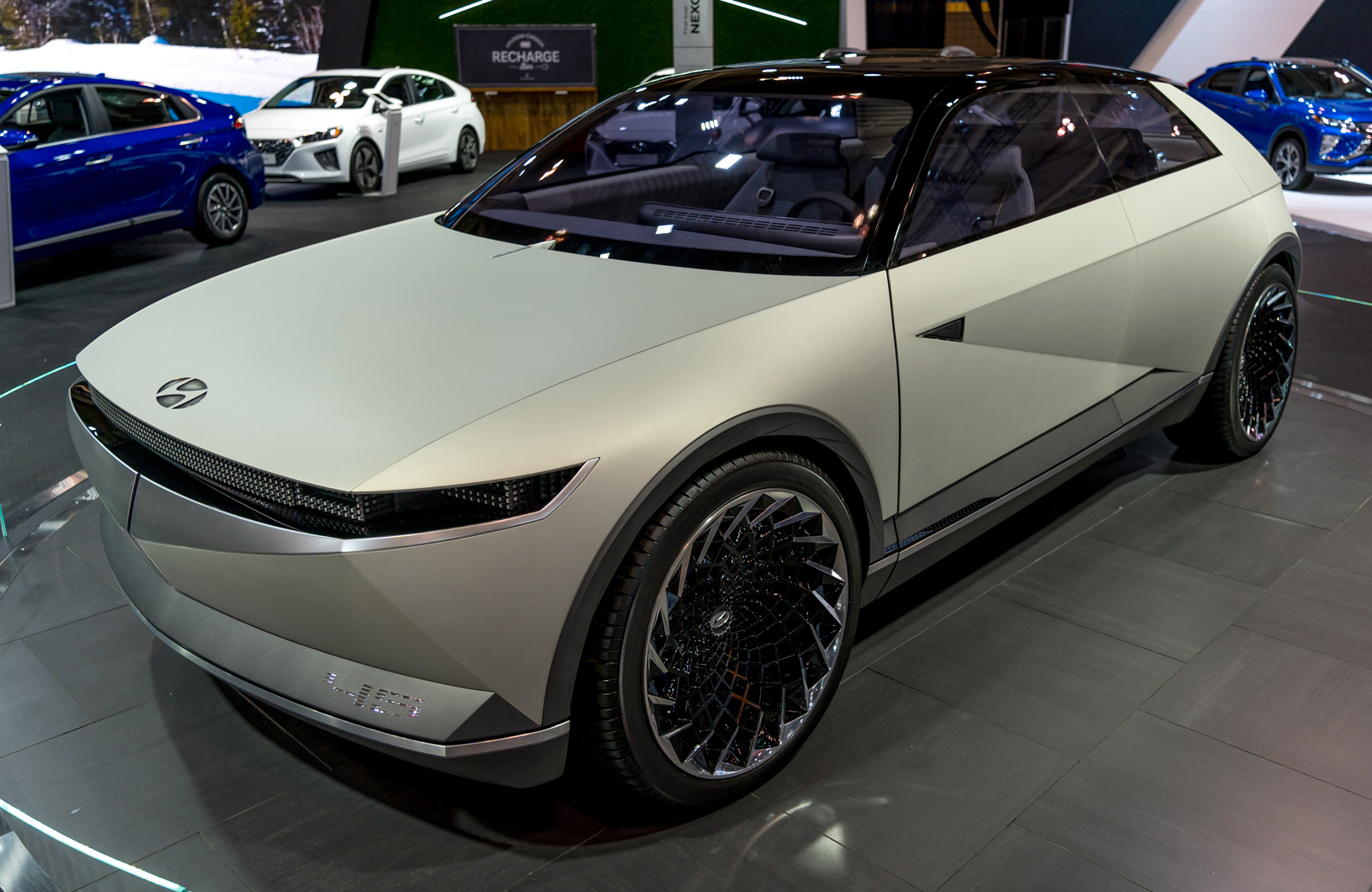 Looks like Tesla isn’t the only one going with a minimalist approach. The Hyundai 45 EV is an all-electric concept that harkens back to a vehicle the company came out with back in 1974: the Pony Coupe Concept. Hyundai initially unveiled this electric car in Sept. 2019, but more details are out about it now.

Hyundai calls this exterior design “Sensuous Sportiness” in that it combines the emotional value on the outside with the functionality of the interior. We didn’t get the chance to step inside, or even take a peek, but we did get some details on what this thing is all about.

The doors slide open in opposite directions, leaving the entire interior free to enter. There’s plenty of foot space, as a result, and because the batteries are lined up flat in what’s being called the “skateboard floor.” The hidden Camera Monitoring System (CMS) inside is meant for autonomous driving when features like that are available. Side cameras replace standard wing mirrors to see more in one’s blind spot through a turntable module that rotates the lens. Brushes along the edges also keep it clean.

The front and rear seats can rotate to face other passengers, and both in the front seats have access to the infotainment system from a projection-beam interface. No more tapping or swiping on screens. The whole thing feels like the future, but we may see a variant of this car as early as 2021. 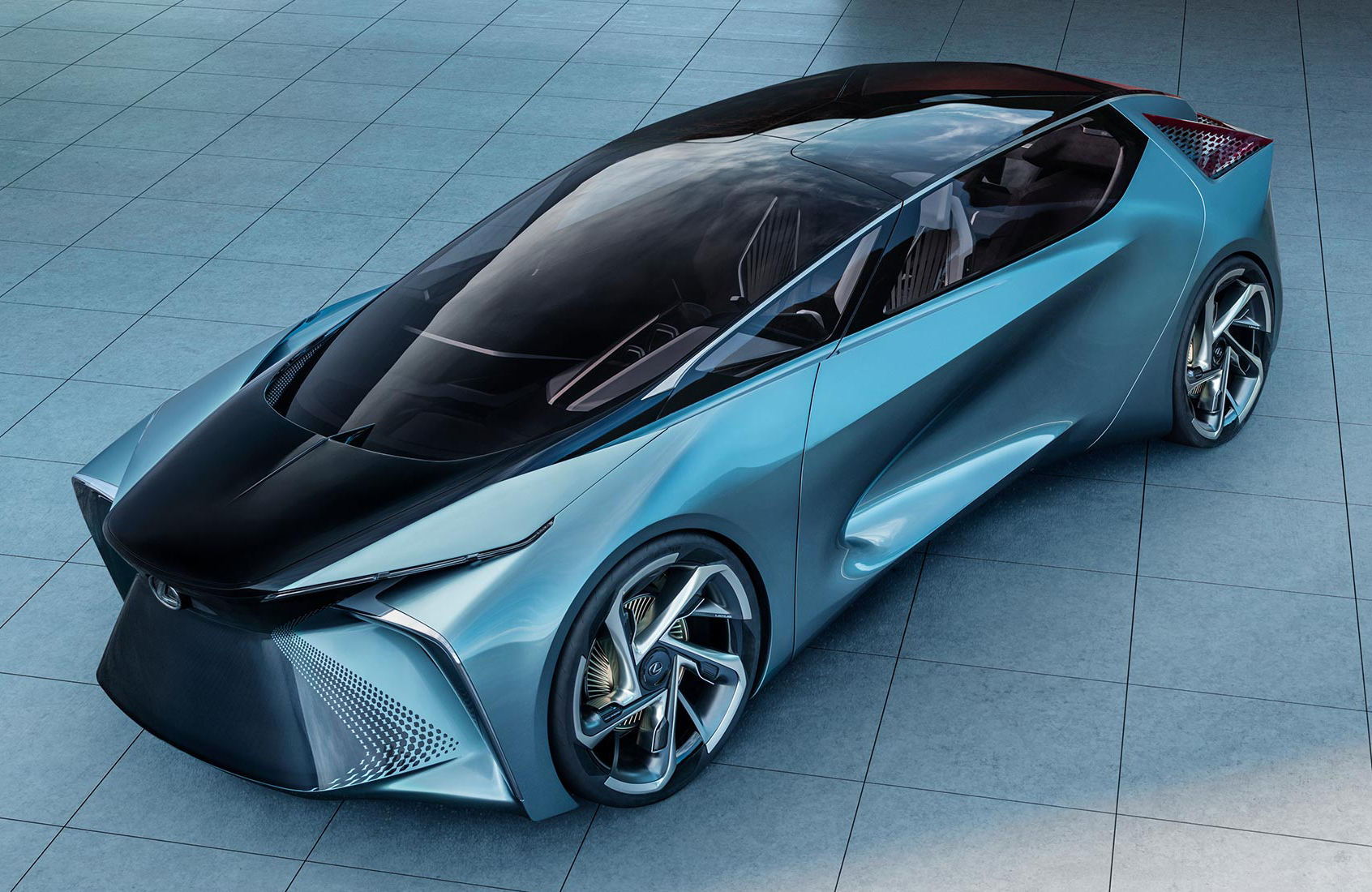 It’s a shame we weren’t able to get photos of the LF-30 ourselves because she is a beauty. In some ways, it looks like something out of a sci-fi movie, but the philosophy behind it is pretty striking. The windshield is like a long piece that extends over the whole roof and back of the vehicle. When the doors open like wings, they blend into the tinted glass, making it all look uniform.

On the inside, that glass roof is a touchscreen. The side windows have an adjustable tint to switch between gazing at scenery or increasing privacy. The cabin is devoid of physical buttons and controls, opting for a gesture-based system that utilizes AR to do what you want. Seats are highly contoured, yet look spacious and comfortable based on some photos we’ve seen. Unfortunately, we never could see for ourselves.

We also wouldn’t mind seeing this on a road somewhere. It has four in-wheel motors pushing 536 horsepower and can go 0-100 km/h in 3.8 seconds. Its top speed is 200 km/h, so not quite the roadster some other concepts are. What’s cool is that the wheel motors are adaptable, meaning you can switch to use all four, or only the front or rear ones.

Lexus wants to make this a fully autonomous car, but don’t look for it to be available anytime soon. Derivatives based on the LF-30 are expected in the next 3-5 years.