Cars Are Only Getting Smarter in 2023

As always happens now at CES in Las Vegas, shiny new cars steal some of the spotlight, and that was no different this year. The vehicles — and the technology driving them — looks to make a bigger impact in 2023 as the industry continues to proverbially drive towards greater electrification and driver autonomy.

The show had a lot of attendees but has yet to regain its pre-COVID flair for the dramatic in greater numbers. There weren’t as many automakers as before this time around, but that’s likely to change going forward, now that CES is practically part of the annual auto show circuit. So what stood out this time around? 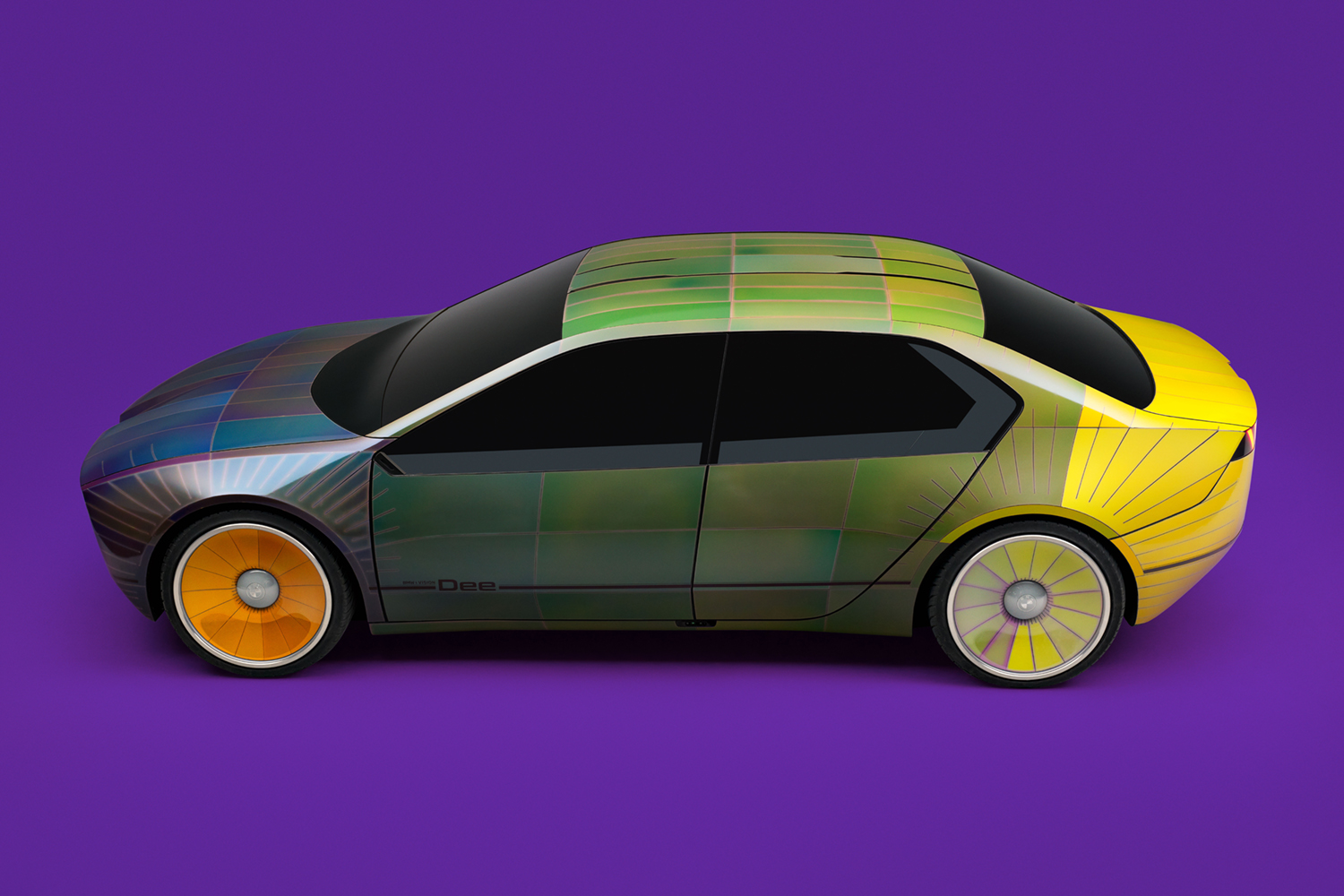 BMW previously unveiled a car that could change colour at any time, though it was limited to four monochrome shades. The i Vision Dee concept car can switch between 32 colours, giving the exterior a fresh look for every day of the month., if that’s your jam.

This car looks like a 3 Series with even smoother contours, almost like the body and windows form one seamless surface. The grille, headlights and rear lights get similar treatment — something BMW is actually calling “phygital”, a mashup of “physical” and “digital” together. Drivers can dim the windows on a whim, or see it done automatically based on how bright the sunlight is, or a windshield that displays augmented reality (AR) elements. There are fewer mechanical components in the cabin, too, like the lack of door handles and physical buttons, for instance.

The real head-turner is how the body changes colour on the outside. This is an extension of the iX Flow concept that was stuck in monochrome. BMW made the panels with E Ink, the technology used in eReaders’ screens. While that gives the car a duller “paint job,” it also means you can change colours and set patterns on the fly. Imagine cruising down a busy street, and your car is alternating in a pattern between red and blue. It’s definitely flashy in its own right, and I can see how such technology could be used to personalize a ride even further. Advertising might also play a role here, letting companies pay regular or rideshare drivers to run ads that roll through the car’s body.

BMW is only showing all this as a concept, but it believes that some of this tech could make it in production cars as early as 2025. We’ll have to wait and see, but i Vision Dee will be one of the coolest tech products shown in 2023. 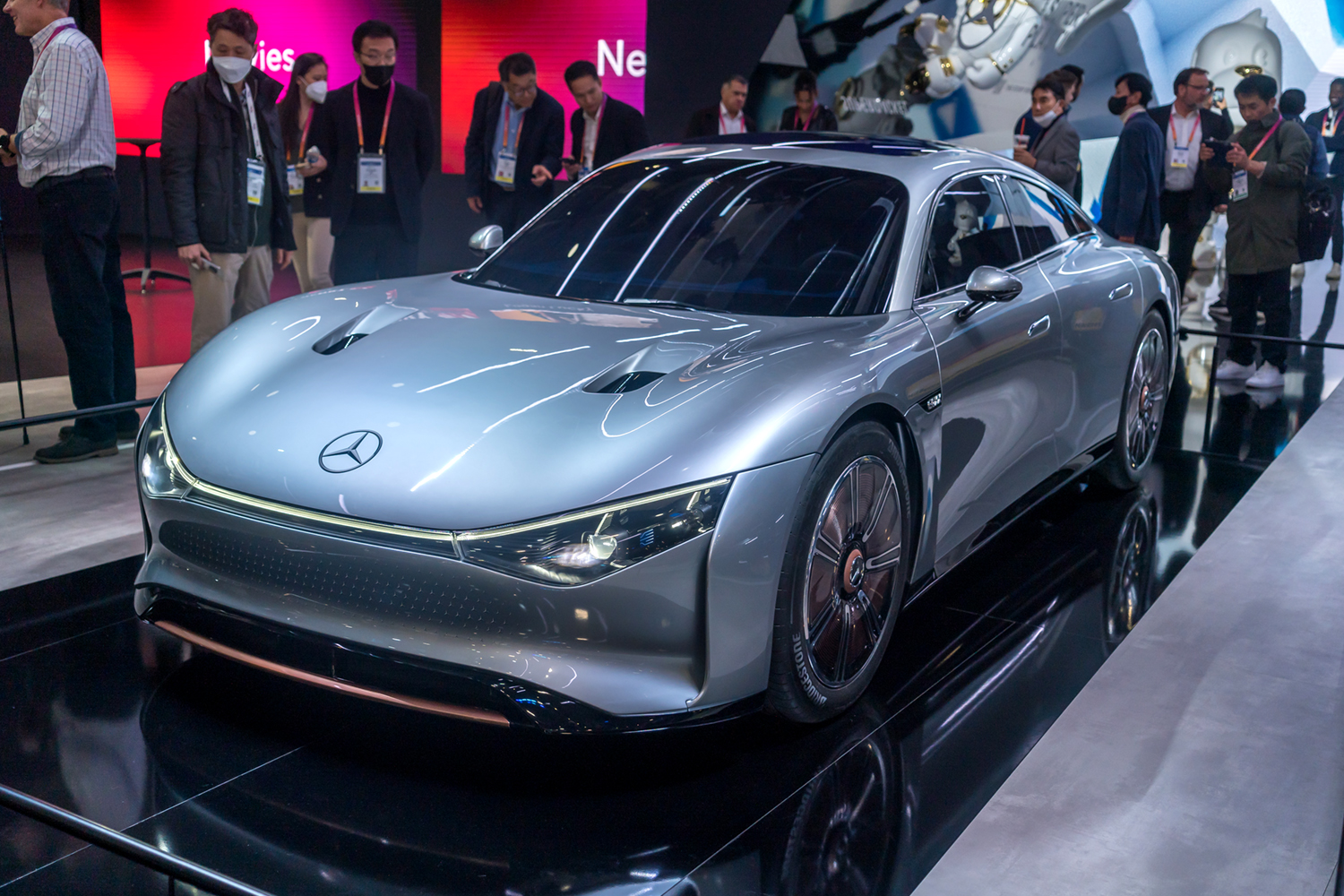 A Mercedes that goes further than anything

Would you take a car that could drive up to 1,000 km before it needs to recharge? I know I would. Mercedes-Benz claims it hit up to 1,200 km on a single charge with the Vision EQXX, a concept sports car, driving it from Stuttgart, Germany to Silverstone in the U.K. at only 8.3 kilowatt hours per 100 kilometres. That’s ridiculous even by current standards, considering a Tesla Model 3 averages roughly 16 kWh per 100 km.

Granted, that’s comparing different levels of luxury, but you get the picture. This car has a range that smokes even combustion and diesel engine vehicles at their best. You could drive this from Berlin to Paris, Toronto to New York, Montreal to Boston, or Vancouver to Calgary on one charge. How is that possible?

The German automaker is mum on a lot of details. We know there are 117 solar panels on the car, but they’re only good for adding about 24 km of range on a sunny day. It is a single electric motor with a battery capacity of about 100 kWh, so the greater efficiency on hand here is a good sign for what may be coming in the industry in the years to come.

I didn’t get to see the inside, but there is a massive 47.5-inch display running across the dash with 8K resolution and “video game-level” graphics. It’s not clear when the Vision EQXX will be available, but I’ve seen prices starting at €110,000 to start, so about $160,000 CAD or $119,000 USD whenever it starts coming off the assembly line. The Dodge RAM officially has an all-electric pickup in its midst. Stellantis rolled out the “Revolution” at CES 2023 in the form of an electric RAM 1500 Revolution, a concept pickup ready for all roads in 2024. It took a while for Dodge to get on the EV track, given there are already electric models for the Ford F-150 and Chevrolet Silverado EV, not to mention the Tesla Cybertruck is supposed to be coming, too.

There’s a lot of tech in it to make it drive and feel futuristic, right down to a built-in projector for those outdoor movie nights. The weirdest one might be “Shadow mode,” where the truck literally follows the driver as they walk and verbally command it. No, it won’t start speeding or anything — it’s just meant to inch along at a slow pace. The LEDs at the front look like a cross between Knight Rider and Transformers.

RAM may generally not be quite as popular as the other pickups, but this looks to be an impressive debut for RAM in the electrification age, as the brand rolls toward its own stated goal to go all in on EVs by 2030. 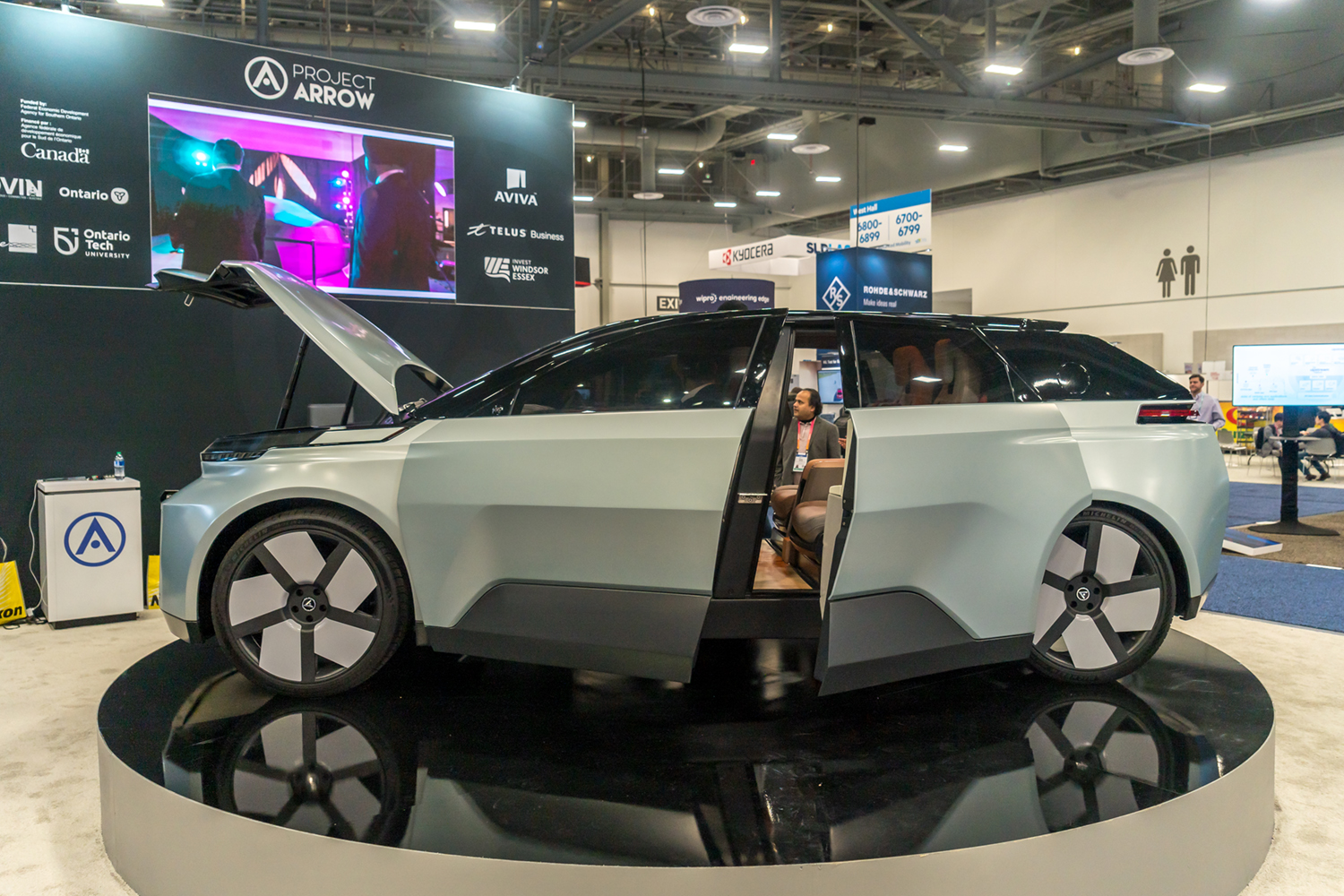 A ‘Made in Canada’ experiment

It’s been a long time since we’ve seen a car designed and developed entirely in Canada. Such is life when next to one of the largest automobile manufacturing countries in the world, but Project Arrow is a real thing. The Automotive Parts Manufacturers’ Association (APMA) first announced the vehicle at CES 2020, only now actually has a finished concept to show off.

The vehicle is an all-electric Level 3 autonomous SUV, built in a collaboration with 50 different Canadian companies and suppliers. It included over $8 million in support from the federal government, as well as the Ontario and Quebec governments chipping in to help. The idea is to build on Canada’s rich resources in both technical know-how and mineral resources to develop a nascent automotive industry making homegrown EVs. Plans are to bring the vehicle to the Canadian International Auto Show and then to other automakers to showcase what the various companies and suppliers can do for them.

There’s a lot of tech in it, including a solar panel roof, an advanced infotainment system and improved autonomy when the car takes over driving. The Ryse Recon is an eVTOL (electric take-off and landing vehicle) that actually flew at CES. Unfortunately, I missed the few demonstrations showing that happen, but I’m familiar enough with the vehicle that I can tell you what it’s about. This is neither an air taxi nor an aerial cargo vehicle, but rather a single-seater aircraft that could have implications for agriculture, and potentially, delivery services. 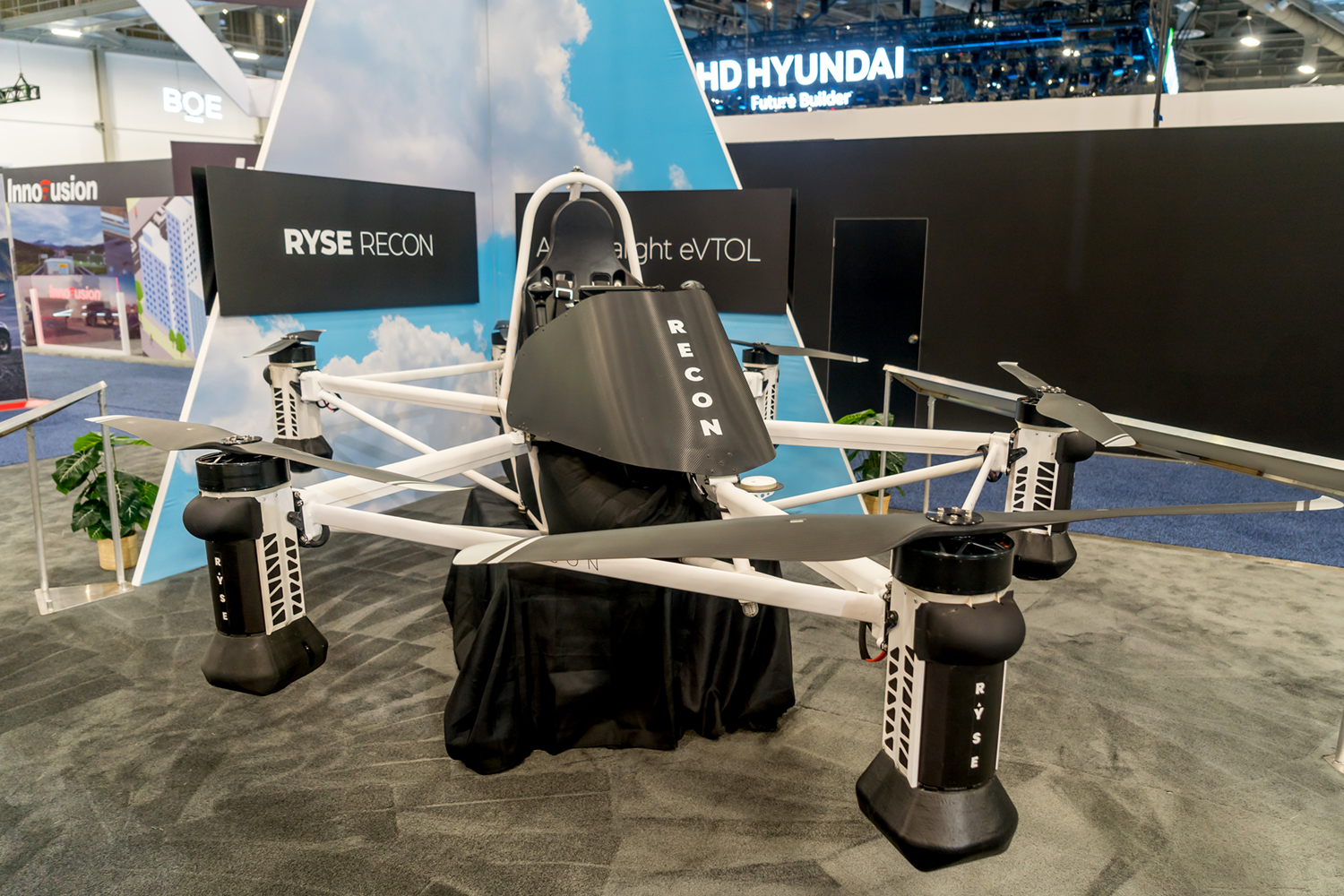 Under current FAA rules, the Recon doesn’t require any certification or a pilot’s licence to fly. It’s an all-electric aerial vehicle that runs on six battery-powered propellers capable of hitting a top speed of 100 km/h. Altitude is limited to 400 feet, so it won’t interfere with planes or helicopters, and only in the daytime with good visibility. As for transporting anything, its payload is only 255 pounds, pilot included. Flight time is also low at just 25 minutes per charge. Not sure how this might fly (literally) in Canada under Transport Ministry laws, but you can try pre-ordering one now for $150,000 USD.

Aska took this premise even more seriously by announcing a flying car. Yes, a flying car. I use the term “car” loosely here because it does have four wheels on the ground capable of driving it around, but you’d want this in the air as an eVTOL, where two of its arms draw in to give it wings. The Aska A5 can seat four people, so it presents itself as something that can ferry people around. Not bad, considering it can go for up to 400 km on a single charge. It won’t come cheap at $789,000 USD, but you may be able to get one if you can plunk down that kind of cash. 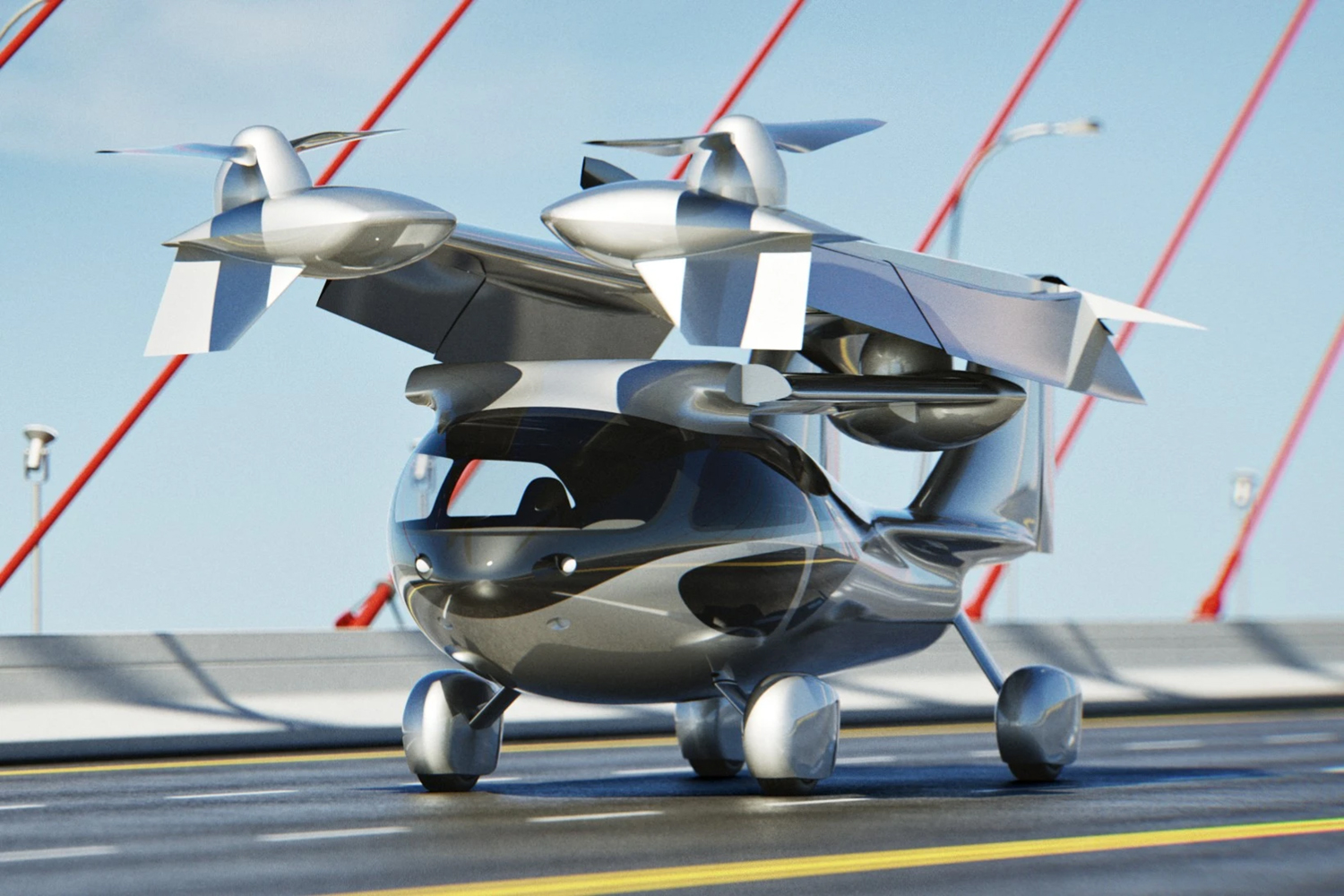 Hyundai is committing to building an eVTOL that will begin test flights in 2023. There was no prototype but there was an announcement that Uber would partner up with it to create Uber Air, an aerial taxi service. The plan is to make the vehicle capable of flying up to 100 km in distance with speeds reaching 290 km/h. Uber also wants it to fully recharge in as little as five minutes. A whole infrastructure will be necessary to support such a vehicle and service, but big money is behind it, so we’ll have to see where it lands (no pun intended).

SkyDrive out of Japan is looking to do the same with its single-seat SD-03 eVTOL, which it says is already flight-worthy and ready to go. A new design is reportedly in the works that will seek approval from Japanese regulators in 2025 for public use.

The brains of a car

You can expect to see a whole range of new cars in 2023, but it’s the underlying technologies that will tell bigger stories in the longer term. CES is always full of that kind of tech, much of it still under development, continuing to show the evolution of an entire industry towards electrification and autonomy.