It’s been just over a year since Apple announced their take on the smart speaker with the appropriately named HomePod. Having hit the market in the US, the United Kingdom, and Australia back in February, HomePod is now available in Canada, France, and Germany as of today. But why should you care? Well, don’t stress that’s why we are here.

Although late to the market, Apple used the time wisely, applying the usual care of aesthetic design and technical functionality to the HomePod. Designed with the intention of being more than a speaker and grocery list making device but to actually be a useful home assistant. This does mean you will need to get comfortable talking to Apple’s Siri (although to be fair if you don’t want to you can use your phone or the device itself to control your music) to get the most out of your experience. At this point why wouldn’t you, if you committed yourself to buy the device.

Whatever your feelings are on this, Apple HomePod is designed to work best when verbalizing commends and using Siri. HomePod features six multi-directional built-in microphones that patiently wait for you to say the magic words “Hey Siri” before jumping into action. Designed to be best used in conjunction with the Apple Music streaming service (obviously) you don’t need to yell over your fat tunes to tell Siri to change the music or take a note, you can simply speak in your normal sub-music level voice and Siri does it. Sounds almost crazy, until you actually do it and realize you are on some next level ish. 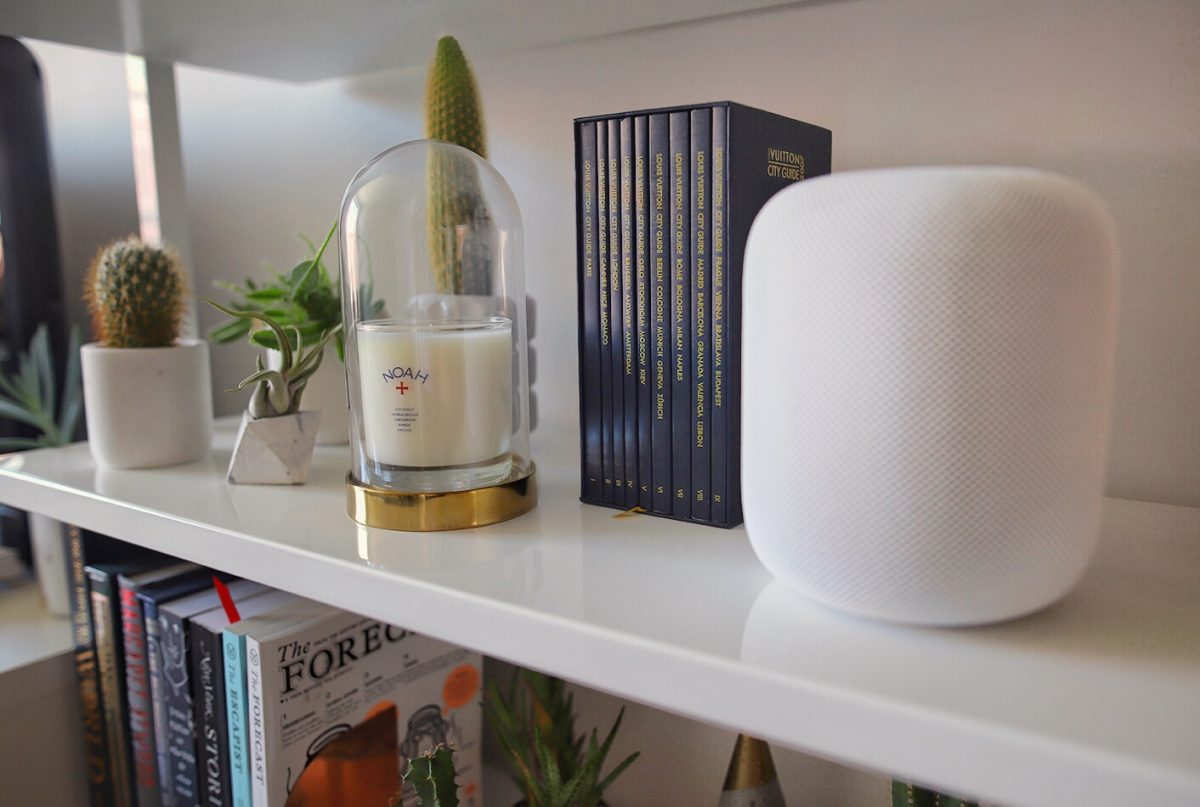 Okay, but how is the HomePod doing that?  Chalk full of new tech designed to give you the ultimate home assistant and music experience, you know a powerful woofer, a unique array of seven beamforming tweeters, an Apple-designed A8 chip and more. But the coolest part is that you can place HomePod anywhere in the room and it automatically analyzes the acoustics, then adjusts the sound based on the speaker’s location, and separates the music into direct and ambient sound.  Direct sound is beamed to the middle of the room, while the ambient sound is diffused into left and right channels and bounced off the wall. So your music sounds amazing, wherever you are in the room. Sort of like musical sonar.

If you get a second HomePod you can put it in the same room and they will both automatically detect and balance each other. In anticipation of today’s release, Apple recently sent out an iOS update that allows existing devices to utilize the new AirPlay 2 feature. AirPlay 2 acts as the main channel of communication between multiple HomePods. With advanced beamforming capabilities, a HomePod pair is able to create a wider, more immersive soundstage than a traditional stereo pair.

Apple HomePod is officially out in Canada today from Apple.ca.