The 2019 Global Games Market Report outlines the numbers, trends and key players in the global games market. The market is expected to generate revenues of $152.1 billion, seeing a +9.6% year-on-year increase. Mobile gaming (via smartphone and tablet) continues to be the biggest segment, bringing in revenues of $68.5 billion (45% of the global games market). Smartphone games will generate $54.9 billion and $13.6 billion will come from tablet gaming. Downloaded/boxed PC games will generate $32.2 billion in 2019. The report was compiled by Newzoo, the leading global provider of games and esports analytics. 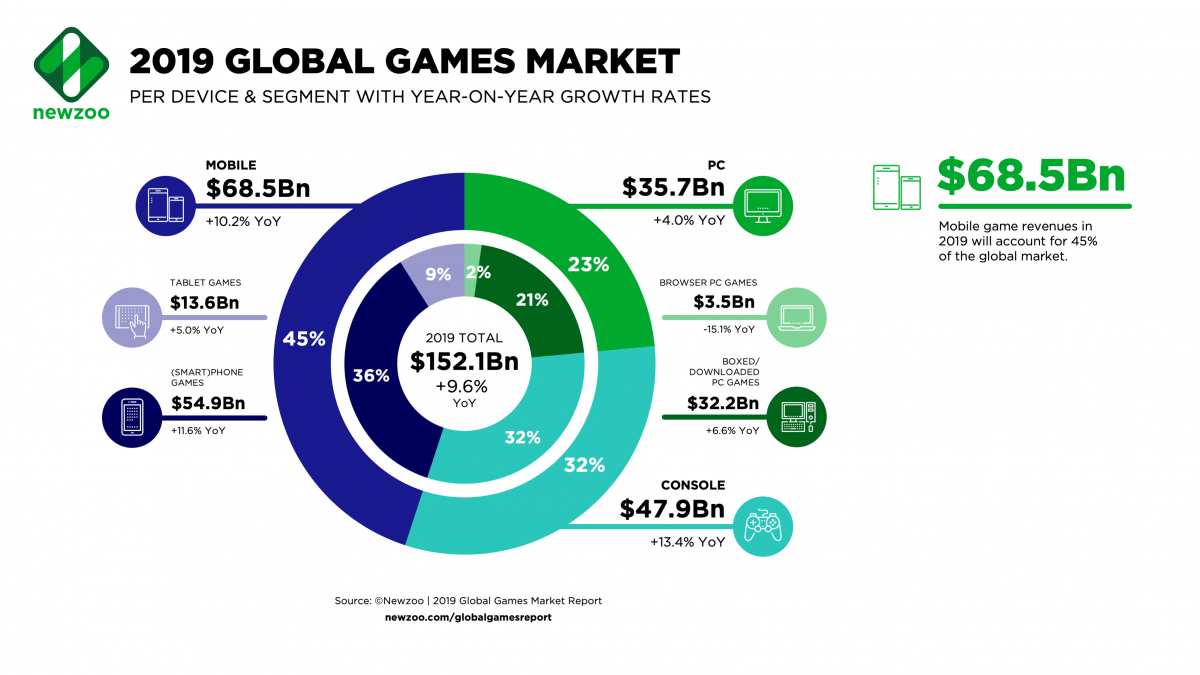 Looking ahead to 2022, the report notes the global games market is expected to grow its revenues to $196.0 billion. The Asia-Pacific region remains in the top spot, generating $72.2 billion in 2019 (up +7.6% year on year) and making up 47% of the total global game revenues. 48% of all consumer spending for games this year will be seen out of the U.S. and China. North America is the second biggest region (by game revenues), bringing in 26% of 2019’s total global games market with $39.6 billion. 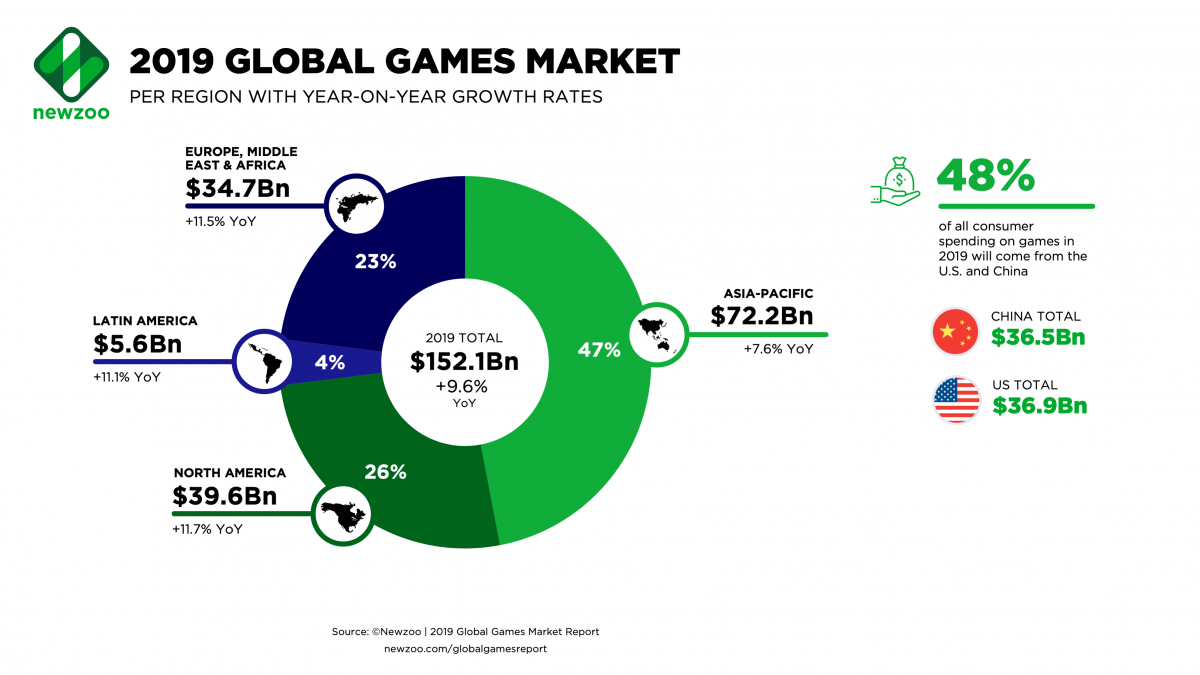 The love for nostalgia drives remakes and re-releasing of retro content, and the report suggests the trend is moving away from remastering, instead noticing it’s about “from-the-ground-up remakes, released at premium price points” than what had been seen in previous years. Both Spyro the Dragon and Crash Bandicoot are games that have capitalized on this formula. And Final Fantasy VII  Remake (out March 3, 2020 on Playstation 4) as well as Crash Team Racing Nitro-Fueled (out June 21 on PS4) are among the anticipated games that build off this sentimentality.

Tapping into the nostalgia gets publishers the chance to further monetize—it is less time-consuming and more cost-effective than designing an entirely new title. Since there is already a foundation (i.e. a story, character design, level layout), it “provides another way for companies to produce stable revenue alongside games-as-service offerings,” according to Newzoo.

Newzoo also outlines the different personas of players, indicating that the broad classifications of “casual gamers” and “hardcore gamers” fail to highlight all types. These personas “encompass all aspects of consumer engagement with games: playing, viewing, and owning,” reads the report. The personas are not to be overlapped.

“Gaming is in my DNA…I spend my free time and money on games.”

“I am interested in all forms of gaming, from playing to watching and everything in between.”

“I do not watch other people games much. I own plenty of hardware, so I would rather be playing myself.”

“I am always following the latest hardware news and trends. I want an optimized experience.”

“Playing video games may not be my favorite hobby, but I definitely enjoy watching others play.”

“I used to game a lot. Whenever I watch a big esports even and watch others playing games, that passion is reignited.”

“I only game when I have time to spare or at social events. Mobile games are my go-to.”

The top 20 public game companies are as follows:

The report also provides findings about unlikely partnerships such as that seen between Microsoft and Sony, with both working together on their cloud gaming content. Sony’s cloud gaming platform will be powered by Microsoft’s Azure; the two companies have come together to take on Google’s Stadia. Other contenders in the cloud provider space include IBM and Alibaba Cloud. Also, Samsung partnered with Hatch to launch a 5G-powered game streaming service in the U.S.

Instant game platforms are rising in popularity. China has WeChat mini games from Tencent. As for the Western-focused platforms, Facebook’s Instant Games is said to have “great potential” and Tik Tok is also beginning to introduce instant games that have a heavy reliance on social media.

“Facebook Instant Games hints at the company’s plans to leverage its massive user base to stake a claim of the $152.1 billion global games market,” highlights the report. And the most popular and top-grossing titles are Words With Friends, Draw Something, 8 Ball Pool, Quiz Planet, and Uno.

Newzoo also highlights mini programs, which were first introduced to Chinese smartphone users at the end of 2017. These programs have been integrated into everyday lives, and unlike app stores where the most popular apps get the most dollars, the vast distribution of mini programs can reach new users.

“Notably, the most efficient way to acquire users is through group chat where people share and recommend mini programs to friends,” reads the report. “This shows mini programs’ heavy dependence on social networks.” 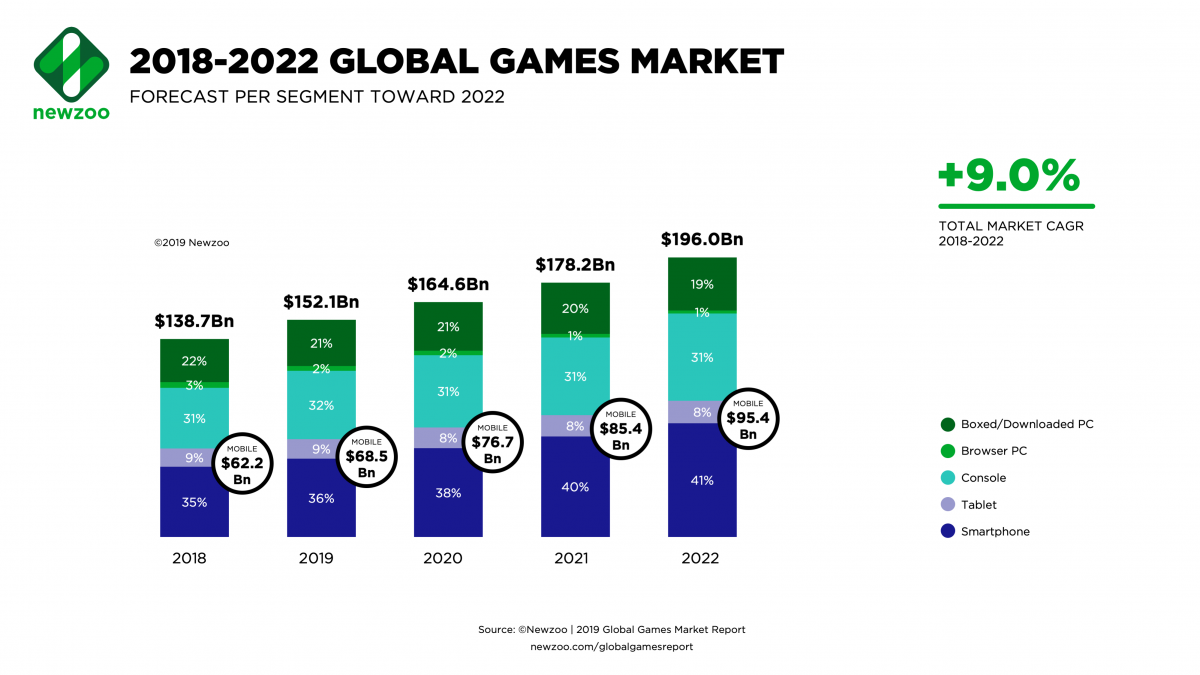 Google’s Stadia is perhaps the most recognizable new addition to the cloud gaming ecosystem. This move is following a trend where any game can be played regardless of the device, and Google is leveraging YouTube’s popularity. Users will be able to directly share to the video-streaming platform plus have the ability to join streamers’ games. And of course Google will create Stadia-exclusive content.

Other cloud gaming operations can be seen with Microsoft (Project xCloud) and Sony’s PlayStation Now platform which has over 700, 000 users, according to the report.

When it comes to hardware the trend is with retro consoles. Nintendo lead the charge with the release of the NES Classic Edition in November 2016. The Classic Edition was then released in 2017 following the initial NES success. Playstation Classic (2018), Sega Genesis Mini (September 2019), and Capcom Home Arcade are among the other key players. But, Newzoo’s report suggests that these retro consoles are already fading in appeal.

“Since modern consoles often come with backward compatibility, we expect the market for hardware re-releases to be limited and for retro and nostalgic software re-releases and remakes to have more of a role to play in the games market going forward.”