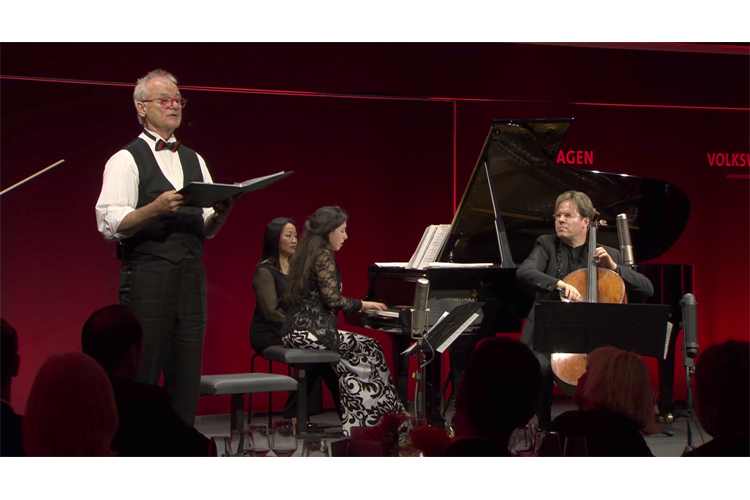 One time in the sky, the ever hilarious living legend Bill Murray was on a flight from Berlin to New York and he met the cellist Jan Vogler. The two quickly became amigos and decided they should collaborate together. That collaboration is now due out this September and is titled New Worlds. The project features Vogler playing chamber music, leading a trio alongside Mira Wang (violin) and Vanessa Perez (piano) with Murray performing standards and literary readings – singing Gershwin and West Side Story selects and reading the likes of Whitman, Hemingway, and Twain. We can’t wait.

New Worlds will premiere live on June 4 at the Dresden Music Festival in Germany. The show will later come to Toronto’s Koerner Hall October 12 and then hit New York City’s Carnegie Hall on October 16 with a world tour confirmed that’s said to continue into next year.

Watch a trailer for New Worlds above. Check out the tracklist and tour dates below.

Tracklisting (Unsequenced)
Johann Sebastian Bach — “Prelude” from “Cello Suite No. 1 in G Major, BWV 1007″
Walt Whitman From “Song of the Open Road” and “Song of Myself”
Stephen Foster “Jeanie with the Light Brown Hair”
Ernest Hemingway “With Pascin at the Dome” from A Moveable Feast
Astor Piazzola — “La Muerte del Angel”
George Gershwin “It Ain’t Necessarily So” from Porgy & Bess
Astor Piazzolla — “Oblivion”
James Fenimore Cooper from The Deerslayer
Maurice Ravel “Blues” from “Sonata for violin and piano No. 2″
James Thurber — “If Grant Had Been Drinking at Appomattox” from Writings And Drawings (The Library of America)
Henry Mancini Arr. Grafe 5 “Moon River”
Mark Twain from Adventures of Huckleberry Finn (excerpt)
Leonard Bernstein Arr. Stephen Buck “Somewhere,” “I Feel Pretty” and “America” from West Side Story