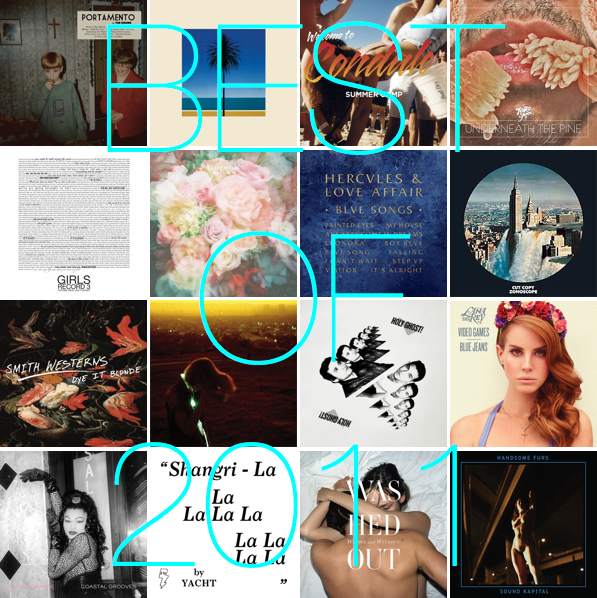 Yet another year is about to pass us by and this years musical best were a hard bunch to spot and many many fantastic albums were left out of this list, because basically they failed to remain in constant rotation on my various musical listening devises.

We interviewed The Drums this year after dancing uncontrollably with Johnny Pierce at Coachella, and their second album, Portamento, really resonated with me musically, so it takes the cake (buttercream icing and all), sitting majestically at the top of my list, second only to the rather contagious record released by Metronomy earlier this year called The English Riviera.

Newbies Craft Spells, Holy Ghost!, and Summer Camp’s debut albums are scattered throughout the list due to their impressive catchiness, while everyone’s favourite sophomore releases by Hercules & Love Affair, Neon Indian, Smith Westerns, and Toro Y Moi made the cut. And speaking of cut, who didn’t get down once or twice to a Cut Copy track off Zonoscope this year, I mean, remember them at Coachella?

I took the liberty of listing a few honourable mentions as well, because to be honest I had trouble ranking and fitting them into my top ten. Particularly Blood Orange’s debut Coastal Grooves, YACHT’s Shangri-La, and Blouse’s self titled debut were hard to place, but are equally awesome enough to tie with any record on the top ten. As well you’ll see the obligatory mention of wonder gal Lana Del Rey’s EP and a few super amazing Canadian gems sitting pretty below.

I have so much musical love to give, and found it hard to get through everyday in 2011 without uttering “I Fucking Love that song” or “Have you heard of ________? They’re sooo amazing” about many of the artists below, so I’ve crafted this set of lists, which also double as a musical gift guide for all you list minute shoppers out there. Happy listening all.