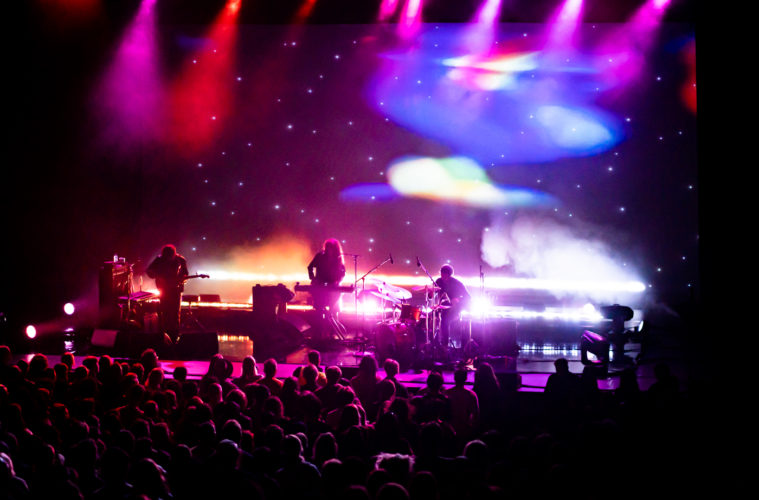 Victoria Legrand and Alex Scally, better known as the musical duo “Beach House”, made their way to Vancouver’s Queen Elizabeth Theater on April 5th for a beautiful evening of music. The Baltimore dream-pop band brought their unique and infectious brand of ambient shoegaze to the lower mainland for a much-needed cathartic jam fest.

During the previous two years, the eerily optimistic tunes became the innocuous soundtrack of our lives, electronic melodies knotted with psychedelic beats, and Legrand’s hauntingly captivating voice. The moody vulnerability, introspection, and sublevel anxiety, somehow becoming synonymous with the overall zeitgeist of the recent pandemic era.

Beach House’s performance on April 5th felt like a legal out-of-body experience. The limited lighting that created ominous silhouettes of the band, combined with the enchanting music conjured on stage, created a compelling aura of mysticism throughout the theatre. At times the crowd acted as if hypnotized swaying back and forth in a most soulful way.

The setlist for the night contained many fan favourites such as “Space Song” (which was featured on FX Network’s hit TV series Atlanta), “Once, Twice, Melody”, “Lazuli” and “Lemon Glow”. The band’s performance of “Lemon Glow” towards the end of the night, in particular, was a crowd favourite. The powerful drumming and addictive opening beats of this song temporarily reinvigorated the Vancouver crowd from their trance-like disposition, which was shown in the more active body language. In my opinion, this was a powerful way to cap the performance.

Take a look at some of the appropriately moody pictures from the show below.