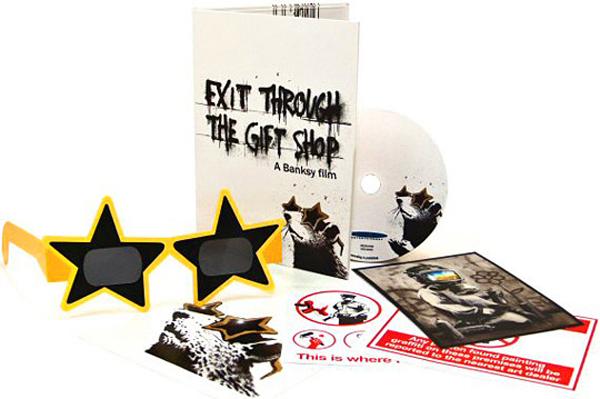 Oh Banksy, how come I feel like we lost you to capitalism? Oh well, that’s life it seems. Banksy’s film “Exit Through The Gift Shop” is coming to DVD and Blu-ray next week. Included on the DVD are a series of deleted scenes, two new short films and comes packaged with exclusive 2D glasses, stickers and artwork. The film will be released on September 6, 2010 but you can pre-order your copy now through Amazon UK.

This is what it says on the back cover.

Featuring exclusive footage of Banksy, Shepard Fairey, Invader and many more of the world’s most infamous graffiti artists at work, Exit Through The Gift Shop is the hilarious true story of low-level criminality, companionship and incompetence. The story of how one man set out to film the un-filmable. And failed.