Apple Shares the Future of the iPhone + Apple Watch Series 4

Apple CEO Tim Cook made some big announcements yesterday during the September product unveil, introducing the iPhone XS, the iPhone XS Max and the iPhone XR as well as the Series 4 Apple Watch. All three phones have edge-to-edge screen display and an A12 Bionic chip. The phones also allow you to have two numbers on them thanks to the dual SIM capabilities (SIM and e-SIM), which Apple has never done before. There are no fingerprint sensors, instead, everything is identified through Face ID and all three new phones will run on iOS 12.

Apple CEO Tim Cook said the devices are “by far the most advanced iPhone we have ever created.”

More on the goods below.

The 5.8-inch Super Retina screen comes with custom OLED design to enhance colour definition. The phone is splash/water-resistant (new water resistance of IP68) up to two metres, lasting for up to 30 minutes. You can store up to 512 GB, there’s 30 minutes extra of battery life, and it features a dual-camera system—12-megapixel camera to be exact—providing “bigger, deeper pixels” for better captures. This is the highest quality display the company has released. Featuring the first 7-nanometre chip in a smartphone, the A12 Bionic chip comes with 8-core Neural Engine and Apple states the chip will make the processor 15% faster than the previous A11 chip found in the iPhone X.

The iPhone XS Max is a 6.5-inch Super Retina OLED screen and is the company’s biggest and priciest handset to date, also coming with the biggest battery ever used in an Apple phone. Phil Schiller, Apple’s head of global marketing, said the battery will last an hour and a half longer. It also comes with a dual 12-megapixel camera system and a 7-megapixel front-facing camera perfect for Face ID. Video capture is at the 4K speed and storage is up to 512GB.

Cool too is that you can take a photo in portrait mode and then when you go to edit there is a new slider at the bottom that shows ‘depth’ and you can edit both the background and the depth of the field at once.

The iPhone XS and XS Max are available for preorder on Friday, September 14. They will be available in stores on September 21.

Both the iPhone XS and XS Max are available in silver, gold and space grey.

The phone has a 6.1-inch LCD display (edge-to-edge) with an aluminum and glass enclosure and it has IP67 protection from liquids and dust. It is available in yellow, blue, black, coral, white and red. It also has the A12 Bionic chip with next-generation Neural Engine, but the iPhone XR has a single rear camera (unlike the XS and XS Max which have dual-rear cameras). Storage is up to 256GB and Apple says the battery life will last 90 minutes longer than the Phone 8 Plus.

The iPhone XR will be available for preorder on October 19 and available in stores on October 26. It starts at $1,029 (CAD). 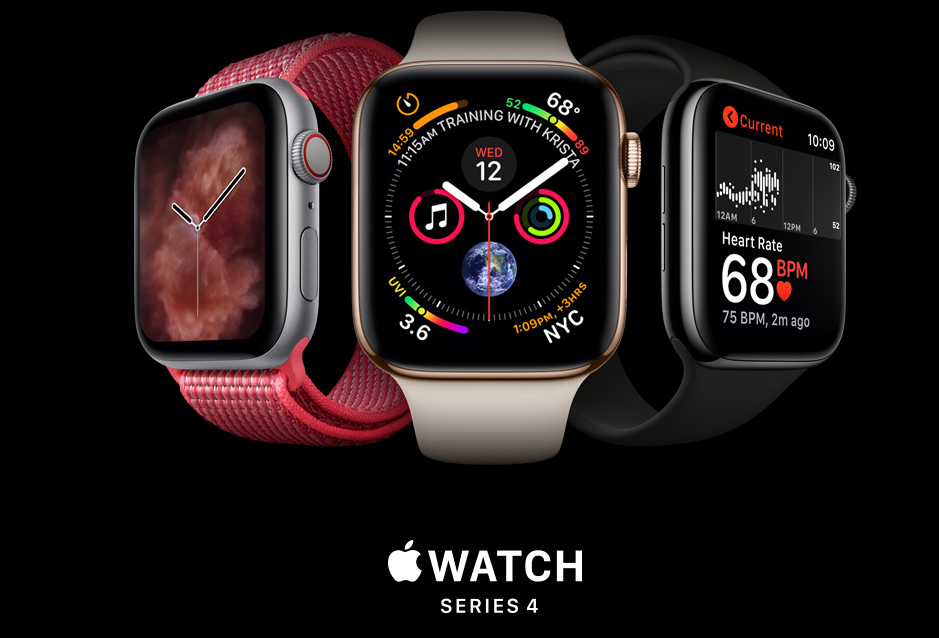 The screens are said to be 30% larger and the speakers are expected to be 50% louder. The Series 4 has a new S4 chip and boasts a 64-bit dual core processor so it’s faster than the Series 3. It comes with health prompts and assistance too, including three new heart features to determine levels and notify if something is off or alarming. A new addition is that the sapphire crystal back has a electrode heart sensor tucked in it. Apple COO Jeff Williams gushed about these new electrodes, which will allow users to take an electrocardiogram.

Williams argues that “This is the first ECG product offered over the counter, directly consumers,” but it seems the feature will only be available in the U.S.

The Series 4 also comes with advance competitions where you can go head to head with users, a new accelerometer and gyroscope for detecting falls, and the Series 4 is said to boast an all-day battery life expected to last up to 18 hours.

Both come with the new design and health features.

FYI: Apple will no longer sell its Watch Edition collection.

“Simply put, the new #AppleWatch is moving from a trendy option to a clinical imperative.” @JohnNosta #quote #digitalhealth #apple pic.twitter.com/ryRTjbHMKT