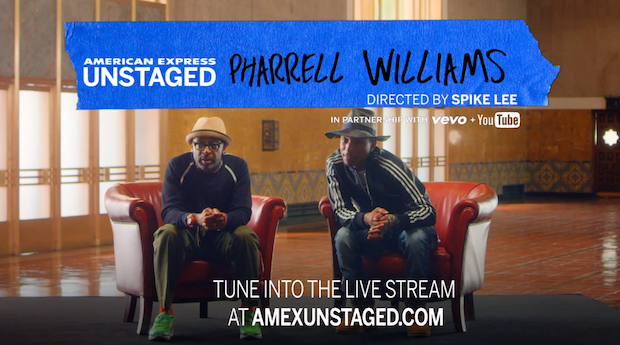 It’s with great pleasure and joy that we announce the return of American Express’ Unstaged concert series, this time with Pharrell Williams and Spike Lee. For those that aren’t familiar, the American Express Unstaged concert series was launched in the summer of 2010 in partnership with Vevo /YouTube and showcases breakthrough artists performing at landmark venues, while influential filmmakers direct a live stream feed of the performance. While watching the show you can be part of the interactive chat by Tweeting at @AmexCanada and posting to Facebook using the hashtag #AmexUNSTAGED.

Considering that this time around the pairing of talent includes Grammy award-winning, multiplatinum producer and singer-songwriter Pharrell Williams, and groundbreaking, Academy Award winning director Spike Lee, you know you’re in for a real show. This seemingly perfect storm of an event takes place at New York City’s historic Apollo Theater. Don’t have tickets and don’t live in New York? Don’t worry, you can still watch every second of the show from anywhere in the world and still get a front row view. How? Well simply tune in at 9:00 PM ET / 6:00 PM PT tomorrow, Tuesday, June 3 at AmexUnstaged, then pick your camera angle, because there is three, then sit back and enjoy the experience.

Before the show on Tuesday, be sure to submit a photo of yourself, at Amex Unstaged, it may be shown as part of the visual production on stage during Pharrell’s performance. Also, for the first time American Express Unstaged fans can receive a special, digitally autographed photo from Skateboard P by retweeting a message that will be released by American Express tomorrow, June 3. By doing this you have a chance to unlock a special piece of digital “Backstaged” content. This content will be available for the online audience and released on amexunstaged.com after the in-venue encore.

Come on, get pumped, it’s Pharrell and he’s in New York! You just know a veritable who’s who of guest appearances will make appearances through the course of the concert. Remember when he brought out the whole music industry at Coachella? So mark it in your calendar and we’ll see all of you online tomorrow.

This post was sponsored by Amex Canada. The views and opinions expressed in this blog, however, are purely my own.