Adrian Hayles: The Artist Behind The Yonge Street Murals 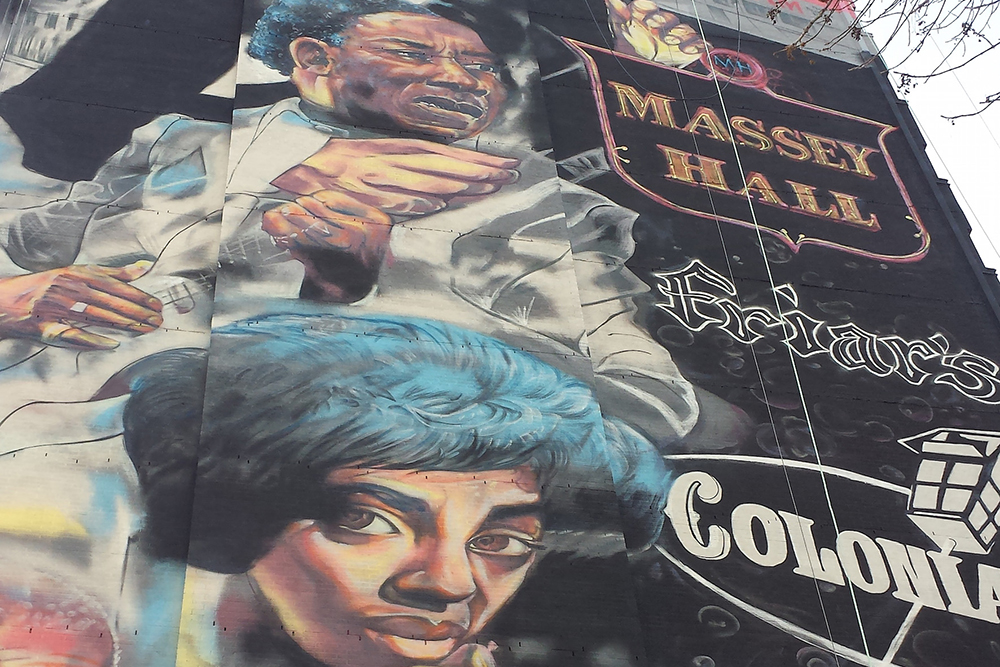 Toronto has its fair share of cultural post-its and one of the city’s ‘music mecca’ fixtures is Yonge Street’s 22-storey mural, which just so happens to be up for a Heritage Toronto Award this month. After a mighty selection process, the Downtown Yonge BIA (DTY BIA) commissioned Toronto artist Adrian Hayles to tackle the wall.

“It was pretty clear with the designs that Adrian came back with after consulting, that he captured the energy and the vision,” says Mark Garner, executive director and COO of the Downtown Yonge BIA. “His design work is second to none.”

The completed mural, which can be viewed on the north facing wall of 423 Yonge, features music icons from the ’50s and ’60s weaved with key signage from Yonge Street’s past. The coveted Le Coq d’Or (made popular by Ronnie the ‘Hawk’ Hawkins) and the famed Sam the Record Man sign are among the visual references. 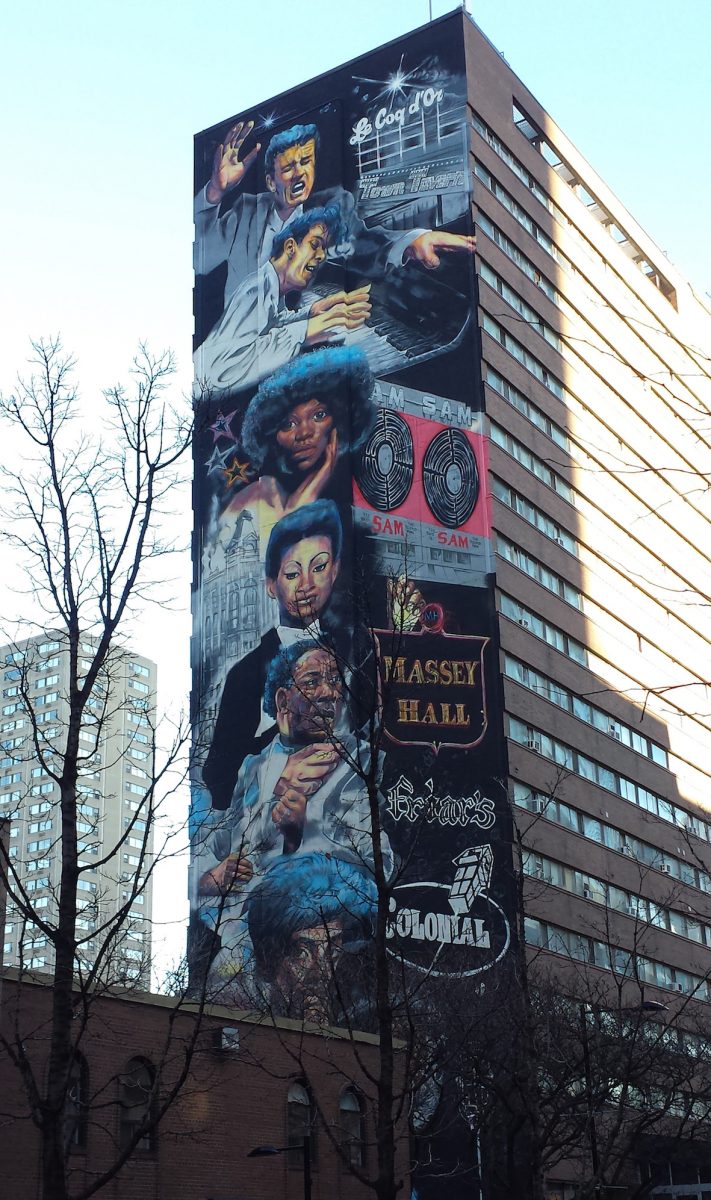 Yet, one mural can’t possibly detail all the music visionaries that played and partied on Yonge Street throughout the years, hence why a new mural is currently in production with Hayles once again at its helm. “We want to continue the legacy and that’s why we’re intermingling current day and past things and people, telling the story of music in Toronto, but also supporting the mural and art sectors,” explains Garner.

This opportunity couldn’t be a better meshing for Hayles too—music and art are a perfect wedding in his life. When he’s not working on sky-high murals, he’s teaching art classes or Dj’ing around the city.

“It’s really cool that the project is all related to music, it feels like the universe put both my passions together,” Hayles tells us. “I’m often listening to the music from these musicians while I paint, like I’ll be listening to Rush when I paint their faces. It’s as though the band is there in spirit.” 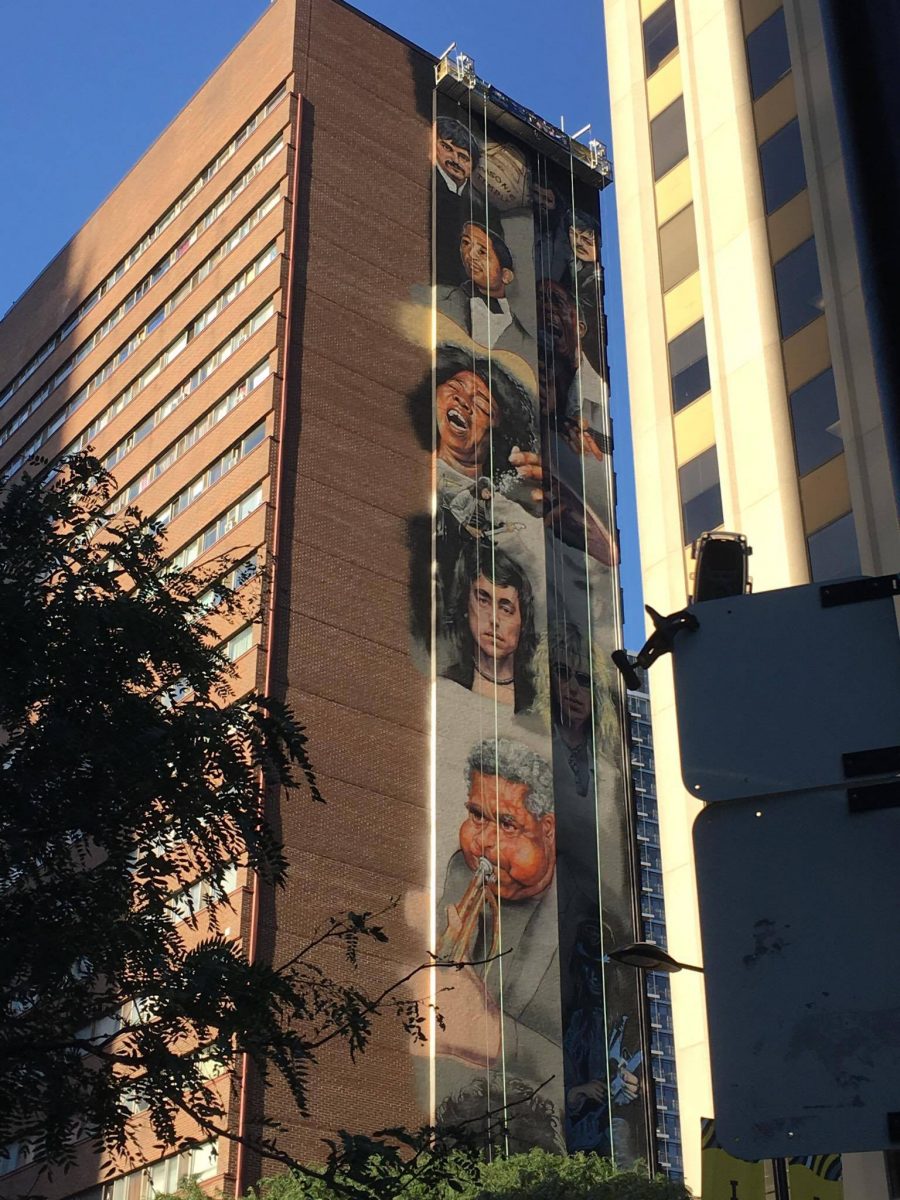 The new mural at 423 Yonge is on the south facing wall, and instead of nine featured faces as was seen in the first mural, this time over 20 faces will be showcased. These murals not only service the local community (apparently 175,000 people live on Yonge Street, according to Garner), but anyone who appreciates the impact music has had on Toronto’s downtown strip. 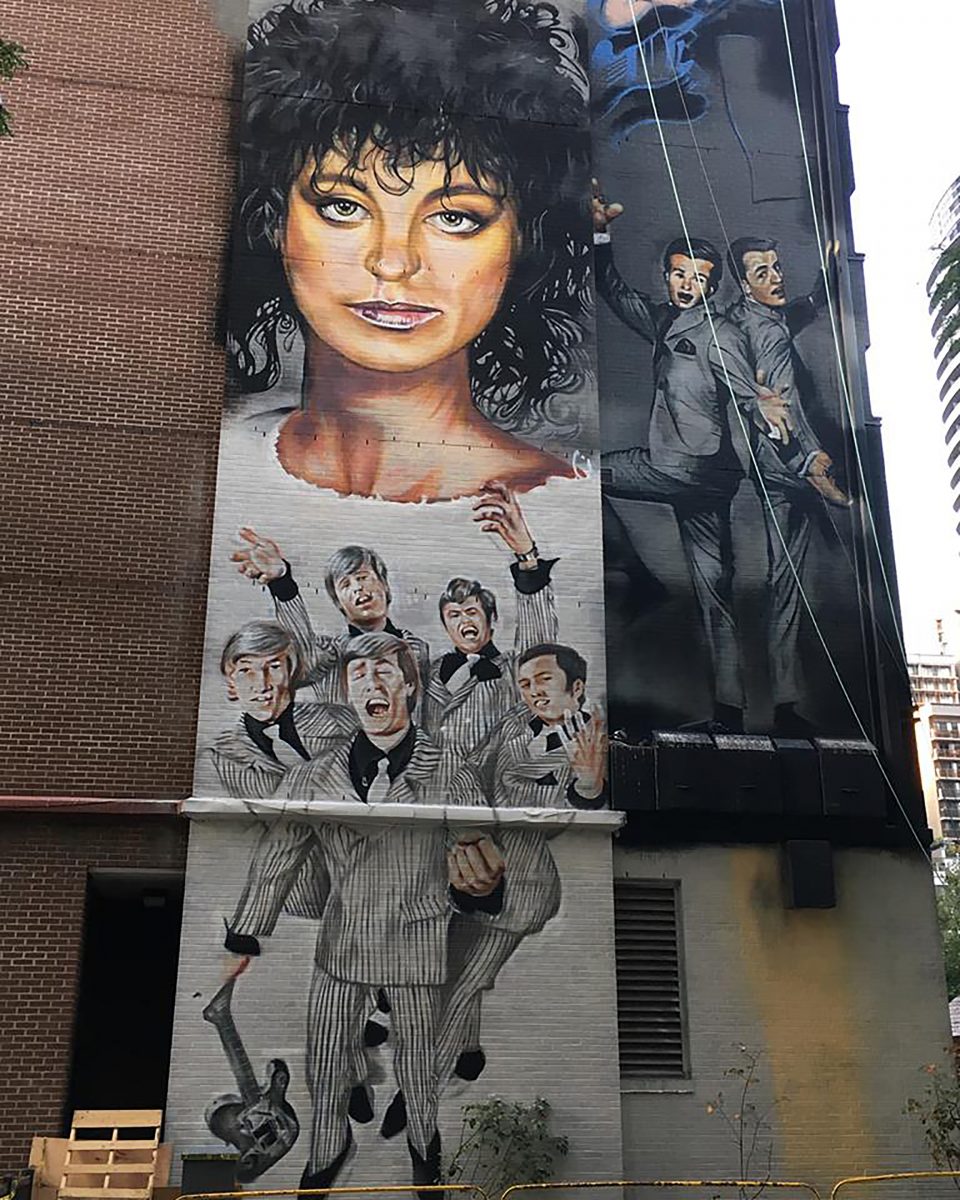 Hayles admits there was a bit of a learning curve his first time around, particularly trying to manage his style on such a large scale. Regardless of size though, Hayles says his work is always rooted in life drawings, which have been part of his visual arsenal for the past 30 years. He also has a background in graphic design. 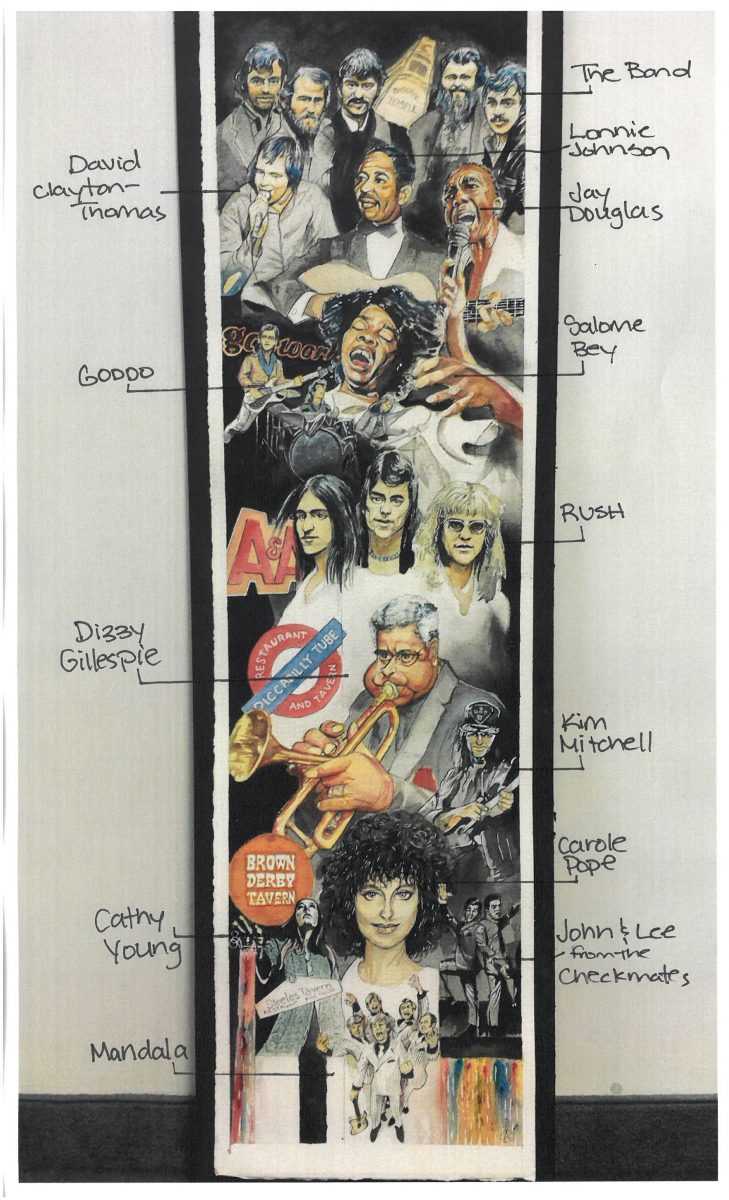 “Life drawing relates to and is always going to be my foundation so it doesn’t matter if I’m painting big murals or designing logos or animated bits, it all stems from having a strong constitution,” says Hayles. And while it may be quadruple the size, the wall is just another canvas for Hayles to play with.

“It’s so easy to forget when you’re up there, I mean when you start off all you have is a sea or brick right? You can only move back four maybe five feet if you want to see it, so you’re really immersed in the wall space,” explains Hayles. “Then you start cutting things in, separating the spaces, filling in the faces, the background. It starts to make more sense then; when you get more into the detail. It’s about not getting too carried away with one space and, rather, it’s more about breaking down each area, making sure proportionally and size wise, everything works.”

Much of his work could be seen as graffiti-like, but Hayles is quick to note that’s not completely accurate. “A lot of people try to link me with graffiti work but the thing with graffiti is there is a criminal element involved, so as soon as you’re getting commissioned for big murals or projects for the city, well, it kind of negates the whole graffiti aspect of it. I consider myself a mural, visual artist,” explains Hayles.

“One of my favourite artists is Norman Rockwell. I love how he’s really able to capture that moment and tell a really defined story with a quick synopsis of what’s happening in that time and space, he’s amazing.”

The mural is expected to be completed within the next couple of months, but check out the work in progress in person if you can.