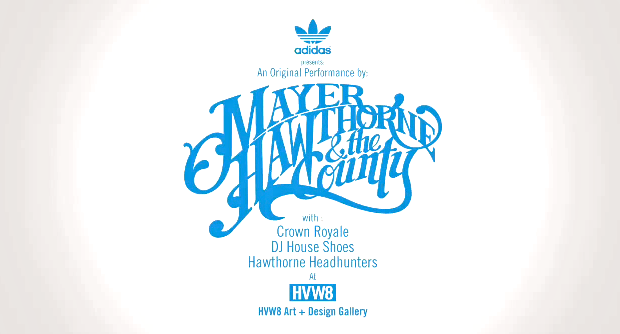 adidas, adidas, adidas, why are you so on point? Your collaborations are cutting edge, so shockingly on point, it has ceased to shock! How you have our attention and have left us fiending for more. Oh and here it is! adidad Originals teamed up with one of my personal favourite soul/R&B crooner Mayer Hawthorne, for a recent backyard blowout behind the HVW8 Gallery in L.A.Â  I love it! Check out the live video below, it looks like it was one helluva jam!

Here is what adidas had to say:

adidas Originals presents an Original performance by Mayer Hawthorne and The County at the HVW8 Art + Design Gallery.

Mayer Hawthorne is the new school soul sensation who counts his musical influences with the likes of Isaac Hayes, Leroy Hutson, Mike Terry, and Barry White, but draws the most inspiration from the music of Smokey Robinson, Curtis Mayfield, and the legendary songwriting and production trio of Lamont Dozier, Brian Holland, and Eddie Holland Jr.

Attendees walked through the front of the gallery and were treated to custom silk-screened tee-shirts courtesy of Hit and Run featuring Mayer Hawthorne and the County, adidas graphics, and artwork by emerging artists.

Guests were directed to the back of the building to the parking lot which was transformed into an open air pop up performance venue complete with a stage, white walls and black astro turf. Large-scale artwork from the HVW8 Art Installation was hung on the walls. 20 pairs of adiRise shoes were strung up on a large wire that spanned the width of the stage in alternating grey and white colors, with a massive mural featuring adidas and Mayer Hawthorne on the back wall. A viewing area equipped with a plasma television provided entertainment for those interested in the World Cup. Crown Royale, Hawthorne Headhunters and DJ House Shoes played before and after Mayer Hawthorne and The County performed an hour long set. All guests indulged in delicious soul food from Chef Alisa Reynolds and drinks were provided by Aashi beer, smartwater/vitaminwater, Hansenâ€™s, and Vita Coco.

So the only question left to be asked is, when is the Toronto adidas Original Jam taking place?