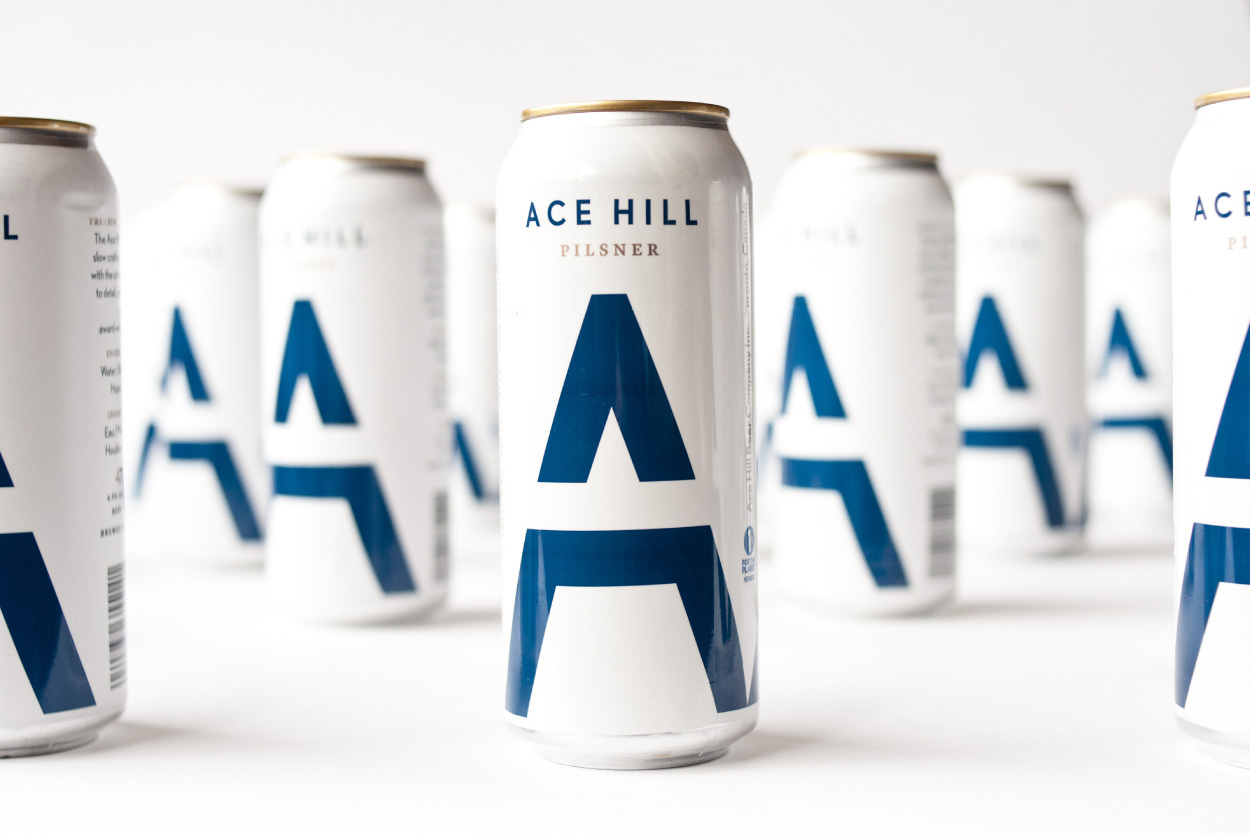 “We weren’t the first by any means to make a millennial branded beer, but we were the first in this neighbourhood to make it work.” – co-founder Richard Lambert.

He’s right, despite the odds of flopping in a city of burgeoning beer snobs – Ace Hill got it right. 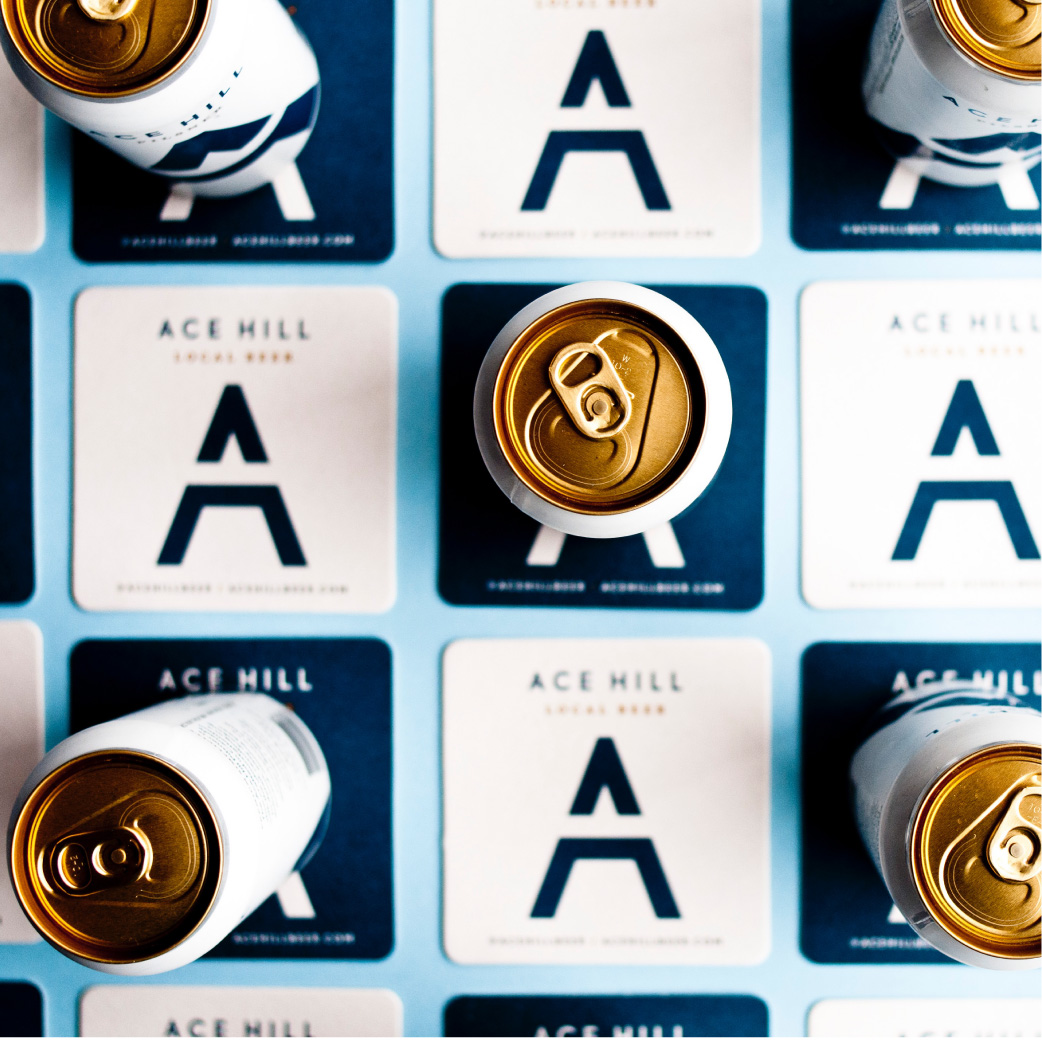 The story, like most beers, began with a guy in his garage. Blake Anderson, an earnest home brewer, crafted a single hop recipe inspired by a bohemian-style pilsner. The intention was simple: strip away the overpowering hops and focus on the backdrop flavours. The result was “crushable,” the kind of beer you could leisurely sip on a first date at Bar Raval or chug shamelessly in the last inning of a playoff push at The Dog and Bear. Striking the perfect balance between Noble Hallertau hops and Old World grains, the Ace Hill Pilsner was born: a non-offensive macro-micro hybrid with a sweet edge. By Anderson’s guess, it was a worthy player in the pilsner category; a small batch, naked beer with no bitters or bloat. He was right, the beer was amiable. 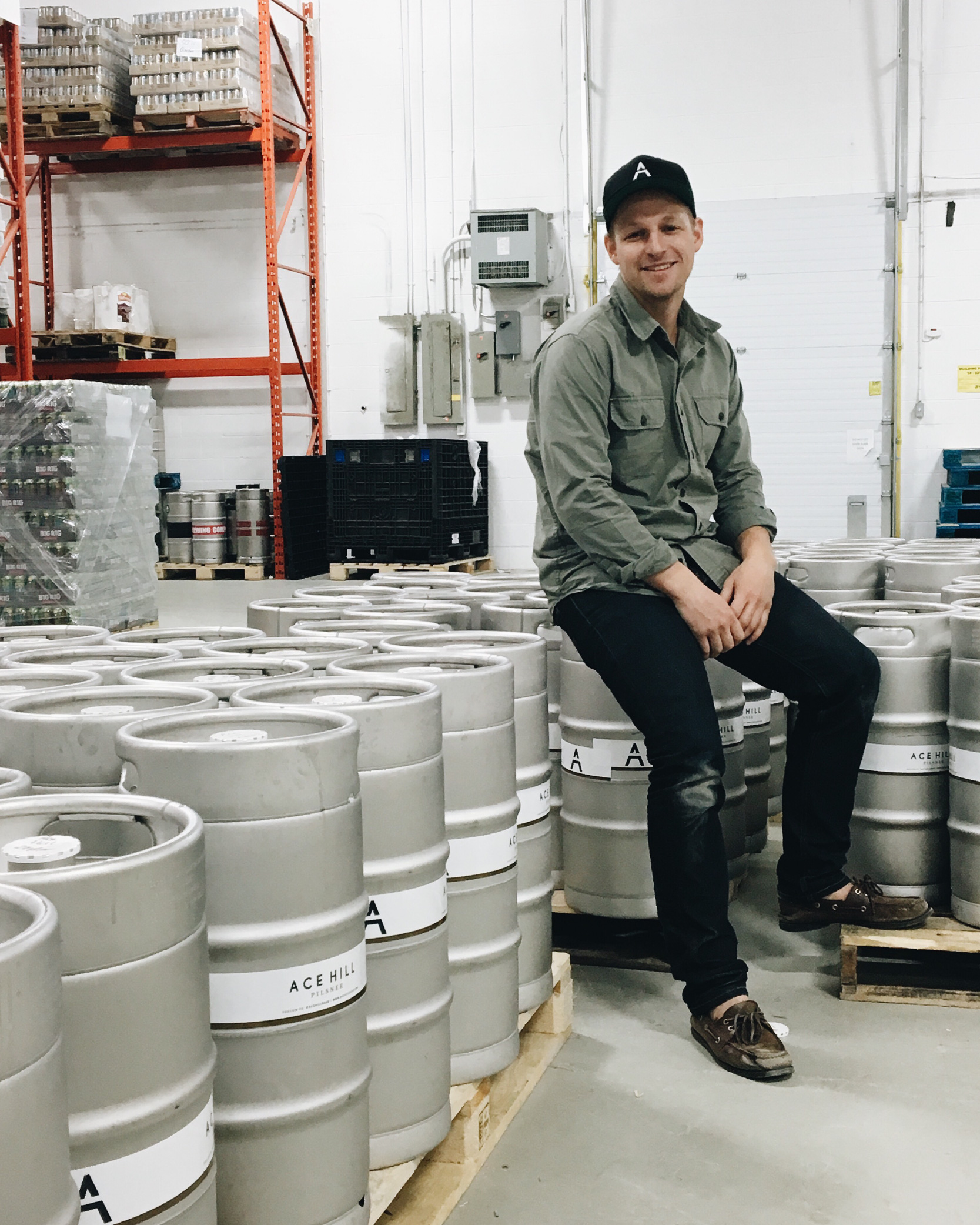 Crafting the finishing touches on the Ace Hill recipe, Blake teamed up with Noah Gill, former Marketing Director at Embrace Entertainment and Mike Wagman, a tech-savvy lawyer and co-founder of Rithm, “the Snapchat of music apps.” Banding together as co-founders, the Ace Hill team was near complete with the addition of two major players in the west-end nightlife scene, The Social Group’s Richard Lambert and Jesse Girard. Naturally, it all made sense. Ace Hill comprised a partnership representing influential purveyors in hospitality and music industries. The final and most important link was Berkeley Poole, a virtuoso art director that turned Ace Hill into a sleek brand imbued with élan. Ace Hill found its sex appeal. 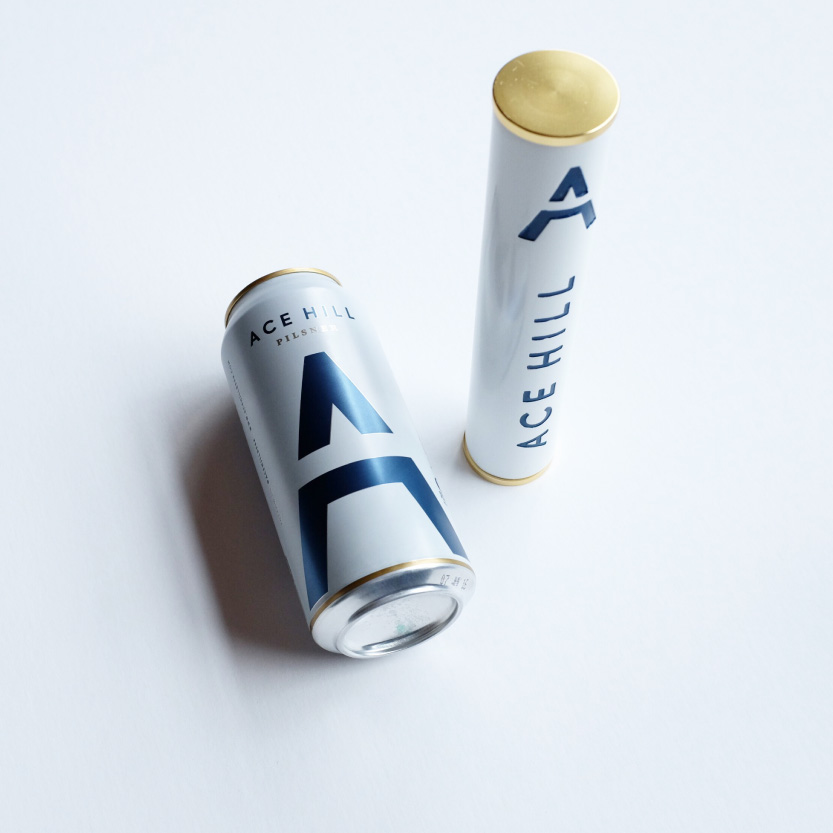 Marked by its royal A, the Ace Hill brand plays off the simple pleasures of Toronto’s middle class. It’s everywhere millennials flock to, whether it’s a grand opening of a storefront, art showcase, cocktail bar, sold-out concert or music festival. A brand born from minimalism, if it wasn’t for style, Ace might not be where they are now, and they’re not afraid to admit it because they never intended to impress beer snobs.

“Even if the product was brilliant, if the branding sucked, we wouldn’t be sitting here talking about this,” says Richard.

Take it from an entrepreneur who shaped Toronto’s west-end nightlife, branding is everything. The most important thing is that Ace Hill stands out in a craft beer lineup, it looks sharp and it’s smart.

To outsiders, Ace Hill made it look too easy. Behind the scenes, the team knew what they were doing from grassroots marketing, tactical partnerships and visibility at parties. Sure, there was the old boy network of Richard and Jesse’s connections, but it takes more than shameless self-promotion to make a modest profit off a low-key pilsner. With this in mind, the team partnered with brands that fit the look, feel and lifestyle of the Ace Hill consumer – making itself readily available at parties hosted by entrepreneurs, business owners, visionaries and “true” influencers.

“We want to align with other brands we like,” says Mike.

It’s no coincidence that Ace Hill is a go-to drinking choice for the rich, cheap, cool and corporate. It’s a hyper-local campaign with multi-property partnerships (like The Drake, for example) and strong ties to event spaces like Free and East Room. They knew where to find thirsty millennials, and their roster includes a gamut of locations from The Four Seasons to Kensington’s beloved Ronnie’s. It’s everywhere you look from a hole in the wall bar, dance hall to fried chicken joint. That’s the beauty of it. 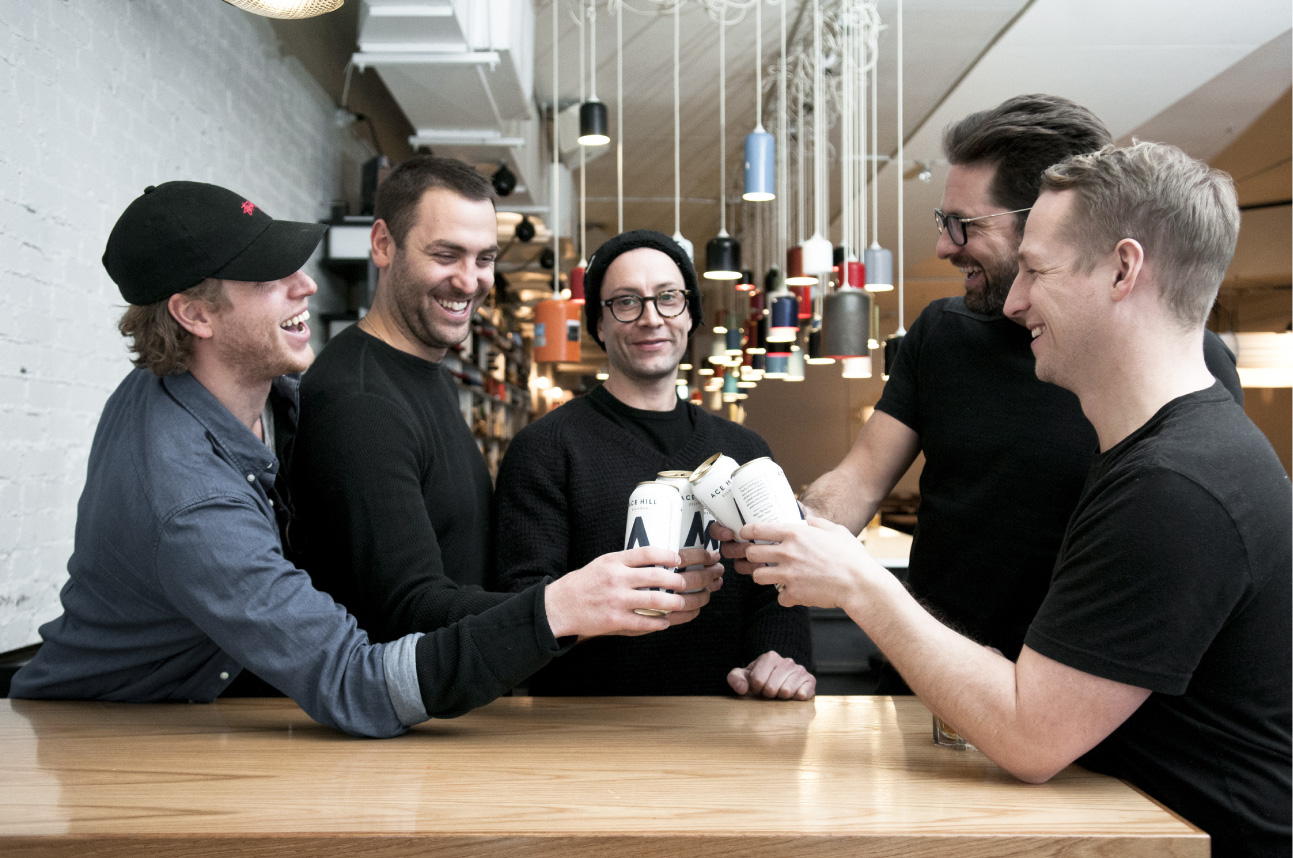 The truth is, Ace Hill had more to prove than other beer brands. They pissed the skeptics off because they guessed where the market was going and they were right about it. Now in the second year of business with arms stretching beyond the west-end core, Ace’s team is eager to bring the easy-drinking pilsner outside of the GTA. “Our brand is our community,” explains Mike, and that means re-creating what they’ve done in Toronto in other cities.

“We want to be able to service people outside of Toronto, so next step for us if figuring out a good infrastructure to get our beer outside of the GTA and more places that want it.”

Reminiscing with the co-founders about the year in review, Ace Hill is a case study of clever millennial marketing. The brand is an androgynous libertine, the common thread between the Bay Street lawyer, starving artist, creative class and Yorkville yuppies – there’s cache in its ambidexterity, designed to make young people feel sophisticated and old people look cool. It’s their stake in the middle as micro-macro that makes them so superior to craft beer competitors; they’re not trying to impress the pretentious elite, they’re tapping into a larger audience that’s conventional, confident and easy-going. Hate it or love it, it’s a mainstream beer that people want to drink and be seen with. 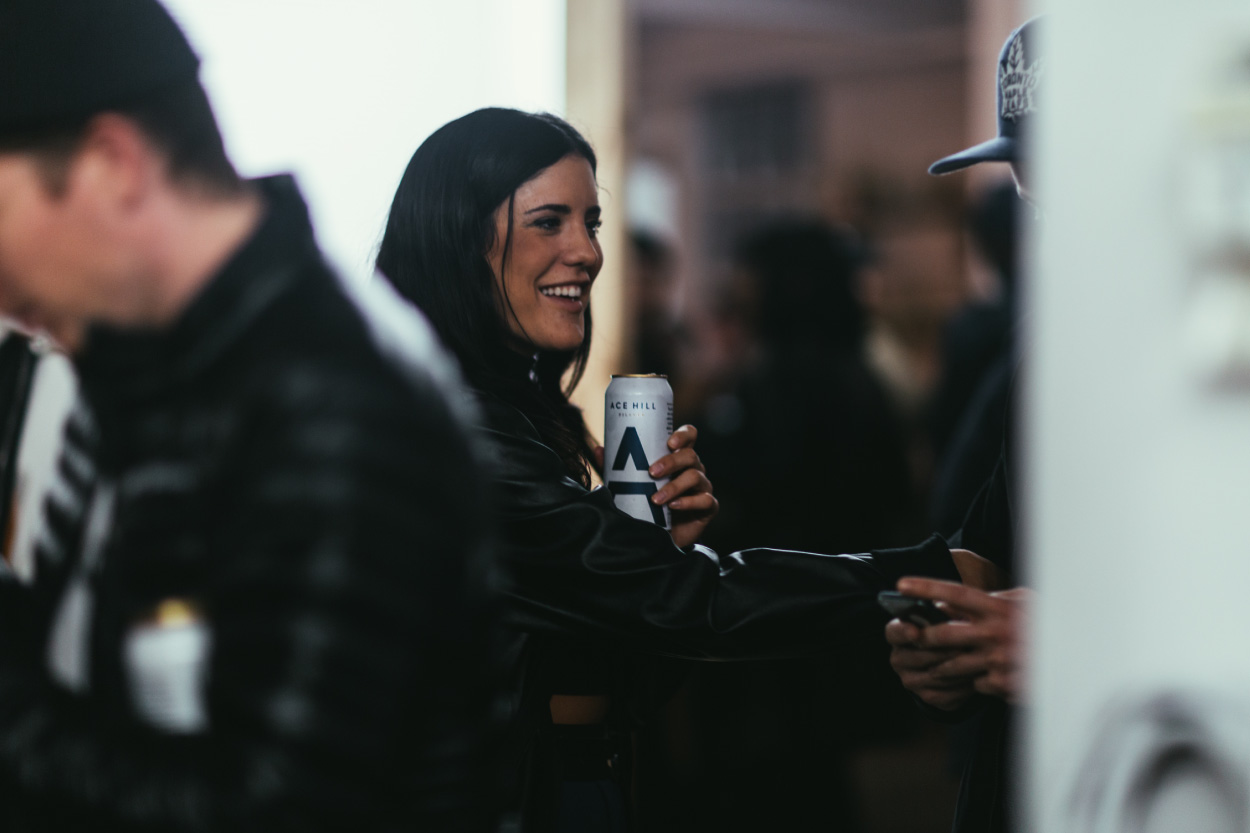 If I asked you to bet on the future of Ace Hill a year ago, the odds were favorable, but not fixed. Blake Anderson knew how to make a good pilsner, Mike and Noah excelled in millennial marketing and Richard and Jesse owned an empire of loyal patrons. Against the odds of flopping in a competitive market of grandiose craft beers, they did everything right. They proved themselves as an easily likable brand with values, mainstream charm and slick branding. Toronto needed a pilsner with style, substance and street credibility. Ace Hill was the answer.