Every year we are inundated with new technologies: tools, games, gadgets, audiovisual experiences, which stretch our imaginations and curiosities. Rapid changes make for accelerated ideas into action, and we’re all about new technologies and how they take on everyday life. We’ve recently expressed our favourite picks from CES 2018, ranging from new tech-equipped apparel to a portable recording studio, but there’s more.

Here’s what we’ve been noticing, hearing and learning about the role tech will play in 2018.

Blockchain technology is commonly associated with cryptocurrency, and this technology focuses on securing transaction management, decentralizing trust and allowing for more transparency among such transactions. “All transactions are visible on the blockchain” is a tagline often touted. But, its impact stems beyond just the cryptocurrency sense. Companies like Walmart have employed blockchain pilots, one that traced some mangoes, for example. Using traditional tracking methods, it took seven days to determine where the mangoes had come from. If a blockchain was used it’s estimated these details would’ve been confirmed in seconds.

Now, think about other ways we could use blockchain technology in everyday life. Real estate transactions, safer gambling, marijuana, too. Is it any surprise that IBM sent a sweet little letter to the B.C. government, proposing the regulation of marijuana in Canada be done through blockchain technology? Anything that has to do with authenticating a transaction and securing its distribution could turn to blockchain, and in 2018 we’re bound to see more companies like Walmart, JPMorgan and now FedEx joining companies doing business through blockchains.

Realms will continue to be explored through virtual reality (VR); take the upcoming XXIII Olympic Winter Games where NBC has committed to more than 50 hours of live virtual reality coverage, as an example. Cirque du Soleil wants you to “plan your escape” through their VR app, which allows viewers to experience travelling shows as if they were there.  Spheres (a video series where viewers explore sound and space in VR), which was one of our go-to picks to catch at Sundance this year, was acquired by VR financing and distributor CityLights in an unprecedented seven-figure deal. Co-producer of Spheres, Arnaud Colinart championed the deal saying it was a “historic moment for the VR industry; it signified a viable storytelling medium has emerged.” Also previewing at Sundance was DINNER PARTY, a virtual reality project about the “first widely publicized report of an alien abduction in America” so that’s kind of neat.

New headsets will continue to emerge — take Facebook’s next-generation ‘Project Santa Cruz‘, which comes with no wires and needs no connection to a computer, giving more freedom to the user to move about. Zuckerberg is betting on VR and standalone headsets, such as the Oculus Go, and Lenovo has its new standalone VR headset, the Mirage Solo, too. We’re keeping our eyes on Lenovo in general this year.

Sick of dressing yourself in that Ikea mirror of yours? Don’t worry, Amazon has you covered with its new AR Mirror. A camera rests on top of the mirror to capture the user’s body and then you can switch up your background as you please — go to the beach and figure out what to wear there. It provides a blended reality so users can test out their looks while feeling like they’re actually wearing the clothes, well as much as you can actually wear virtual clothes that is.

Facial recognition has been used for recording attendance in elementary schools, Apple’s been betting on its Face ID, which has proved hard to crack, and just this week food retailer Cargill announced a partnership that would begin a face recognition pilot on cows. The technology will be used to track cows appetites and behaviours. This information will then be sent back to farmers to help improve efficiency among operations.

Back in September 2017, a Stanford University professor Michal Kosinski suggested that based on photos, artificial intelligence (AI) could detect if a person is gay or straight. According to Kosinski, the algorithm used “online dating photos to create a program that could correctly identify sexual orientation 91 per cent of the time with men and 83 per cent with women, just by reviewing a handful of photos.” The professor also pointed to algorithms that could help identify political views of people, as well as IQs and those “predisposed to criminal behaviour.”

“The face is an observable proxy for a wide range of factors, like your life history, your development factors, whether you’re healthy,” said Kosinski.

So, will facial recognition and biometrics become the norm when checking in at hotels?Or for picking up tickets? Unlocking cars? Boarding flights? There’s a lot of possibility and we’re interested to see how it pans out in 2018.

Google CEO Sundar Pichai recently said artificial intelligence is “more profound than, I dunno, electricity or fire,” so there’s that. Let’s not forget the man who continues to drive home the importance of preparing for the role AI will play in human activity for decades to come, Elon Musk, though. *bows head* 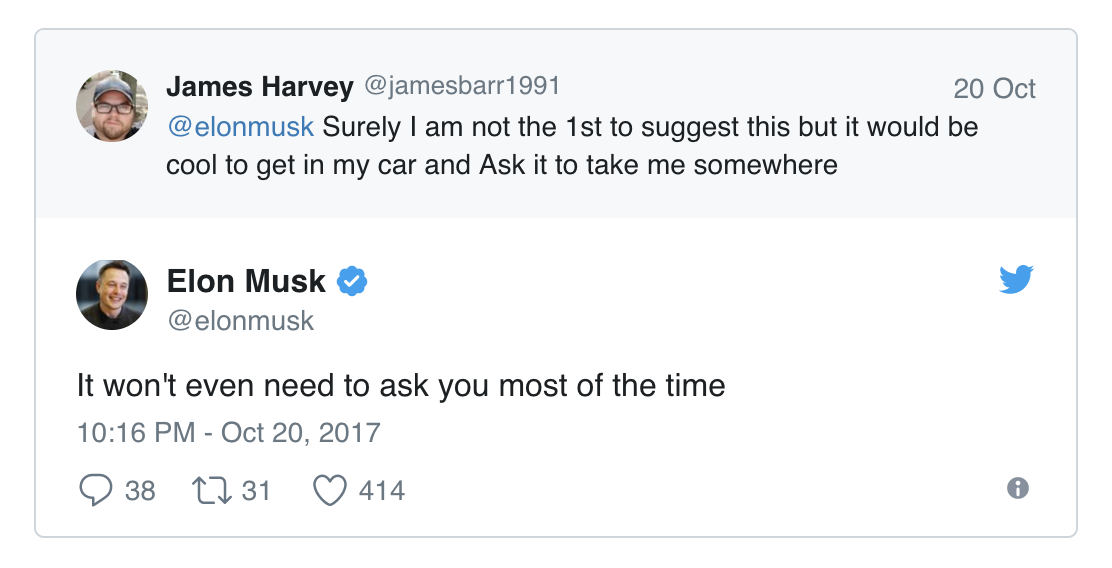 Musk has also talked about flying cars such as the second-generation Tesla Roadster, expected out in 2020. The first batch of Roadsters cost $250,000 each and come with a 200 kilowatt-hour battery pack. Musk said the new Roadster would go from 0 to 100 mph in 4.2 seconds.

But, then there’s the fear we’re all going to become lonely, useless piles of muck thanks to robots.

Do we welcome AI or fear it? 2018 should help us consider this conundrum more.

Companies like ynvisible are all in when it comes to their electrochromatic displays, which can be printed onto paper or plastic forming the “face of every smart label” as they put it. Combined with sensors that detect things like temperature and movement, and the displays bring “functionality and life to smart products.”

Back in the grocery store we’re going to notice more and more smart labels in hopes to gain consumer trust. As David Luttenberger, the global packaging director for Mintel puts it “the older we get the less we believe what a brand is trying to convince us of.” Luttenberger points to voluntary programs like SmartLabel, which is quickly gaining popularity as a new way to build that consumer trust. So RFID labels, EAS labels, NFC tags–get familiar with these as you’re going to see more of them in 2018.

According to Zion Market Research, this flexible electronics market is “expected to generate revenue of US$16.50 billion by the end of 2021,” and IDTechEx added that the “total market for printed, flexible and organic electronics will grow from US$29.28 billion in 2017 to US$73.43 billion in 2027.”

Entertainment Software Association of Canada released a report on the Canadian gaming industry. The report states that studios and developers have contributed CAD$3.7 billion to Canada’s GDP in 2017, a 24 per cent increase from 2015. Also, 21, 700 direct full-time jobs were created, moving up six per cent since 2015. Of the companies surveyed, 50 per cent indicated they created at least one process innovation in 2017, and 23 per cent of video game developers were currently working on a VR game in 2017 (up seven per cent since 2016).

Gaming and VR continue to become closer companions and although Xbox’s Kinect has been discontinued, its capability is perhaps the future of gaming, according to Chang Toy, co-owner of Toronto’s A&C Games, a staple in the city for over 15 years.

“Kinect is the future because we want to be in the actual gaming world and the camera can capture that, it captures your whole body,” he says.”VR does that with the lens over your eyes but that seems like we’re going back because you have to wear goggles to give the effect. The future you wouldn’t need something like that, and probably with a combination of the Kinect camera and a projector to project the screen in the background you can be in the game. Not sure how long, but it’s getting closer.”

Companies like Oakville, Ontario’s StudioMDHR can be looked to for innovation and relevance as their game Cuphead was a serious hit in 2017, selling more than 2 million copies across multiple platforms including Steam. At the 2017 Video Game Awards, StudioMDHR won for Best Art Direction, Best Independent Game and Best Debut Indie. What’s cool about them is how they forge a love for 1930s cartoons by utilizing practices from the era: hand drawn cel animation, watercolor backgrounds, original jazz recordings, and then they combine that with modern details like hitboxes, screen movement and input response.

Amazon and Google like to occupy this space, they know having a voice-enabled smart assistant can provide practical help and some fun to the everyday. Alexa, who is all about answering questions recently picked the Philadelphia Eagles to win Super Bowl LII, and Google Assistant just announced it can now set alarms to music and look up TV schedules. So, if you want to wake up and hear a little Kendrick right at 5AM, you can. These devices will continue to aid with communication, learning, household prompts and so on, but it will be interesting to see how such tech is incorporated outside of the home, among businesses, during meetings, at events etc. Will we be able to tell Alexa to edit in our b-roll or create a game by the sound of our voice someday? That would be nice.